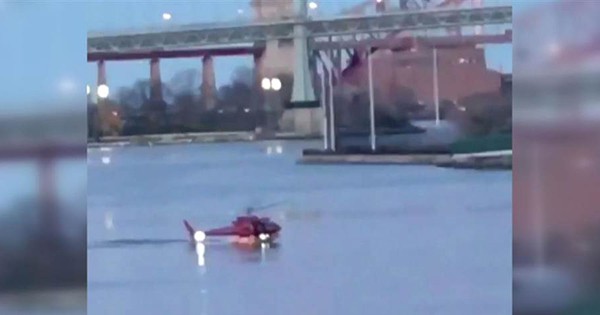 5 people have died after a helicopter experienced engine failure while flying through the New York City East River on Sunday evening. The helicopter was upside down and submerged completely when emergency responders reached the scene. A bystander was able to capture the incident on video which he posted on social media.

@cnn @FoxNews just witnessed a helicopter crash into the East River .. hope everyone’s ok. Caught it all on tape! pic.twitter.com/saHOMTLR69

The chopper was said to have been chartered for a private photo shoot. The pilot was able to cut his harness and flee from the crash site. He boarded a tug boat near the area.

Two passengers were declared dead at the scene while the three rescued were critical. The rescue team rushed to save the passengers but had a difficult time due to the tight harnesses. Though the remaining passengers were rushed to nearby hospitals, they were not able to survive their injuries.

The group was flying with Liberty Helicopters tours, a company that provides a sightseeing and charter service in New York City. The company has been in business for over 30 years, however this has been their third crash in 11 years.

Authorities have said that a barge with a crane is set to pull the chopper out of water. An investigation will be done by the National Transportation Safety Board on Monday morning to check the pilot’s training, experience, and immediate response during the crash. The NTSB will also be reviewing the probable cause of the crash and what environmental factors may have contributed to the incident.