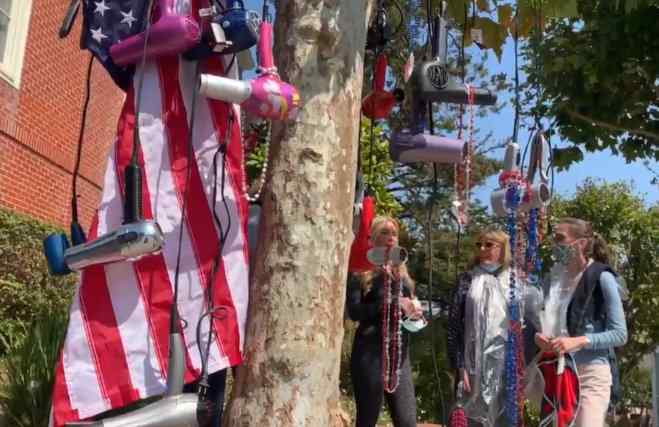 They strung hair curlers and blow dryers in indignation over the fact that Pelosi was able to go to a salon and get her hair done while everybody else couldn’t because of coronavirus lockdown measures.

San Francisco Chronicle reporter Jessica Christian wrote on Twitter, “Protesters have gathered in front of Nancy Pelosi’s San Francisco home and are stringing up curlers and blow dryers on a tree after a video surfaced of Pelosi getting her hair done indoors/maskless at a SF salon.”

None of these demonstrators in front of Nancy Pelosi’s home are salon owners or workers. They’ve all described themselves ‘angry salon customers’ who want to get their hair and nails done.”

The owner of the salon, Erica Kious, rebutted the Speaker’s claim that she was “set up.” She told Fox News host Tucker Carlson that Pelosi was the one who set up the appointment.

“She had called the stylist, or her assistant did and made the appointment, so the appointment was already booked, so there was no way I could’ve set that up. And I’ve had a camera system in there for five years. I mean, I didn’t go in there and turn cameras on as soon as she walked in to set her up. So that’s absolutely false,” Kious explained.

When asked how it felt to have the most powerful woman in American politics attack her, Kious responded, “To be honest, it was more hurtful.”

“She’s been coming in for quite a while, and just to see her come in and especially not wearing the mask, that’s what really got to me, but this isn’t even political. She’s been coming in there. It’s the fact that she actually came in and didn’t have a mask on, and I just thought about my staff and people not being able to work and make money and provide for their families, and if she is in there comfortably without a mask and feeling safe, then why are we shut down? Why am I not able to have clients come in? So, it’s been hard.”