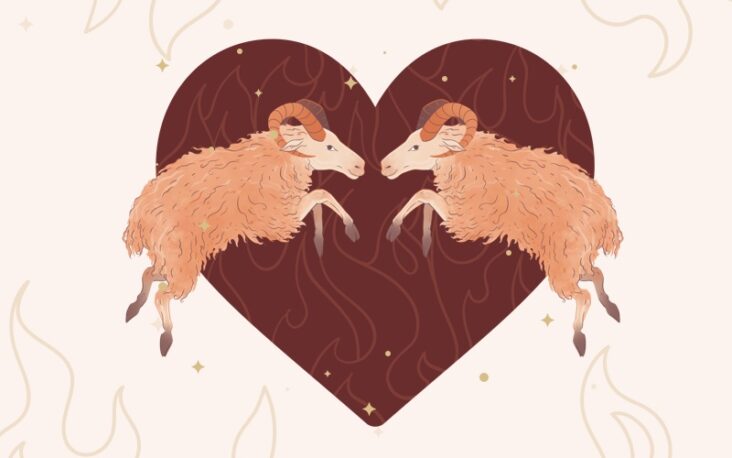 Aries is a sign of new beginnings, and when two Aries come together, they can create an exciting and energetic relationship. They are both independent and confident, which can make for some interesting power struggles. However, these two signs also have a lot of positive energy to give each other, and they will never be bored in this relationship.

When it comes to sex, neither Aries partner will shy away from getting their clothes off and letting the sparks fly. However, the same headstrong and confident energy can also manifest as selfishness, leading to fights or disagreements. This can be a potential problem for an Aries couple. The solution is simple – with more care and consideration for one another, an Aries couple can make their sexual and intimate relations work to their own and each others satisfaction with great success.

Trust is not something that comes easily to these two. They are both very independent and headstrong, which can make it difficult for them to trust anyone. In addition, they are both very jealous and possessive, which can lead to a lot of mistrust in their relationship.

The most important ingredient for a strong friendship is mutual respect and understanding. And while two Aries may clash from time to time, they will always come back to each other because they understand each other so well.

Aries are natural leaders, and when these two signs come together, they can accomplish great things. They are always ready for a new adventure, and their shared sense of enthusiasm will keep them bonded.

The way these two communicate is often the source of many problems in their relationship. Since they can both be quite impulsive and tactless, they can easily hurt each other’s feelings without even intending to do so. On the other hand, they are both very honest and direct, which can be a good thing if they learn to control their words and use them more constructively.

In general, communication between two Aries is rarely calm and constructive, but it can be a lot of fun. These are two people who enjoy debates and intellectual games, and they are both quick-witted enough to keep up with each other. As long as they don’t start using their words as weapons, they can have a lot of fun together.

Even though they are both passionate and enthusiastic, they can sometimes lack emotionality and depth. This is not something that bothers them much, as they are both more interested in action than in emotions. However, when they do get emotional, they can both be quite overwhelming.

These are two signs that like to be in control of their emotions, and they can have a hard time dealing with the emotional nature of their partner. They need to learn to accept each other’s emotions, even if they don’t understand them. Only then will they be able to create a truly intimate and connected relationship.

Even though they are both independent and self-sufficient, they still need to feel like they are a part of something larger than themselves. This is why family and friends are so important for them. They need to have people in their lives who will support and love them unconditionally.

As far as values are concerned, this sign believes in freedom and independence, and keeping things honest yet direct. They are both very loyal to their family and friends, and they will always be there for the people they care about.

Aries is a sign of initiative, and these partners will usually have no problems starting anything new. The energy they radiate is highly contagious, so it is not surprising that their relationship feels the same. When two Aries come together, they will quickly find things they enjoy doing together and they will never be bored.

However, this need for excitement and adventure can sometimes get the best of them. If they don’t find ways to channel their energy, they can quickly become restless and irritable. It is important for them to find a balance between together time and alone time, or they will start to feel suffocated.

When two Aries come together, it can be a lot of fun. They are both independent and confident, which can make for some interesting power struggles. However, these two signs also have a lot of positive energy to give each other, and they will never be bored in this relationship.

If they can learn to communicate constructively and control their impulsive nature, they can have a very passionate and exciting relationship. However, if they can’t find a way to compromise, their relationship will be full of conflict and drama.