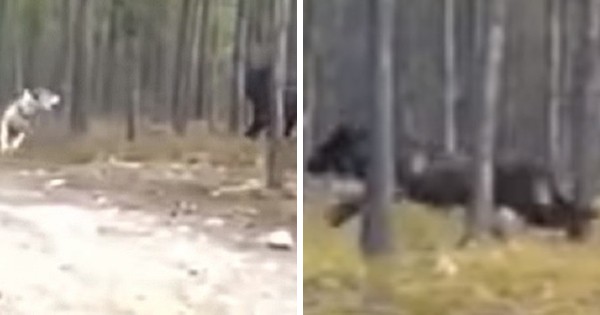 Chris Street, from northern Saskatchewan, recently posted a terrifying video of a black wolf-like animal attacking a dog in the woods.

The footage was taken near the fishing lodge where Street works as a fishing guide. He said that it’s not uncommon to see bears in the area.

But just by looking at the figure hiding behind the trees, seemingly stalking the dog, the creature wasn’t a grizzly.

“I shot this video on one of our trails around the lodge,” Street said.

“We get a lot of bears that come around the lodge but this year we had a black wolf that started to come around for a few days.”

“We spotted the wolf through the window of the kitchen in the lodge and I made my way outside with the camera. The lodge manager Dan went for the shotgun.”

“When I started to take pictures the wolf left, then returned a few minutes later and that’s when Trigger took after the wolf. The wolf waited for Trigger to turn away from him and that’s when he grabbed the dog in the back end and threw her up in the air right in front of me,” he added.

“Dan shot the shotgun into the air and that broke the fight up. The wolf turned and left, we followed the wolf into the bush and shot again to scare him off.”

While the end of the video may have not shown what happened after the fight, Street assures that the dog is none the worse for wear.

“The wolf came back two more times that day looking for the dog we think. Trigger had a few good wounds and cuts but she is fine now,” he said.

It’s likely that the creature was a timber wolf, a type of black wolf which named so due to their color, which was a result of wolf-dog hybridization from thousands of years ago.