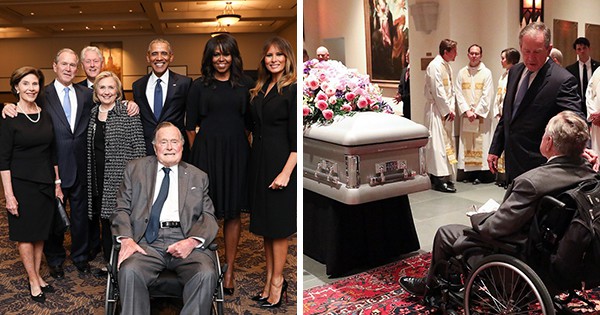 Former presidents and first ladies gathered together on Saturday, April 21, to pay their last respects at the funeral of former first lady Barbara Bush who died last Tuesday at the age of 92.

There were around 1,500 mourners who were at Houston church for her funeral. The four presidents and first ladies struck a pose in front of Paul Morse, who was the White House photographer during President W. Bush’s administration.

In the photo are Bill and Hillary Clinton who stood next to the Obamas, Barack and Michelle. George W. Bush and his wife Laura stood next to the Clintons while the elder George H.W. Bush was sitting in front of the whole group.

Current First Lady Melania Trump was also in the photograph but, President Donald Trump was not at the funeral. The White House released a statement saying that the president wouldn’t attend to avoid disruptions due to added security, and out of respect for the Bush family.

Trump also tweeted that he will be staying at Mar-A-Lago, to watch the funeral service there.

Heading to the Southern White House to watch the Funeral Service of Barbara Bush. First Lady Melania has arrived in Houston to pay our respects. Will be a beautiful day!