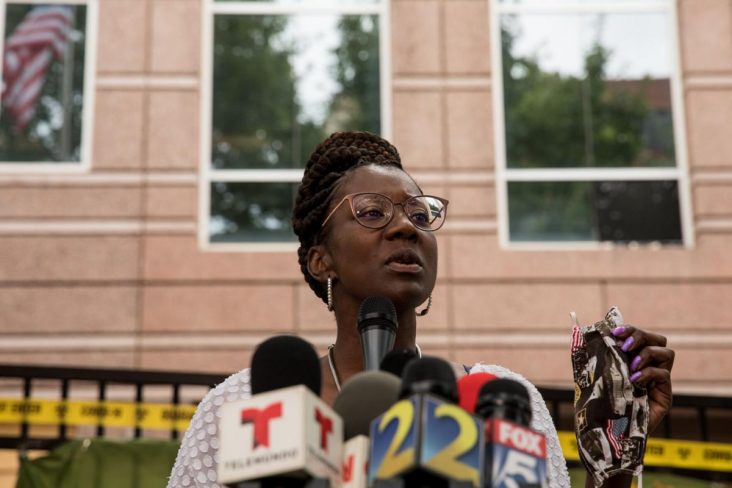 Nurse Dawn Wooten spoke out about alarming conditions at a U.S. Immigration and Customs Enforcement detention center in Georgia.

Democratic lawmakers have called for an investigation on alleged forced hysterectomies and other instances of “jarring medical neglect” at an Immigration and Customs Enforcement (ICE) detention center in Georgia.

The development stems from the revelations of a whistleblower, Nurse Dawn Wooten of the Irwin County Detention Center,  who said mass hysterectomies were performed on immigrant women without their consent at the Georgia facility.

Wooten also said the ICE center refused to test detained immigrants who had been exposed to the coronavirus or who were symptomatic for COVID-19.

Congressional Hispanic Caucus Chairman Joaquin Castro lauded Wooten for her “courageous choice to speak up” and called out the Department of Homeland Security (DHS) inspector general to “immediately investigate these serious allegations.”

In a statement, Castro said, “These horrors must not remain hidden. The American people need to know exactly why and under what conditions that vulnerable women in ICE custody underwent hysterectomies.”

“Were Trump administration officials aware of any coerced procedures, and if so, what actions did they take, if any, to stop this abuse? Congress is already examining this disturbing complaint, and the DHS Inspector General must immediately investigate these serious allegations by conducting thorough on-the-ground inspections and not relying on statements from ICE agents and private contractors,” he added.

“This whistleblower complaint is stunning and, if true, paints a disturbing picture at the Irwin County Detention Center. Given the serious nature of the complaint, I urge your office to immediately conduct a thorough in-person investigation of the Irwin County Detention Center—including in-person interviews with relevant witnesses following Centers for Disease Control and Prevention COVID-19 guidance—and to further investigate DHS leaderships’ knowledge of the allegations as well as their possible involvement in the abuses,” Booker said.

The senator likewise asked the inspector general invetigate whether the same ‘malpractices’ are happening at other ICE detention centers across the U.S.

“The misconduct described here echoes forced sterilization campaigns of the past conducted by some of history’s worst villains. We as a nation are better than this return to long-rejected violations of human rights,” Blumenthal said in a statement.

Speaker Nancy Pelosi added that “if true” these allegations “are a staggering abuse of human rights,” and calling for an immediate investigation.

“This profoundly disturbing situation recalls some of the darkest moments of our nation’s history, from the exploitation of Henrietta Lacks, to the horror of the Tuskegee Syphilis Study, to the forced sterilizations of Black women that Fannie Lou Hamer and so many others underwent and fought,” Pelosi noted.

House Majority Leader Steny Hoyer said, “If it is indeed true that immigrant women were forced to undergo hysterectomies without proper consent or proper medical cause, every individual who was involved in that undertaking — up to the highest levels — must be brought to justice. Such crimes would be reminiscent of … some of the bleakest moments in history, when the dignity of human life was violated by those who so callously viewed people of different races, religions, or origins as lesser. There must be an immediate investigation into this horrific allegation.”

A spokesperson for ICE issued a statement saying the agency “does not comment on matters presented to the Office of the Inspector General.”

“ICE takes all allegations seriously and defers to the OIG regarding any potential investigation and/or results. That said, in general, anonymous, unproven allegations, made without any fact-checkable specifics, should be treated with the appropriate skepticism they deserve,” the spokesperson added.

On Monday evening, ICE said it is “firmly committed to the safety and welfare of all those in its custody.”

“Since the onset of reports of Coronavirus Disease 2019 (COVID-19), ICE epidemiologists have been tracking the outbreak, regularly updating infection prevention and control protocols, and issuing guidance to ICE Health Service Corps (IHSC) staff for the screening and management of potential exposure among detainees,” ICE said in a statement, quoted by The Atlanta Journal-Constitution.