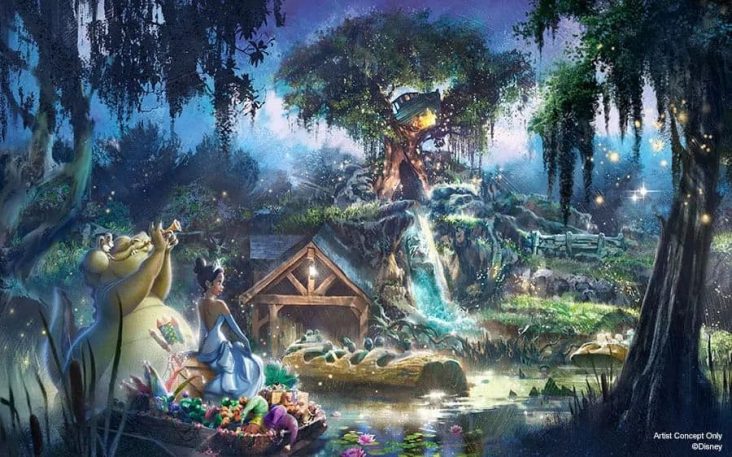 Setting a good example for children, Disney pays homage to Tiana in the Princess and the Frog.

Disney’s popular Splash Mountain ride is getting a culturally-sensitive makeover, the company announced on Thursday.

The re-themed ride will soon be seen in Disney’s Florida and California theme parks. The company explained that the logboat ride will no longer depict the animated sequence in the 1946 movie Song of the South, which they now acknowledge as an offensive film.

Song of the South won an Oscar for its theme song “Zip-a-Dee-Doo-Dah” but paints an unsavory image of people of color. The story follows the adventures of a young boy who visits his grandmother at a plantation after the Civil War. This was certainly a time of hardship, and detractors have long criticized Disney for their depiction of black people.

The Splash Mountain ride is a thrilling attraction that takes park guests on a wet and wild adventure while riding a log boat. The five-story drop drenches parkgoers and gets their adrenaline pumping.

According to Disneyland Resort Public Relations Director Michael Ramirez, their designers started work last year to re-theme the ride. It will now feature a bayou-inspired theme as an homage to Tiana, Disney’s first black princess who was introduced in the 2009 movie, The Princess and the Frog.

“With this longstanding history of updating attractions and adding new magic, the re-theming of Splash Mountain is of particular importance today,” Ramirez said. “The new concept is inclusive – one that all of our guests can connect with and be inspired by, and it speaks to the diversity of the millions of people who visit our parks each year.”

Disney has reportedly received countless requests to have the ride redesigned as the issue of racism continues to divide the nation.

Earlier, Disney Chair Bob Iger stopped the streaming of Song of the South on Disney + and ceased the sale and distribution of the animated film. He said that even with a disclaimer, the movie is no longer appropriate in today’s world.

“It’s just hard, given the depictions in some of those films, to bring them out today without in some form or another offending people, so we’ve decided not to do that,” Iger said.