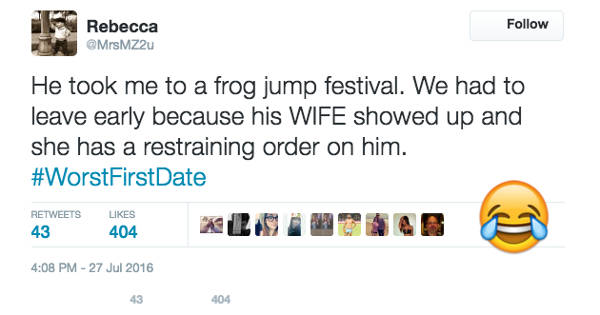 #WorstFirstDate I thought he was into fitness because he had on an ankle weight. He was actually on parole and it was an ankle monitor.

He still lived at home with his parents, so he had to sneak me in & that's when I found out about the Ninja Turtle sheets…#WorstFirstDate

He took me to a frog jump festival. We had to leave early because his WIFE showed up and she has a restraining order on him. #WorstFirstDate

I went to a fancy place. He ordered, & ate,the most expensive food on the menu.He went to wash his hands and never returned. #worstfirstdate

#WorstFirstDate he talked about himself all through dinner, then drove me around to show me where all his ex gfs lived. #truestory

Reluctantly went on a blind date through a mutual friend. Halfway through the date, we discovered that we are related. #WorstFirstDate

#WorstFirstDate going to a restaurant where his ex was a waitress and he burst into tears begging her to take him back is up there.

At the end of the night, he leaned in for a kiss, whispering "don't be scared if my tooth falls out." @FallonTonight #WORSTFIRSTDATE

I was trying to flirt with my date, so I told her she spilled some ice cream on her chin. Turns out it was a zit. #WorstFirstDate

Met a girl online & had her over for dinner. Heard ripping behind me while cooking. She was opening my mail. #WorstFirstDate @jimmyfallon

We were walking outside & it got chilly. He said:"I guess I should offer you my jacket." Then added: "But then I'd be cold." #WorstFirstDate

Guy took me to the $1 movie theater, paid for me, then said in total seriousness "You can pay me back later." @jimmyfallon #WorstFirstDate

I went out with a psychic who told me he once got beat up by a gang of ghosts. #WorstFirstDate

I thought it'd be cute to lady and the tramp some pasta. I got a whiff of pepper and sneezed pasta sauce all over him. #WorstFirstDate

#17. And this genuinely terrifying ordeal.