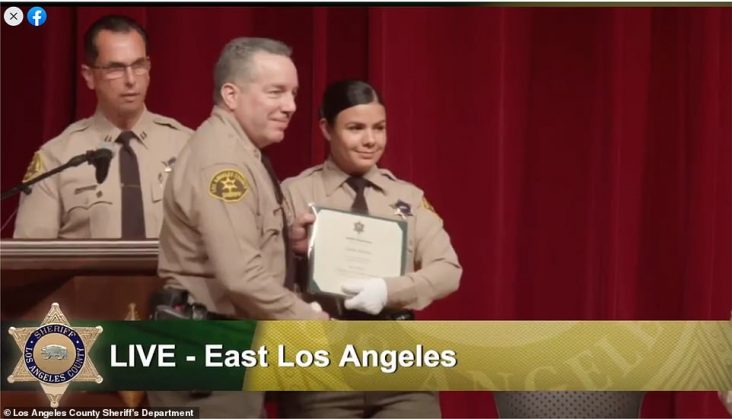 Claudia Apolinar, 31, tended to her partner's injuries despite suffering gunshot wounds herself.

The Los Angeles County Sheriff’s Department has identified and released a photo of one the two seriously injured deputies involved in the ambush attack on Saturday.

The deputy who tended to her partner’s wounds after sustaining several gunshots herself is 31-year-old Claudia Apolinar, a former librarian-turned-rookie cop and motehr to a six-year-old boy.

Apolinar’s presence of mind and selflessness is being recognized online, with some calling her a hero for saving her 24-year-old partner’s life.

The Los Angeles County Sheriff’s Department released a still photo of Apolinar Monday, showing her bleeding from a face wound.

FOX LA reporter Bill Melugin said  “LASD & the families of the two ambushed deputies have given me permission to show this graphic photo of the moment after they were shot. I’m told female deputy was shot through jaw, still radioed for help & applied tourniquet to male deputy’s wounds. Both stable now.”

Sheriff Alex Villanueva noted  in an interview, “She helped the other wounded deputy, got on the radio, provided medical care, got him to a place of safety ’cause they didn’t know if there was another attack coming their way.”

LASD Lt. Brandon Dean was quoted by the Daily Mail, “It’s an extreme situation. She was shot in the face, shot in the upper torso several times. To have the wherewithal to get yourself out of the vehicle and the line of fire in case it continues, but then to take care of your partner, initiate radio traffic make sure the civilians in the area are safe, it shows a lot about her courage and intestinal fortitude.”

On Tuesday morning, Apolinar’s family released more information about her.

“Claudia Apolinar, who is being guarded by fellow members of the sheriff’s department while she and her partner – a 24-year-old deputy – continue to recover, worked as an aide in a Los Angeles Country library starting in 2011. In 2017, she applied to be a sheriff’s deputy,” the report said.

Sheriff Villanueva also updated the public that Apolinar and her partner are still in the ICU but are stable for now.

The Sheriff also noted that public donations are pouring in so the reward money has grown to $200,000.