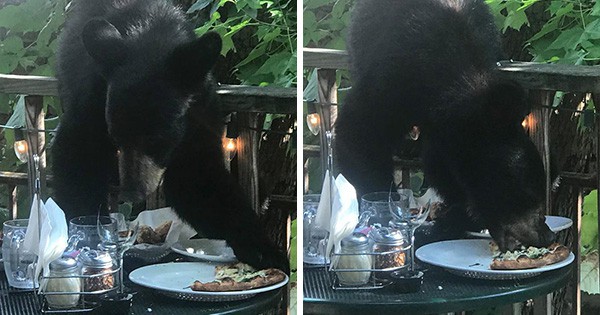 This bear has good taste!

A young bear cub who looked like he was craving for pizza paid this Tennessee restaurant a visit.

Carolyn Ball, a waitress at Howard’s Steakhouse, said that the black bear cub helped himself to a customer’s pizza after they left the table.

“Last week, we had a bear climb up a tree from the creek and onto the patio where some customers were eating. The bear surprised them. They obviously got up and left the food on the table. The bear stood on the table and ate a pizza,” Carolyn said.

It’s no surprise that the bear cub came wandering around as black bears are known to roam the area which is near the great Smoky Mountains National Park.

Carolyn posted the pictures on social media with a caption jokingly saying that the patio was “pet-friendly”.

But some Facebook users weren’t very happy about what they saw. They suggested to Carolyn that she should have tried to make the bear leave instead of taking pictures.

“If you have a bear that has already lost its fear of people so much that it is climbing on a crowded patio in the middle of the day, it is not going to reverse that behavior.”

“Bears escalate their behavior, so this was a bear that has worked its way up to doing this. It didn’t just decide one day to go to a restaurant.”

“The first thing [people] need to be doing is trying to make as much noise as possible to deter that bear from coming up any closer,” Gibbs said. “You need to make it a negative experience and try to scare the bear away.”

After the incident, the patio was closed for a couple of days until the bear could be trapped.