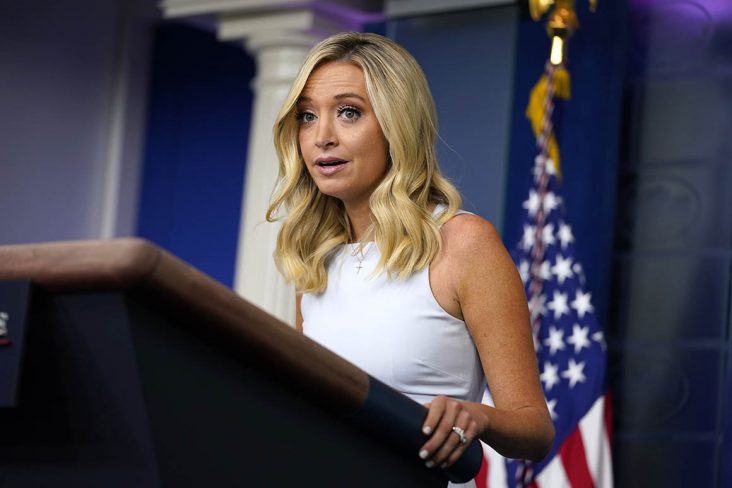 White House Press Secretary Kayleigh McEnany called out reporters during a briefing after being repeatedly interrupted as she answered questions about President Donald Trump’s record of condemning white supremacy.

More than one reporter sparred with McEnany during her press briefing on Thursday. Reports said one of them was Fox News White House correspondent John Roberts.

“I would like to ask you for a definitive and declarative statement without ambiguity or deflection, as the person who speaks for the president, does the president denounce white supremacists?” Roberts asked

“This was answered by the president himself,” she said. “He said sure three times. Yesterday he was point-blank asked, do you denounce white supremacy, and he said, I’ve always denounced any form of that. I can read for you, in August 2019, ‘In one voice our nation must condemn racism, bigotry, white supremacy.’ August ’17: ‘Racism is evil and violence in its name are criminal.’ I have an entire list of these quotes I can go through with you. He has condemned more than any president in modern history.”

Reports said Roberts then asked McEnany to go on record and make a declarative statement against white supremacy.

“I just did,” McEnany said. “The president has denounced it repeatedly. The president was asked this. You are contriving a story line and narrative.”

Another member of the White House press corp, on the other hand, repeatedly interrupted McEnany while she was explaining.

The Press Secretarty fired back, “We’re not having a debate on a cable news network right now. You need to let me finish.”

McEnany quipped, “It’s quite funny that the media goes haywire about interrupting in debates and then chooses to pursue that very same tactic themselves. This is a White House briefing. You ask a question, and you give me time to answer.”

During the briefing, the Press Secretary said President Trump has done “quite a bit” to combat the threat of white supremacy.

She said that Trump both wants to prosecute the Ku Klux Klan as domestic terrorists and said lynching should be a national hate crime.

The reporter challenged McEnany on her claims and explained Trump’s record on denouncing white supremacy has been “mixed.”

“His record is not mixed in the slightest and when you go back in history you can see that… Jesse Jackson has praised the president as someone who served underserved communities,” McEnany responded.

She continued, “This president with Mar-a-Lago, it was the first Palm Beach club open to African Americans and Jews.”