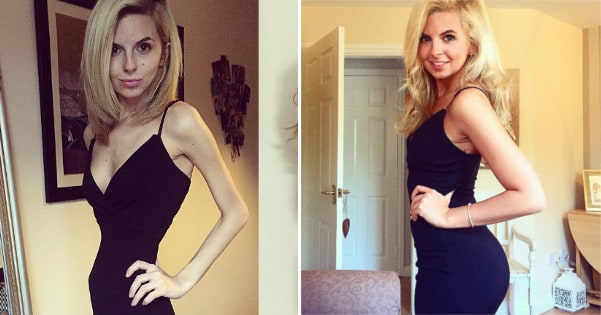 We often celebrate people who’ve lost weight and achieved the “ideal” body as told to us by the media and fashion models. But these women are bucking that trend and celebrating every pound they’ve put on in their astonishing weight gain journeys.

Hayley admits that she began to starve herself to achieve the ultra-slim look often seen in magazines and on celebrities. She launched an Instagram account to chart her recovery from an eating disorder and, with the support of her followers, beat her demons. She now spends her time campaigning for body positivity.

Transformation Wednesday? 😂😂 okay so shooting with Tommy just over a year and go and shooting with Him last week … Both images show dedication but left is an unhealthy dedication, over obsessing over weight and food and on the right is healthy, enjoying exercises and a girl who also loves her grub and has a lot of it… You can achieve whatever goal you have , weight loss, weight gain, muscle gain, to enter a competition… Anything !!!!! If you want help achieving your fitness goal email me for prices on personal training and diet plans ✌🏼️💪🏽 @tommygggphotos and yes I have quite clearly had my boobs done before [email protected] on my boy boobs

A post shared by Courtney Black-PersonalTrainer (@courtneydblack) on Sep 21, 2016 at 9:41am PDT

Courtney weight just 99lbs a few years ago when she worked as a fitness model, convinced that only an extremely lean figure would show off her muscles. Surviving on just 800 calories a day, she ended up in hospital. Now, Courtney eats 2,000 calories a day and is a successful fitness instructor.

Do you wanna know the truth about gaining weight? Because I've done a whole lot of it. I used to believe that my life would end over a couple of extra pounds on the scale. I used to believe that losing weight was the most important thing in the world. I used to believe that there was no such thing as going too far, getting too thin, losing too much. Then I nearly lost my life. There were only two options left: gain weight, or die. So I gained weight. More and more. Anorexia morphed into binge eating disorder and within a year I'd gone from 65lbs lying on my death bed to 180lbs, right back to self loathing and wanting to lose weight more than anything in the world. I lost and gained hundreds of pounds over the years. I'd clawed my way back from the edge and still I believed that happiness could be found in the dropping numbers on a bathroom scale. Until I realised that no weight loss had ever made me happy. No amount of disappeared pounds had made me stop hating my body. And chasing thinness had made me lose much more than weight – I'd lost myself. Now I know that no matter how much extra jiggle might come along, nothing important about me will have changed. I'll still have the same heart, the same mind, the same passion, the same love. The scale will never be able to tell me anything about myself that truly matters. It doesn't have the power to define me – only I do. And I refuse to keep chasing that empty promise of happiness granted through restriction and self hatred. I'll take my happiness right now. We are all so worthy of it, exactly as we are. Don't be afraid of gaining weight, my love. There's a whole life for you to gain when you stop letting those numbers dictate your worth. 💜💙💚🌈🌞

At age 13, Megan weighed just 62lbs and realized her teenage body hangups had gone too far. Today, Megan has learned to love her figure and has devoted her Instagram account to promoting body positivity.

2014 -> 2016 💜 It's nice to look back sometimes, to remember the seeds that started this garden, and all the colours that give you warmth. I remember being told once by a doctor in a treatment centre that there was no such thing as a full recovery. He said that I would just have to learn to "live with it" In translation, he suggested I had to compromise with life and death. I had to accept the presence of disorder, dismantle my growth at the hand of mediocrity. There was a line drawn in my focus, and extending beyond this mark was a life I always wanted. But like a craving to food, these dreams were suppressed the limits I learned. It took 3 more years after leaving that hospital to discover that compromise would never work. The odds would shift in one hand or the other, and in 2014, mediocrity nearly left me out of the picture. My heart and various major organs were beginning to fail. I was 68 pounds. The disorder was winning, and in turn, I was dying. A break through moment happened one evening after returning from the hospital. I remembered a moment of my childhood, when I was about 4 years old. I had long hair and refused to wear anything but gowns and tiaras. I ate birthday cake for breakfast, and Halloween Candy was my favourite 'season' of all. When a song came on the radio, I would sing over the lyrics as if the music was made for me and my musing. I would smile at my own reflection, counting the dimples on my face as prerequisite kindergarden work. And I had big cheeks too! Nice full rosy cheeks that were pinch-able and perfect. So perfect, that I wished for nothing more. So perfect, that I refuse to wish her away. Life cannot compromise with death, the same way strength cannot compromise with defeat. I have learned this through both pain and practice. Fighting is not easy when the fight is for a cause; I know no greater reason than to fight for love. For in love, I grow. #TransformationTuesday #VeniVidiVici #FightForGrowth

The difference between these two images of Sarah is 2 years — and 44lbs. At 18, Sarah suffered from depression and developed anorexia, saying: “I lived for too long apologizing for the extra calories that I needed.” Now, Sarah is a professional bodybuilder and loves her healthy, strong body.

Dancer Margherita began starving herself after being rejected from several important casting sessions. Her weight plummeted to 55lbs, but now Margherita understands that it’s your health, not your waist size, that matters.

My transformation Tuesday is in honour of the National Eating Disorders Awareness Week (NEDA). Eating Disorders affect more people than we know. But recovery IS possible . Seek help, seek support and seek life. You deserve recovery, grasp it. The biggest change is not just in my strength or in my size. The biggest change is the now ever more present smile on my face because I battled anorexia and I won. 💪🏻 #NEDA #Neda2016 #NEDAwarenessweek #smallbutstrong #strongnotskinny #strength #recovery #anorexiarecovery #beatit #transformation #transformationtuesday #girlgains #musclegain #girlswholift #girlswhosquat #girlswithmuscle #youtube #youtuber #fitspo #motivation #bodybuilder #bikiniathlete #bikinicompetitor #strengthinnumbers

Succesful fitness blogger and personal trainer Aroosha is always in high demand, but she recently apologized to her body on Instagram “for treating you badly”. Aroosha starved herself until she was close to death, before rediscovering her love of her body.

A lot of people have asking me how I did it. How I recovered so fast… the truth is, I didn't. An eating disorder is deceptive and horrible. It lures you in and makes you believe that you'd be nothing without it, you wouldn't survive without it. I used to believe my ed was my best friend but all it ever wanted to do was kill me. In the picture on the left I was 13 and had already been struggling for a long time. 💜 There are 8 years between these photos and in that time I have weight restored and relapsed countless times. I have tormented myself mentally and physically. I told myself I was horrible and unworthy of happiness. I have hated my body. I have starved it, I have hurt it, I have left unmeasurable damage. THIS IS NOT MY LIFE ANYMORE!! After 10 years I finally decided I loved my family and friends more than my illness. I decided that I wasn't to blame for everything that had happened. I decided that I deserved to be happy!!! So I finally let go… 💜 If your still struggling I am with you every step of the way. If you've been going through this for lifetimes and feel useless when you see others getting better, I completely understand. If you feel like your Ed is still taking care of you, I understand but I promise there are better things out there!!! If your not taken seriously because you don't fit into the typical anorexia box, your struggles are worthy and you deserve to be helped!!! If your turned away because of you weight, skin colour or gender, FIGHT LIKE HELL!! You deserve to be heard!!! 💜 I'm not telling you this for sympathy or to diminish anyone's struggles!! Everyone's struggles are valid!! But I want you to know that it is possible!! Yes I still have bad days. I still struggle but I'm stronger now and know that I deserve to be happy! Keep going, it's going to be the hardest thing you ever do but it's so worth it! Fight like hell and I'll be fighting with you!! #positivebeatsperfect

Connie suffered from anorexia from a young age, always falling back into bad habits when she managed to put on a little weight. Finally, she set up an Instagram account dedicated to motivating herself and others to maintain a healthy weight and learning to love the skin you’re in.

I watched for so long as she was drowning, doing nothing. She flailed and sunk and I just stood there. I was sure someone else would save her, someone more qualified. This little girl was dying. She made herself the victim, she was the cause of her pain and no one could stop her. It got out of her control, and every day she was screaming silently to be rescued from the wreck her existence had become. I was angry that no one would step in and do what had to be done. Someone. SAVE HER. But it's not that they didn't want to, it was that they couldn't. Though they tried, no one could get through. So I made up my mind. It had to be me. I would become the hero that girl needs. I would become strong enough to hold her, to heal her, to make sure she KNOWS I love her. I was her only hope, if I didn't do it, that girl would be gone. I found out what she felt and what she needed to let go of, and then I pulled it from her grip. I was the shoulder she leaned on, I was her sanity when the world didn't get it. Ask yourself what kind of hero you need, and then become her. #beyourownhero

Erika battled anorexia and bulimia from the age of 16, believing she was too fat to eat. She tried to hide her frail figure under oversize clothes but now, since learning to cope with her illness, Erika has rediscovered her love of sport, got married, and is proud of her body.