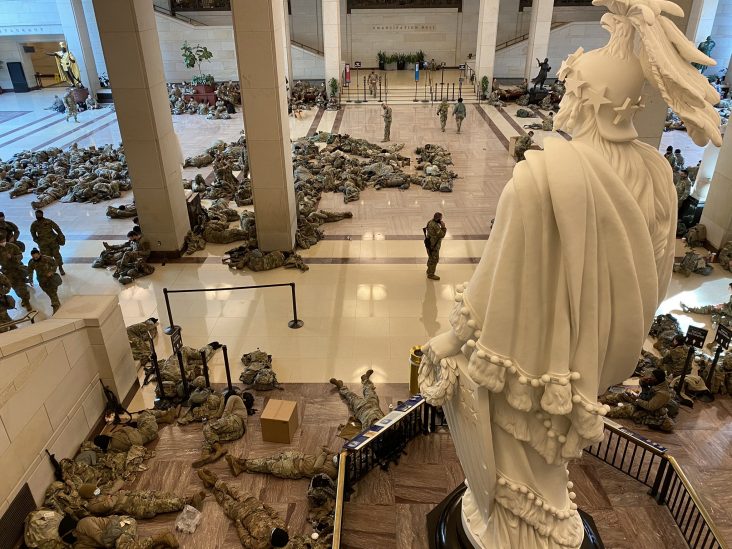 The halls of the U.S. Capitol is filled with extra security today as the U.S. House of Representatives considers whether to impeach President Donald Trump for a second time.

Up to 15,000 Guard members are expected to be on duty in the coming days in Washington D.C. to support law enforcement in connection with the Jan. 20 inauguration of President-elect Joe Biden.

Photos posted on social media showed the National Guard members sleeping in the halls of the Capitol during the early morning hours Wednesday.

The District of Columbia National Guard says it has been authorized to arm troops assigned to the U.S. Capitol grounds. The authority was requested by federal authorities and approved by Army Secretary Ryan McCarthy as of approximately 6 p.m. Tuesday.

The deployment of more troops comes amid mounting concern about threats of violence in the days leading to Biden’s inauguration..

Michael Plati, U.S. Secret Service special agent in charge of inauguration security said the January 20 event is designated as a “national special security event,” which clears the way for communication, funding and preparation between multiple agencies in Washington, like the Capitol Police, Pentagon, Homeland Security and District-area police.

Other national special security event-like events are the State of the Union, the Super Bowl and the Democratic and Republican National Conventions.

Biden said he is confident about his own security at the inauguration.

“I’m not afraid of taking the oath outside,” he told reporters Monday. “It is critically important that there’ll be a real serious focus on holding those folks who engaged in sedition and threatening the lives, defacing public property, caused great damage — that they be held accountable.”