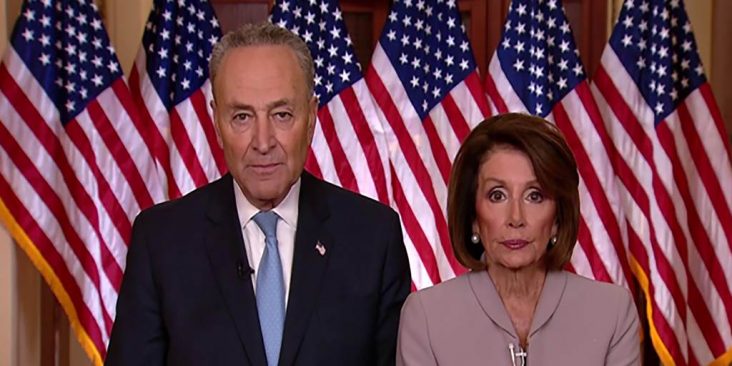 Democratic congressional leaders Nancy Pelosi and Chuck Schumer reiterated the call for President Trump to be removed from office after the violence at the Capitol on Wednesday..

The top Senate Democrat Chuck Schumer said the 25th Amendment will keep Trump from causing any more trouble. He called on Vice President Mike Pence and the Cabinet to do their part — if not, he said, Congress will.

In a statement, Schumer said, “What happened at the U.S. Capitol yesterday was an insurrection against the United States, incited by the president. This president should not hold office one day longer.”

“The quickest and most effective way – it can be done today – to remove this president from office would be for the Vice President to immediately invoke the 25th amendment. If the Vice President and the Cabinet refuse to stand up, Congress should reconvene to impeach the president.”

House Speaker Nancy Pelosi, whose office was one of those vandalized during the breach, echoed Schumer’s sentiments.

In a press conference, she said, “The president has committed an unspeakable assault on our nation and our people. I join the Senate Democratic leader in calling on the vice president to remove this president by immediately invoking the 25th Amendment.”

“If the vice president and cabinet do not act, the Congress may be prepared to move forward with impeachment,” she added.

Under the 25th Amendment, Vice President Pence and a majority of Trump’s Cabinet can remove Trump.

The president could contest the move, and the Congress would need to vote with a two-thirds majority to push him out of office.

NBC News reported that there have been informal staff discussions about invoking the 25th Amendment at the White House.

More than 100 lawmakers have called for the president’s removal through the 25th Amendment, impeachment, or resignation.

In a separate press conference, Senator Lindsay Graham was of the opinion that the president’s actions were “the problem, not the solution.”

He adds that he didn’t believe invoking the 25th Amendment was “appropriate at this point.”

Graham also said he was looking for a peaceful transition to the Biden administration and was hoping for the next 14 days to serve as a “reset.”