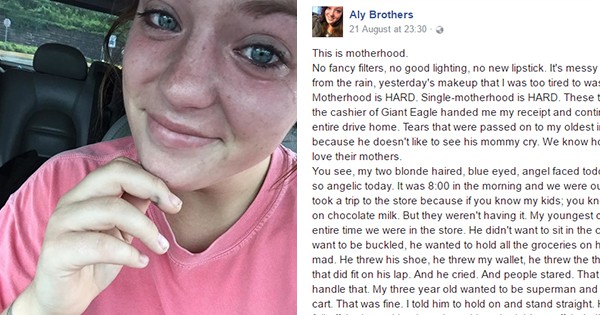 Like any kids their age, the two can be quite a handful sometimes. The 22-year-old mom from West Virginia said that her toddlers were “very cute, they have more good days than bad. But the bad days, man, they take a toll.”

One such bad day happened one morning, when Brothers took her kids on an 8am milk run. But Bentley and Levi weren’t having any of it. “We got to the store and they really just didn’t want to be there,” said Brothers.

Levi didn’t want to be strapped to the cart and started throwing his shoes, her wallet, and groceries on the floor. Bentley opened up the grocery fridge doors and started knocking things around. The two fought over ownership of a large Mickey Mouse balloon that they promised to “share” all but five seconds ago. This situation was not new to Brothers, who kept her cool throughout the entire ordeal. As any parent knows, kids will be kids, and these are just things that kids do.

But it wasn’t her sons misbehaving that did her in — it was the judgment from the people in the store. 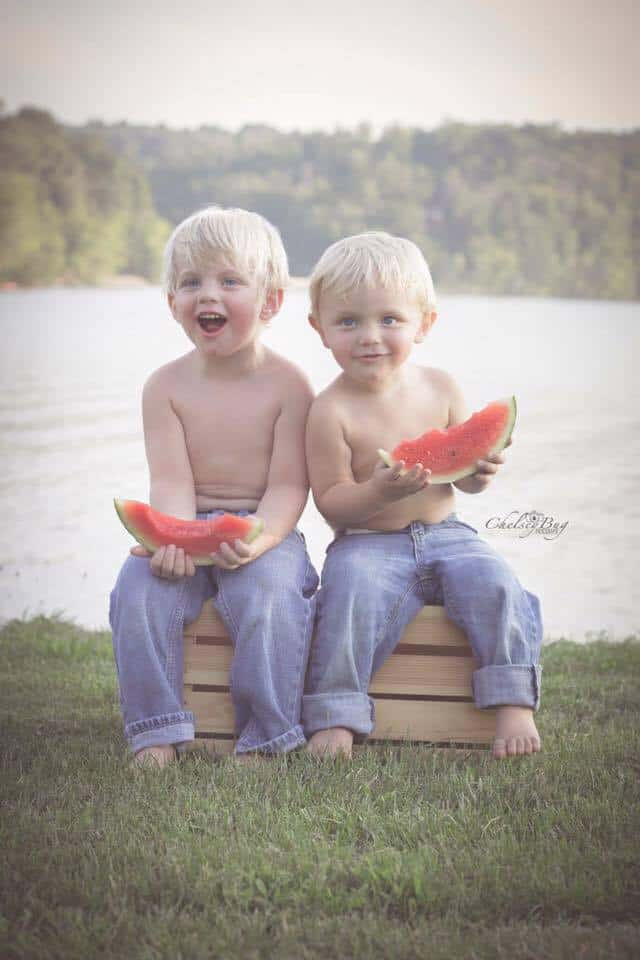 As she stood at the checkout counter, people in line behind her started glaring at her. When Brothers heard an older gentleman whisper, “she’s pretty young for two kids,” she could no longer hold back the tears.

“I just sat in my car and put my hands on the steering wheel and just cried,” she said.

Bentley wanted to know why she was sad, and she told him that when they were misbehaving at the store earlier, the other people there weren’t being very nice about it.

“Then he started crying and said ‘Mommy I want you to be happy,’” said Brothers. “I thought I’d take a photo of this moment to look back on when I have a worse day or a better day. Just to remember.”

Brothers shared the photo to Facebook accompanied with a powerful message: “This is motherhood. No fancy filters, no good lighting, no new lipstick. It’s messy hair that’s wet from the rain, yesterday’s makeup that I was too tired to wash off, and tears,” she wrote. The entire text reads:

This is motherhood.
No fancy filters, no good lighting, no new lipstick. It’s messy hair that’s wet from the rain, yesterday’s makeup that I was too tired to wash off, and tears. Motherhood is HARD. Single-motherhood is HARD. These tears started as the cashier of Giant Eagle handed me my receipt and continued for the entire drive home. Tears that were passed on to my oldest in the backseat because he doesn’t like to see his mommy cry. We know how much boys love their mothers.
You see, my two blonde haired, blue eyed, angel faced toddlers were not so angelic today. It was 8:00 in the morning and we were out of milk. We took a trip to the store because if you know my kids; you know they survive on chocolate milk. But they weren’t having it. My youngest cried almost the entire time we were in the store. He didn’t want to sit in the cart, he didn’t want to be buckled, he wanted to hold all the groceries on his lap. He got mad. He threw his shoe, he threw my wallet, he threw the three groceries that did fit on his lap. And he cried. And people stared. That was fine, I could handle that. My three year old wanted to be superman and stand on the cart. That was fine. I told him to hold on and stand straight. He did not. He fell off, he leaned backwards and knocked things off their displays. He leaned back and bumped a stranger. Then I made him get down and he walked too far ahead of me and opened all the freezer section doors telling me all the things he wanted to get. I tried to handle that. I stopped multiple times and composed myself and my children. The lady that I stopped and moved to the side of the aisle for glared at me because I moved the wrong way, she needed behind me not in front of me. No words, just a glare. I tried to handle that. And then we saw balloons. Oh how my kids love balloons. They wanted the huge ones that cost $8.00. I compromised. We would get one balloon and share. They agreed. They each said “share” and smiled as I picked the biggest Mickey Mouse balloon they had. But while we were checking out they did not want to share. They screamed, they cried, they fought. I handed the balloon to another cashier to be put back and they cried louder. My youngest pushed buttons on the card machine while my oldest picked up candy. The people in line behind me glared. The cashier glared. Everyone’s eyes were on me as if to say “can’t you control your own children”. One older gentleman whispered, “she’s pretty young for two kids” and I lost it. She handed me my receipt and I cried. They don’t know me. They don’t know me as a mother. They don’t know my children. They don’t know I was married before I started a family. They don’t know I left that marriage because of abuse knowing I would have it just as hard as a single mother. It’s hard people. The glares and whispers and judgments are hard. Sometimes I can control my children and sometimes I can’t. Sometimes they listen and sometimes they don’t. Sometimes I can handle it and sometimes I break down. I know these days will pass, the tears will stop, the fighting will cease, and my babies will be grown. And that will be hard too. So if you see a parent struggling, if you see a kid throwing a tantrum, if you see a mom on the verge of tears…please say something nice. Please don’t glare with judgement. And to all moms out there having a day like mine…I see you, I know you, I love you. You are strong and you are doing just fine.

Brothers said that after posting, people from all over the world began sending her messages of support.

“One mom wrote, ‘I am in the bathroom at work crying having a day like yours,’” Brothers said. “I think parents get judged for every move they make, regardless. Every single parent has been in that situation, it’s just the nature of having children.”

She added: “You can’t control them, you can’t make them feel or think a certain way. So if you’re constantly trying to make other people believe you have a perfect life and perfect children, you’ll never truly be happy.”