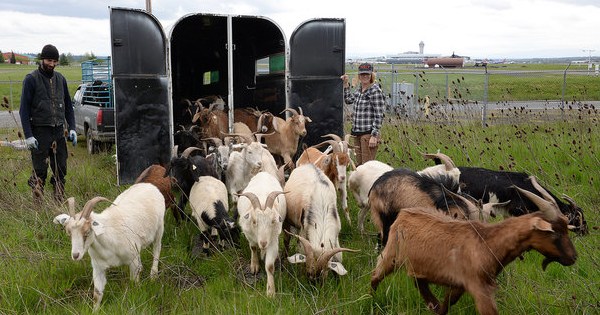 What else would you expect from a city as astute and savvy as Portland? This week, Portland Airport’s HR department set a refreshing new precedent. They opened up their applicant pool to include four-legged candidates such as goats. Yes, goats. All hungry for advancement.

Local news station KWG reports that the airport has hired a fleet of 40 goats to munch their way through unwanted blackbery plants, thistles, and shrubs near the airfield. The Port of Portland, which owns the airport, originally campaigned for the sustainablity effort and says it alleviates the need for spraying herbicides or removing the weeds by hand.

Personnel also include one lone llama whose job it is to fend off predators like coyotes.

The goats and the llama have reportedly inked a three-week contract until all of the unwanted plants are gone. A win-win for all.