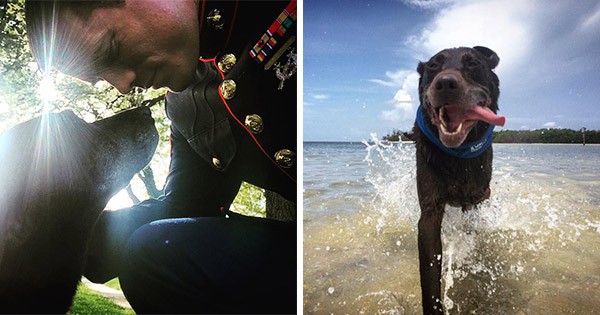 Robert Kugler is a former Marine from Broken Bow, Nebraska who, with his dog Bella, has been on the road for a few weeks now —  their second road trip together.

In May 2015, Bella was diagnosed with osteo-sarcoma.

Goodnight everyone. May you Love and be Loved by someone dear to your heart as you fall asleep tonight. If all you have is a memory, cherish it and let it warm you like a soft blanket. I was so busy trying to sort photos tonight and plan the next stop, I nearly forgot to take the time to Love on my girl. After all…that's the entire point of this trip. #Love #goodnight #together #oneness #wholeness #pause #reflect #inthemoment #themoment #thelittlethings #tripawd #labrador #labsofinstagram

The vet told Robert that Bella was in a lot of pain, that they would either have to amputate her front left leg or have her put to sleep. Getting Bella’s leg amputated could only do so much, as the cancer had already spread to her lungs. Rob was told that his best girl only had about three to six months to live.

No matter how fiercely independent we are, every so often we get ourselves in a spot where we can use a little help. Learning to accept that help, and not let it effect the ego, is a part of the process we call growth. #quotes #roaringbrook #adirondacks #bella #help #inspire #oneness #wholeness #mansbestfriend #lendahand #reachout #together #teamwork #tripawd #labrador #hiking #mountains #waterfall

Rob wrote on his blog that their first trip was meant to be a ‘farewell trip.’

“We traveled for five months, and covered thousands of miles with many havens on couches and guest beds of the friends I’ve been fortunate enough to make it across the country in my short lifetime. It was an incredible and unforgettable experience,” he said.

When they returned home to Nebraska, Bella was still in good shape. After three months, Robert decided he didn’t want to waste any more time and they hit the road again.

“I just didn’t want her to be gone one day when I came home,” he said.

She has my heart. #bellagirl #labrador #tripawd #putinbay Thank you @canonusa for making affordable DSLR cameras such as my T2i that I've used for the past 5 years to capture so many wonderful memories.

Robert had already lost two siblings — a brother in 2007 and a sister in 2014. “When you see lives end shortly before people get to do many of the things they dream of doing, it changes your perspective on life,” he said.

Robert adopted Bella as a puppy nine years ago, so he wasn’t just about to let her go without giving her a few good memories.

“We take on these animals, which means we’re gonna take on their life and their passing,” Rob said. “To be there with them when they pass is the greatest gift you can give anybody.”

Robert says we should all be like Bella: Wag more, bark less.