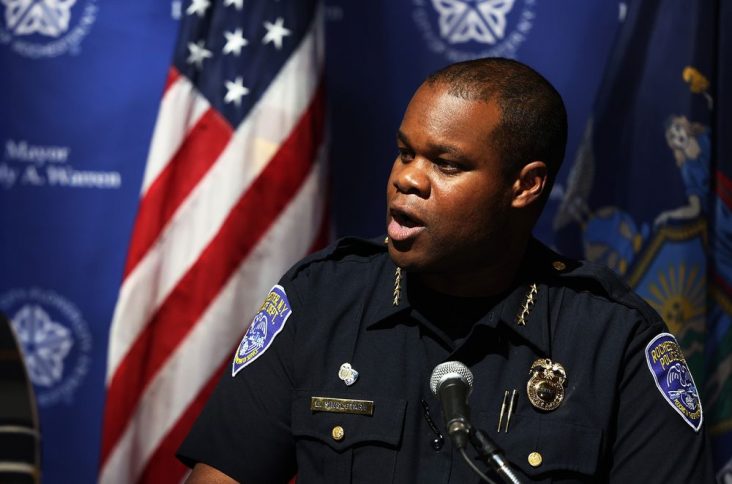 The mayor of Rochester, New York, on Monday fired the city’s chief of police ahead of his retirement this month over a preliminary review into the death of Daniel Prude in March.

In a news conference, Mayor Lovely Warren relieved Police Chief La’Ron Singletary just one week shy of the retirement date he set. Warren also suspended the city attorney and her own communications director, for 30 days without pay.

The mayor said she has ordered an internal review into Daniel Prude’s death. Prude was a Black man with mental health issues who died after having been put in a “spit hood” and restrained by officers in March this year.

Warren said, “This initial look has shown that we have a pervasive problem in the Rochester Police Department. One that views everything through the eyes of the badge, not the citizens we serve. It shows that Mr. Prude’s death was not taken as seriously as it should have been by those who reviewed the case throughout city government and at every level.”

The mayor explained that she had asked the U.S. attorney’s office to investigate whether Prude’s civil rights were violated. Her office was looking into engaging an outside agency to investigate the conduct and training of the police department.

“This tragic loss of life has shown that we have systematic failures.We have to acknowledge these failures and put in the reforms that not only create the transparency our public deserves but also allows our city to adequately serve our people,” Warren added.

The deputy mayor’s review summary of the Prude case alleged a “culture of insularity, acceptance and, quite frankly, callousness that permeates the Rochester Police Department.”

Earlier this month, relatives of Prude released police videos of the March 23 encounter between the 41-year-old Daniel and police officers. They claimed that the police used excessive force.

According to the family, Daniel had mental health and drug problems. Joe Prude called 911 that day, and Daniel Prude was hospitalized for about three hours for a mental health check.

The video footage from the body cam show that police found Prude naked in the middle of a street shortly after 3 a.m. on March 23. Prude complied when the police asked hi, to get on the ground face down and put his hands behind his back.

Police said the officers placed a spit hood on Prude because he said he had Covid-19.