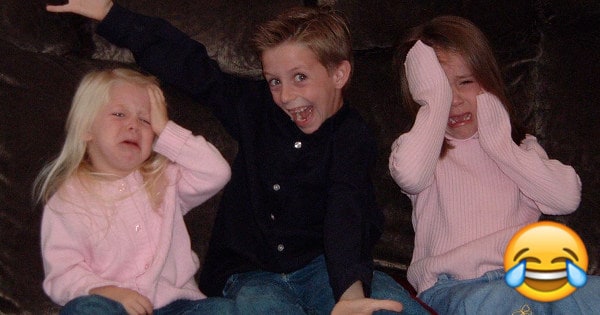 #1. On why you decided to have more than one child.

"Please go play with your brother. That's basically the reason we had him."

#2. On dastardly plans from tiny minds.

"When the baby comes out, I'm gonna call him 'Toilet.'"

– My 5yo, naming his little brother

#3. On the places kids choose to pick their battles.

Nothing ignites sibling rivalry quite like buttons on an elevator.

I know 3 will be a great husband one day because when his baby sister cries or yells, he literally gives her whatever she wants.

#5.  …or just master the art of delegating tasks.

I gave my 5yr old his first official chore and allowance yesterday and already this morning he taught his 2yr old sister to do the chore.

#6. On how the older ones take charge.

The 9yo just said to her little brothers, "Why don't we just stop talking?" and now I know she'll be a great mother someday.

#7. On giving up altogether.

My parenting style can best be described as "Go help your sister."

#8. On the fun phrases all moms find themselves repeating.

My Parenting Memoir: "Apologize to Your Sister."

#9. On learning from your kids.

Son: Can you teach me about fractions? Me: Sure. I love 2/3 of my children.

"Stop hitting me!"
– kid who is hitting their sibling

#12. On how different siblings can be.

I'm constantly amazed at how different my twin daughters are. Lisa is so much more positive & confident than her sister Hog Face.

#13. On defence lawyers in training.

Me: "Why is your sister crying?"

#14. On having to throw more than one birthday party a year.

It's kid 3's first bday, and her party theme is, "Everything here is remnants I kept from the other kids' elaborate celebrations. So sorry."

#15. On how kids really feel about their siblings.

#16. And how always having tiny troublemakers in tow is basically a PSA.

I bring my kids to a romantic restaurant on Valentine's day as a birth control reminder to the other couples.