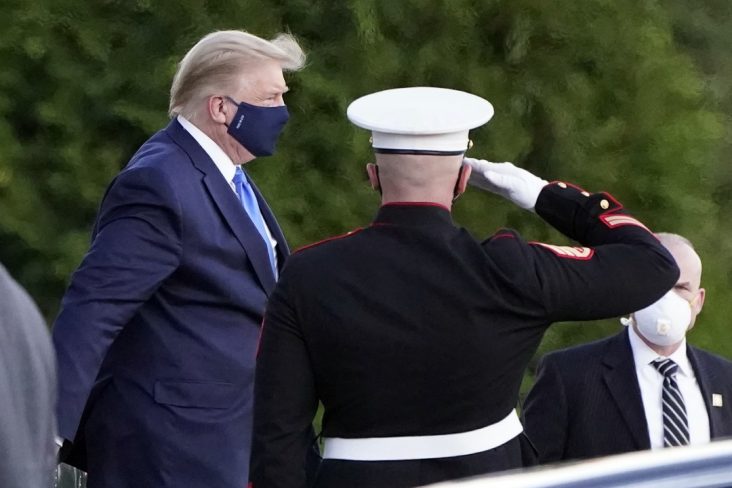 The move was a precautionary measure recommended by the president’s physician, the White House said, and he is expected to remain there for several days.

President Donald Trump has been transferred to the Walter Reed National Military Medical Center Friday on board his helicopter and will remain there for several days, the White House said.

Trump, who was confirmed positive for COVID-19 on Friday, was moved to the hospital as a precautinary measure and will be staying there for a few days.

President Trump will work from the offices there, she said.

President Trump left the White House shortly after 6:15 p.m. ET and arrived at the hospital in Bethesda, Maryland, minutes later after the short helicopter flight on Marine One.

Marine One landed on the White House South Lawn shortly before 5:30 p.m. ET. A small group of senior White House staff gathered outside for the departure.

President Trump wore a suit and a face mask and walked to the helicopter. Trump waved to reporters before boarding.

Moments later, he was seen disembarking from the helicopter on the Walter Reed grounds. He was accompanied by chief of staff Mark Meadows.

In an 18-second taped video posted to Twitter moments after he touched down near the hospital, Trump said, “I think I’m doing very well, but we’re going to make sure that things work out.”

People familiar with President Trump’s condition said Trump has a low-grade fever. The president’s doctor said he was administered an antibody cocktail, along with vitamins, and is fatigued.

First Lady Melania Trump has a mild cough and headache.

The experimental drug provided to the president is a combination of two so-called monoclonal antibodies and is meant to provide the body’s immune system with a temporary, but immediate, boost to fight off the coronavirus.

Regeneron, which makes the drug, confirmed to NBC News that it provided the medication to the president under what is called “compassionate use,” through which Food and Drug Administration allows access to experimental drugs outside of clinical trials for patients with a life-threatening condition or serious disease.

Earlier, administration officials said Trump was experiencing “mild symptoms” after he tested positive for the disease.

He ceded the only event on his official public schedule to Vice President Mike Pence.

President Trump is 74 and clinically overweight. Medical experts say he has higher risk of complications from the virus, due to his age and weight.

The Centers for Disease Control and Prevention (CDC) say the risk of a severe illness increases with age and other factors, and other medical conditions can also increase risk.

President Trump weighs about 240 pounds and is about 6 feet, 3 inches tall. His physician has said he is overall healthy.

Vice President Pence tested negative for the disease on Friday and  remained at the vice presidential residence at the Naval Observatory.

“The president is in charge,” she said.