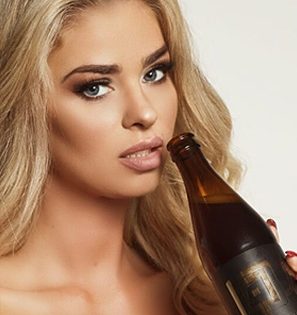 A Polish company is bottling the “essence” of a woman and it just hit the shelves this week.

“The Order of Yoni” brewery has just released a line of beer made from the “vaginal lactic acid of hot underwear models”.

Each bottle costs roughly $7 dollars and has a peel-off sticker that shows the model whose “essence” is in the brew.

To make the beer, a gynecologist had to take smears from two hot models, Paulina and Monika, and had their bacteria cultured in a lab.

The process was described on their website, saying: “The secret of the beer lies in her vagina. Using hi-tech microbiological techniques, we isolate, examine and prepare lactic acid bacteria from the vagina of a unique woman.”

Customers can now buy the beer and “taste” Monika and Paulina in selected bars and pubs after its introduction to the public on July 28.

One of the beers first consumers, Gregorz Majewski, said that he wasn’t impressed. He said, “People will try it out of curiosity, but I don’t think it will be a regular addition on the table for beer lovers.”

He also mentioned that the beer was pricey as it costs the same as a normal bottle of wine.

The public did show concern over the hygiene of this type of beer. But the Order of Yoni was quick to reassure them that the girls were checked and the scientific process makes it completely safe and consumable.

Though the company had a few minor setbacks with funding in the last two years, they found an investor who believed in the project.