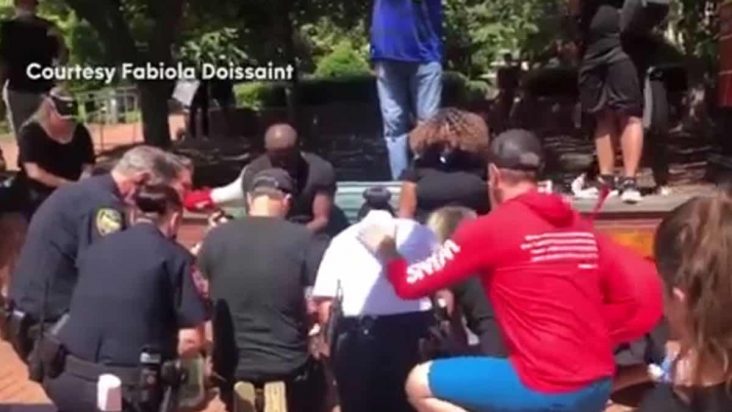 A group of white police officers and other members of the local community in Cary, North Carolina came together to wash their black brother’s and sister’s feet, while asking for forgiveness.

The moments were capture in this moving video which shows white folks cleaning the feet of black religious leaders, while a man makes a prayer into a megaphone to repent for their sins and historical involvement in slavery and oppression against African-Americans.

A man holding a megaphone led the prayer, and he acknowledges there’s one race of people … going on to ask for forgiveness for their white ancestors enslaving, mistreating and oppressing African-Americans.

However, not everyone was impressed, with many Twitter users left dumbfounded by the whole thing.

Meanwhile had Barbeque last night with my black neighbors, half my neighborhood is black, not a single person, asking me to kneel, or anything crazy. White liberals hate themselves and have so much guilt!

What the hell is actually happening? It's like watching some kind of mass psychosis/hysteria/brainwashing event world wide. I'm utterly baffled.

Taken too far across the line of self respecting oneself and no dignity enough to stand as men/women as God intended and build a better future together, as ALL LIFE MATTERS, instead of sniveling, groveling, cowering and washing feet out of their misplaced ideology of submission