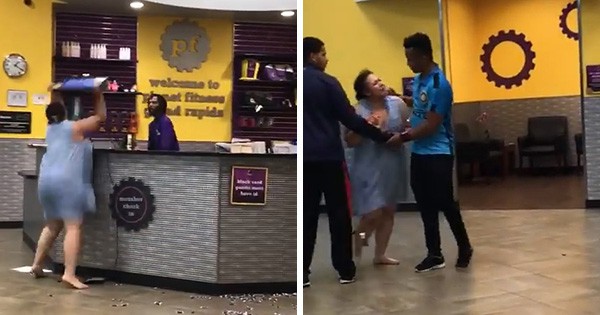 A woman was arrested in Grand Rapids, Michigan for tearing up the front desk at a Grand Rapids fitness center.

The incident happened on June 12 at around 1:30 in the morning at Planet Fitness.

The whole scene was caught on video as the 20-year-old was seemingly agitated by one of the employees.

As the video continues, the woman is seen throwing computers, damaging a phone, and attempting to hit an employee.

After calling the authorities, the employee moves out from behind the desk and the woman violently tries to punch him several times. Bystanders try to restrain the woman and the Planet Fitness employee tries his best to evade her punches.

Grand Rapids police say that after being arrested she was charged with Malicious Destruction of Property and will be fined $200-$1000.

The front-desk employee decided not to press charges against the woman for assault. But the gym , however, pressed charges for the property that the woman destroyed.