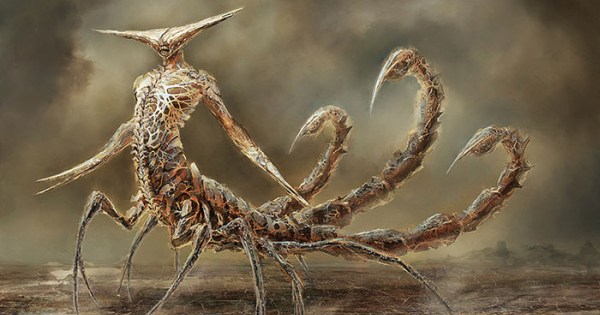 Are you ready to revisit your worst nightmares? US-based artist Damon Hellandbrand makes that possible in a series of illustrations that evoke a strong visceral experience. But these creatures aren’t mere figments of the artist’s imagination: they are the twelve zodiac signs, reborn from the underbelly of Hades.

Hellandbrand’s creative process involved fleshing out his work using pencil, watercolor, acrylics, or charcoal. Ultimately, his mood dictates which tool to pick up.

“I created the series as a way to test my concept skills with a subject that was familiar to everyone. I’m a big fan of anatomy, so I wanted to reintroduce the signs as mutant animal/human hybrids,” he said. “I have a fondness for anything fantasy related or anything that doesn’t exist in reality, and mythology certainly has that in spades…”

“I didn’t really delve so much into the characteristics or qualities of the signs, just really focused on the persona. I basically took what I knew the signs represented in terms of their name (i.e. Cancer = Crab, Leo = Lion, Pisces = Fish etc). and proceeded to illustrate them as human/animal hybrids.”

“I didn’t do as much research on these symbols as I should have,” Hellandbrand muses, “and I’ve gotten a lot of responses as such, so needless to say I’ll be making a few new pieces to redeem myself.”

Hellbrand’s process involved “doing a black and white pencil drawing on paper and then scanning the illustration into a drawing/painting program called Corel Painter to color and paint.”

We’ll just be over here, waiting with bated breath to once again have the crap scared out of us.

If you’re brave enough, step into his haunting world of dark astrology: