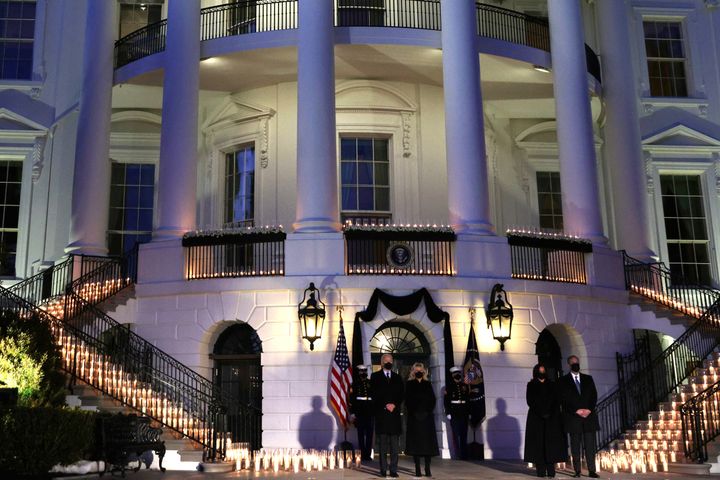 President Joe Biden, first lady Jill Biden, Vice President Kamala Harris and Harris’s husband, Doug Emhoff, participate in a moment of silence at sundown Monday on the South Portico of the White House during a candlelight ceremony to mark the more than 500,000 lives lost in the U.S. to COVID-19.

President Joe Biden on Monday honored the 500,000 Americans who perished from COVID-19 as he offered words of solace and hope.

Addressing the nation from the White House, Biden said, “Today we mark a truly grim, heartbreaking milestone: 500,071 dead. That’s more Americans who have died in one year in this pandemic than in World War I, World War II and the Vietnam War combined. That’s more lives lost to this virus than any other nation on Earth.”

Johns Hopkins University data noted that the U.S. still hit the grim milestone even as infection rates and fatalities begin to decline. The last 100,000 deaths occurred in just over a month, quite possibly an effect of the Christmas holidays.

The president said even amid the hope of the new vaccine, Americans must “remember each person and the life they lived,” and “resist viewing each life as a statistic or a blur.”

Biden noted, “We often hear people described as ordinary Americans. There’s nothing ordinary about them. The people we lost were extraordinary. They span generations, born in America and immigrated to America. But just like that, so many of them took their final breath alone in America.”

Earlier, the President had all the flags at the White House lowered to half-staff in honor of those who have died during the pandemic. They will remain lowered for the rest of the week.

The president and first lady Jill Biden also held a moment of silence for the victims of the pandemic.