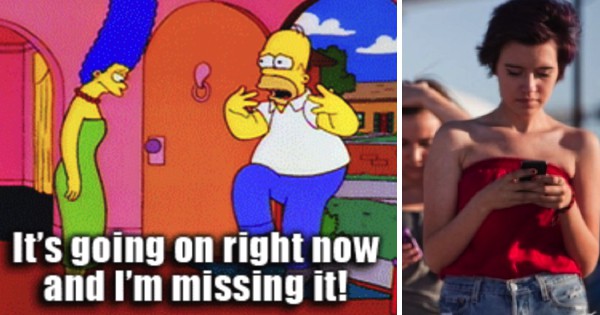 Short for ‘fear of missing out’, FOMO plagues the best of us. Thanks to social media, it’s a lot easier to know what’s going on around us. Or rather, what we’re missing out on.

If any of these signs strike a nerve, you might just be suffering from a bad case of FOMO.

#1. You’re constantly on your phone.

You’re continuously checking every social media account you have. And refreshing pages literally every minute. Look at all the fun everyone is having without you!

Even when you don’t get it, you’ll fake a laugh so you don’t feel left out.

#4. You’re willing to live beyond your means.

You’ll starve for the next six months but going to Vegas for the week was soooo worth it, right?

#5. You engage in gossip waaaaaaay too much.

Whether it’s about a coworker or that b*tch on Real Housewives last night, you just need to be in on everything.

“Can’t let them have fun without me.”

#8. You have FOMO so severe that you refuse to leave parties, even when you’re tired.

Or when you’re basically dead. You’re too scared of missing out on the possibility of something exciting.

#9. You double, triple, and quadruple book everything.

That way no one misses out on anything. Especially you.

#10. Even when you’re out with people, you’re constantly checking your phone to make sure there’s nowhere better you should be.

You know, just in case.

If you’ve got it bad, just remember that there’s no reason to stress yourself out over things that may or may not be happening. Epic things happen when we least expect them.