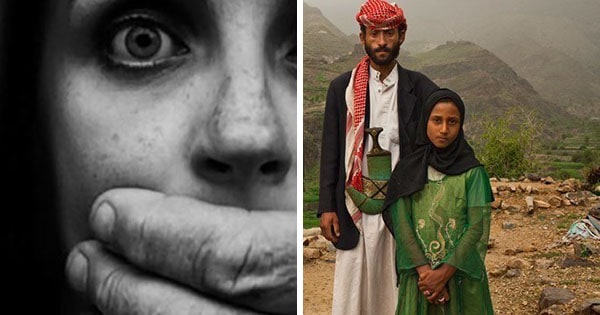 It seems that the world has come a long way when it comes to gender equality: us women have the right to vote, we’re in management positions, we’re in politics, and there are even times when we aren’t sexualized in the media. Heck, Hollywood has even come far enough to make successful movies that include scenes where women talk about things other than men.

But in all honesty, we’re still a long way from calling feminism dead. And here’s just a few reasons why.

#1. Honor killings are a thing.

A human being’s right to live should be respected — male or female. Yet that doesn’t seem to be the case in countries like India and Pakistan where around 2,000 women are killed by family members every year in order to “restore the family’s honor”. Internationally, the toll jumps to about 5,000 women.

Sure, steps are being taken to stop these killings, which are already technically illegal in both countries, but the issue isn’t one of government apathy or religion, but cultural conceptions of female inferiority.

Again unlinked to religion, hundreds of millions of women have their genitals mutilated every year. The mutilation most often involves the violent removal or mutilation of the clitoris, and in other cases, also includes the cutting and sewing of the labia.

Unlike most cases of male circumcision, FGM causes nothing but painful complications, including extreme pain, infertility and trauma.

So why do people do it? To preserve the longevity of a woman’s virginity, mostly. It’s a cultural and ethnic phenomenon, perpetrated more often than not by female elders and other women. In some countries it’s so prevalent that over 85% of women have had their genitals mutilated.

Daily, nearly 40,000 girls are wed before they’re 18. In 36% of cases, the girls are younger than 15. Getting married that young robs a child of their education and childhood, replacing it with  the duties of marriage. In addition, child brides have more health complications and maternal mortality. Statistically, child marriages end up having a larger risk and frequency of sexual abuse and domestic violence compared with marriages between adults.

Girls aren’t alone, as boys are often married under the age of 18, but the statistics are skewed towards females far more than males.

#4. Baby girls are killed when baby boys are more valuable.

This is a prevalent phenomenon in China. Due to the country’s rapidly rising population, China’s government enforced a “family planning policy”, which required that families have only one child, with exceptions.

Minorities were exempt from the policy, and if the first child was a girl, then parents may have another — but defying the policy meant heavy fines. To avoid this, families stricken by poverty often opted to kill their first or second child if it was a girl, due to the fact that girls bring in less income, and the fact that the government’s fines would push families past financial ruin.

Because of this, infanticide statistics in China make for depressing reading. Chinese girls are twice as likely to die in their first year of life as their male counterparts, with the risk of death being three times higher for the second girl than the first. Some parents seek a divorce and then remarry to have another child, abandoning their previous child — 95% of the time, abandoned children in rural communities land outside of state-controlled orphanages.

Rape is an incredibly difficult statistic to track — a massive amount of rape is unreported, and in many cases, simply not taken seriously by men, women, and the authorities. It’s a pandemic in developed and developing countries alike. Reporting rape can be dangerous in countries where premarital sex and adultery lead to the death penalty — or an honor killing. Although male-on-male, female-on-female, and female-on-male rape is a prevalent problem world-wide, statistics for female-on-male rape are the highest, and the most socially-pronounced.

And it all starts in society. In Bangladesh, 61% of urban rapists did not feel remorse afterwards — and 95% weren’t prosecuted in any way. Globally, most rapes don’t lead to legal convictions.

Sexual harassment in the workplace is still largely an issue of unequal power between men and women. In the EU, nearly half of all women in the workforce have been sexually harassed, either verbally, or physically; in contrast to Southeast Asia, where the numbers are closer to 30-40%. In America, over 80% of 12-16 year old schoolgirls experienced sexual harassment. Yep, schoolgirls — minors.

It’s a pervasive, global problem, regardless of nation, region or culture — and if half of all women working in the European Union have reportedly been harassed for their gender, feminism definitely isn’t through with creating equality between men and women.

#7. Forced prostitution is a booming business.

And it’s everywhere. Over 20 million women, men and children are sold into the sex trade each year without their consent. 98% of sex slaves are female, and at least a tenth of them are children. As always, poverty and gender inequality are the root cause.

Girls, especially poor ones, are seen as a method for profit in countries where the sex trade is a flourishing industry — in America alone, over 100,000 children are forced into sex slavery every year.

In modern society, while pressure exists on both genders to conform to stereotypes, women are still given a harder time. Whether it’s being generally considered less fearless and capable of leading, or being sexualized in the media, or catcalled for simply walking down the street — society consistently puts women second in positions where they could do just as well as men, and demeans them in ways men aren’t usually demeaned.

Street harassment is a thing both men and women share in common, albeit over half of all women in a 2,000-person US survey experienced sexual comments and catcalls versus 25% of men, most of which received either homophobic or transphobic slurs. Many call street harassment a feature of freedom of speech — but its prevalence also displays how women, trans men, and gay men are treated inferiorly, and regularly insulted and harassed.

#9. Women are mostly the stay-at-home parent.

This statistic is on the rise. In the past, it was normal for a man to be the family breadwinner, while the mother stayed at home and took care of the children — and spent most of her time in the kitchen. But over the years, women have campaigned for better and fairer shots at a decent career — and some families even reversed the roles, with women doing the breadwinning.

Even so, more stay-at-home parents are female rather than male, because men still get higher-paying opportunities in general. Race and economic factors play into this as well, with a third of stay-at-home moms living below the poverty line, and 37% and 36% of children from families with stay-at-home moms tend to be Asian and Hispanic, respectively.

Make-up is a large part of this phenomenon. While men perceive the same sort of pressure to “lose weight, get ripped” and so on, the pressure on women to have a great body and a flawless face is more pervasive. Consider the lengths women go (and amount of make-up they use) to get the “natural” look.

Obesity in men and women generally leads to lower wages, although larger women tend to lose more than their male counterparts.

This is changing, of course, but as of now the majority of successful CEOs in Fortune 500 companies are male and white. Women are rising up the power ladder, yet racial minorities remain at the bottom rungs. There are now fewer Asian-American CEOs on the list as there were in previous years, and the numbers for Latinos and African-Americans have been dropping as well.

But the trouble with stats like these is that true diversity isn’t seen solely in the percentages of minorities, but rather in the availability of equal opportunity for men and women of all races and backgrounds in big business. It’s still a boy’s club, with over half of Fortune 500 companies stating that they conformed to anti-harassment policies not for the wellbeing of female employees or equal opportunity, but for fear of legal fees.