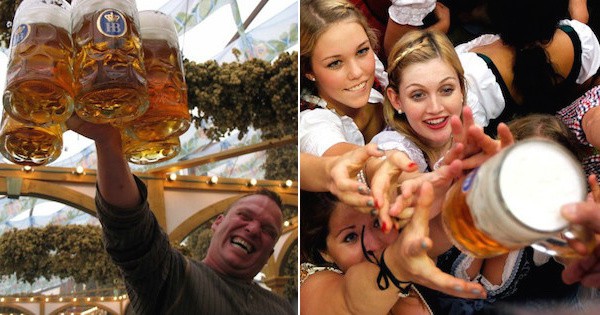 Aye, everyone enjoys a good pint. But did you know that your body does, too? Although you probably don’t need to be persuaded, here’s a dozen peer-reviewed reasons you should drink more beer. Bottoms up!

#1. Beer is good for your kidneys. Seriously.

Researchers in Finland (bless ’em) have discovered that beer keeps your kidneys from developing dreaded kidney stones. Although it isn’t clear why, men who drank beer and had a higher magnesium intake during the study had as much as a 40% reduced probability of getting kidney stones per bottle of beer a day.

This is a good thing for several reasons — one, it helps with digestion. Two, it helps you fill up quickly, so you don’t go on snack offensive. And three, more dietary fiber leads to lower risk of diabetes, heart disease, and leaky gut problems. Additionally, beer tends to have silicone levels in it, helping maintain bone density.

The best source of B vitamins seem to be fermented things — and beer beats wine in that category by as much as 30%. The darker and stronger the brew, the better it is for your health. Beer also contains some much-coveted B12 and folate — but keep in mind that alcohol devalues B12 absorption, making beer an unreliable (but still interesting) supplement.

Dark Trappist beers in particular tend to have a high number of antioxidants, part of which may indeed help save you from heart attacks. The verdict isn’t in on that one, but one thing is for sure — it’s another great excuse to grab a cold one!

Hot beer served with a couple teaspoons of honey makes for a great cold remedy (if that’s your thing). According to Japanese researchers (and Bavarian grandmothers) the hops in the beer, when heated, fights viral infections like the common cold. The active compound itself (humulone) could combat pneumonia and bronchitis-causing viruses in children.

Once again, hops comes to the rescue! Another phytochemical in hops happens to fight cognitive diseases, keeping your brain sharp and healthy well into your years. Not only that — a slight beer-buzz has been shown to boost creativity. *hic*

#7. Beer is a great post-workout drink.

Spain discovered that a good ol’ cerveza helps hydrate better than a glass of water after a good workout. Testing this on students at Granada University, he also discovered that the carbonation and carbohydrates in beer leads to better post-workout recovery, due to the replenished calories (muscles tend to atrophy post-workout if you don’t consume something to burn).

Speaking of calories, however, a pint of Guinness gives the body less to burn than the equivalent amount of orange juice — or skimmed milk, for that matter. Say what, a beer belly? That’s been proven to be a myth, so fear not for your six-pack (the one in the fridge, that is).

Remember that chemical compound (xanthohumol) that helps you keep your head into old age? Well, that same compound may actually help you fight and inhibit cancer-causing enzymes — even more than the phytochemicals in, say, soy. The Germans brew specifically to get more of this stuff in, so go grab a lager!

Antioxidant-rich beers (lagers and stouts, and other dark brews) also help fight off cataracts and protect your eyes — but, in moderation! Researchers found that three or more drinks a day counteracts the benefits, putting your right back where you started (and worse).

#11. It’s antimicrobial. Cheers to that.

Among other things, beer is antimicrobial (again, thanks to hops) and assists in achieving better vaccine responses in the body. Too much alcohol, however, offsets these gains, so keeping your intake at responsible levels is key!

Alcohol and caffeine, in particular (and in moderate amounts) has lead to a decrease in the development of gallstones — a mixture of bile, cholesterol and calcium that’s indicative of a poor diet and leads to some pretty painful tummy aches. Well then, better grab a pint. Or two.