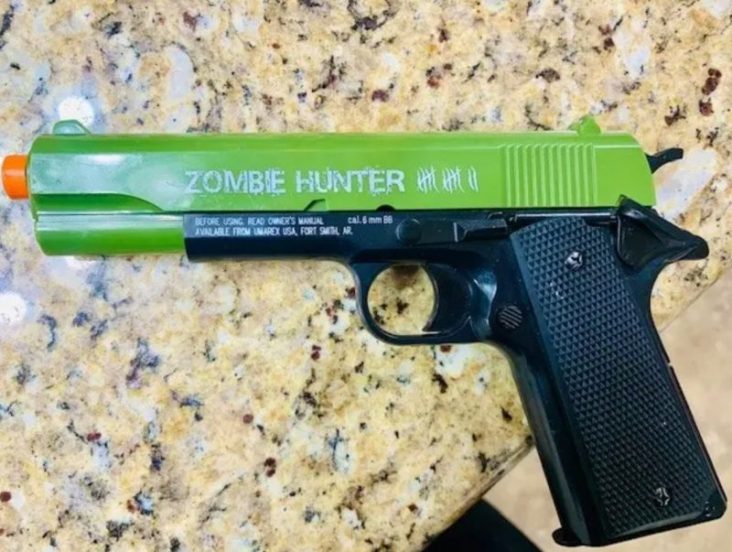 The gun was, in fact, toy — “a neon green and black handgun with an orange tip with the words ‘Zombie Hunter’ printed on the side.”

A 12-year-old boy from Colorado Springs, Colorado received a five-day suspension from school after one of his teachers spotted a toy gun in his hands during an online art class.

According to a local news outlet, Isaiah Elliot was participating in a group virtual learning session when he allegedly ‘flashed’ what looked to be a weapon. The ‘gun’ was, in fact, a toy.

The teacher “notified the school principal who suspended Isaiah for five days,” a suspension reportedly consistent with threatening classmates even though Elliot was in a virtual environment and not in a physical classroom where a “threat” of violence may be more valid.

The principal then contacted the El Paso County Sheriff’s Office to conduct a “welfare check” on Elliot’s family.

Local media reports that the principal never consulted with the boy’s parents to clarify the incident. Fox 31 states that the teacher was aware that it was a toy gun and not a real weapon.

Elliot’s parents were outraged by the incident, especially since Elliot and his parents are of African-American background.

Curtis Elliot, Isaiah’s father, told local media that “It was really frightening and upsetting for me as a parent, especially as the parent of an African-American young man, especially given what’s going on in our country right now.”

“For them to go as extreme as suspending him for five days, sending the police out, having the police threaten to press charges against him because they want to compare the virtual environment to the actual in-school environment is insane,” Elliot’s mother, Dani, added.

Elliot’s mother noted that neither the teacher nor the principal bothered to contact her or her husband, which is a decision that she can’t understand.

“If her main concern was his safety, a two-minute phone call to me or my husband could easily have alleviated this whole situation to where I told them it was fake,” she said.

The school district refused to comment on the incident. However, it did say that they weren’t “familiar” with all the aspects of virtual learning but will continue to support all families in their school, ensuring they feel safe, respected, and educated.