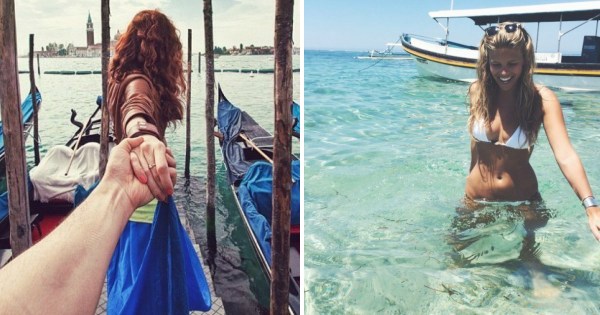 1. She will be really smart about finances.

The traveller knows that to fuel her wanderlust, she needs to be smart about her purchases. You won’t catch her partying at a one-night Avicii concert, or shelling her hard-earned money on a $1,200 Prada bag. She scrimps and saves, fattening up her piggy bank to fund her insatiable thirst for foreign waters. When travelling, she will be more than happy with a bunk bed in a backpacker’s inn — no fancy hotels for this one.

2. She will know organized spontaneity.

The traveler will teach you that being organized and spontaneous are not mutually exclusive. She will be a daring travel companion, jumping on any chance at adventure, but she won’t be irresponsible. She manages her time and money well, and makes sure to book a room in advance so she won’t be sleeping on a bench in Thailand during Full Moon Party weekend.

3. She will have the best stories.

Whether it’s about a protest she accidentally witnessed in Hong Kong or the time she couldn’t hold her puke on a boat, she’ll have lots of entertainment material for your dates. Perfect for sharing over a plate of Nepalese momo and dal bhat,  or during long train rides in Mumbai.

4. She will always be prepared for a curveball.

For the wanderer, the typical backpack is large enough to fit the essentials but light enough to lug around for 10 hours of sightseeing. She’ll be ready with almost anything you’ll need in case of an emergency. Hungry? Here’s a cereal bar. No time to shower? Wipe off with these wet tissues. Mosquitoes bothering you? Let me pull out my bug spray. Lost your purse with all your cash and ATM cards? Sorry pal, you’re on your own.

5. She will be whip smart and lightning fast on her feet.

Frequent travelling has taught her to listen to her gut and make speedy decisions. And most of the time, she’s right on the money. Like the time she decided not to go with an unusually aggressive tour guide, only to be told by some locals afterwards that he was a known scammer who makes his living off tourists. Needless to say, she’s seen too much to be outsmarted.

6. She will have an adventurous appetite.

For her, there’s no such thing as “too spicy”. While other people might drink their body weight in water to extinguish the fire on their tongues, the traveller will simply wipe off the sweat on her brow and take another big spoonful of those extra spicy Korean Jjamppong noodles. She’s learned early on not to judge food without a taste test. One of her favorite dishes is Vietnamese and sounds like a Teletubby, but she’ll assure you that it’s ridiculously delicious.

7. She will be an expert haggler.

After shopping at far-flung markets where bargaining is the number one rule, the traveler will have haggled with the best of them. She knows when something’s been given the “tourist price” and gets it taken down to what locals would pay for it, sometimes (but rarely) even lower. Expect her to walk away from arrangements where she knows she’s being taken advantage of. Be careful of using flowery words around her; she has the special ability to see right through bullshit.

When she’s not hiking within a virgin forest or navigating the back alleys of a city, the traveller will most probably be relaxing on a hammock by the beach, paperback in hand. She is driven to travel by the same passion that makes her devour books like popcorn — to further understand the world around her, to meet the people that she shares this large land mass with, and to discover things that cannot be learned inside the four walls of a classroom. Expect her to mention a certain book or author in a few conversations; bonus points if you understand her references.

9. She will be all-natural.

Her hair probably hasn’t seen a salon ever since she started her trip. You won’t find any product lathered on her face apart from sunscreen. And she’d rather fund her next ticket to Asia than spend her money on a facial. It’s not that she intentionally goes out of her way to avoid dolling up — because she can rock lipstick as well, if she wanted to — but really, her priorities just gravitate more towards prettifying her passport rather than her face.

The traveler is a professional sun-walker. She tries to fit 30 hours into a 24-hour day, which means being out enjoying the sights and having little to no sleep. The side effects? Sun-kissed skin, a sprinkling of freckles, and a bright, megawatt smile.

She always needs to be on the move. You’ll almost never see her on the couch, just bumming around. She’s kind of an adrenalin junkie, too, so be ready to tag along on her many adventures. Make sure you’re game for her crazy ideas, from riding waves to eating bugs. She’ll appreciate being able to share her passion with another soul.

12. She will be independent.

Chances are, she has had to rely on her own abilities for most of her travels. She knows how to make her own campfire, screw her own fins, or fix her bike’s chain ring. She’s a pro at reading maps  and following road signs. You might find it hard to impress her, because anything you can do, she can do, too — and better.

13. She will take you to the best places.

If she has to, she will drag you kicking and screaming to a temple on a mountain even with only 3 hours of sleep. She will bribe and threaten you to go cliff-diving with her. You will know how it feels to be strong-armed by a woman who enjoys swimming with whale sharks in the Philippines. At the end of the day, you will be grateful to her for pushing you to your limits.

Many delayed flights and countless failed hotel bookings have transformed her into a zen yogi, capable of letting any small trifle slide off her back. The things that consume the regular person (office politics, the rude server at Dairy Queen) won’t make her bat an eyelash. She’s learned not to take herself or others too seriously, and to have an optimistic outlook on life. She doesn’t have bad days, she has bad moments. Her motto? Hakuna matata.

Molded not only by her education and family, the traveler is a product of the architecture of a temple in Cambodia, the cobblestone streets of London, the snowy mountain peak of Everest, the smiling faces of the people in Jakarta. Her horizons will have widened, making everything else tiny — and irrelevant — in comparison. She’s used to different lifestyles, and will be more accepting of your quirks than most people.

16. She will teach you how to see the world differently.

She’s the kind of girl who goes out of her way to look at sunsets. She’s genuinely happy having only a few dollar bills in her pocket as long as she’s on the road, on a mountain, or by the beach. She sees beauty in the simplest things, like a flower growing by the sidewalk. Traveling has given her a greater appreciation for life. She’ll be a refreshing breath of fresh air from the hectic world you’re both moving in. And the best part? Spend enough time with her, and before you know it, she’ll have turned you into a traveler, too.