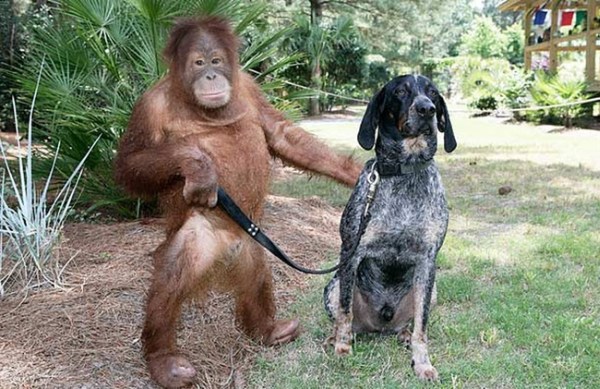 Suryia was heartbroken when his parents died. The zookeepers couldn’t even get the 3 year old orangutan to eat. That all changed once Suryia met Roscoe. The old dog wandered into his habitat, sick and weak. Suryia focused his energy on nursing the dog back to health. Now they enjoy time together at the zoo they both call home. 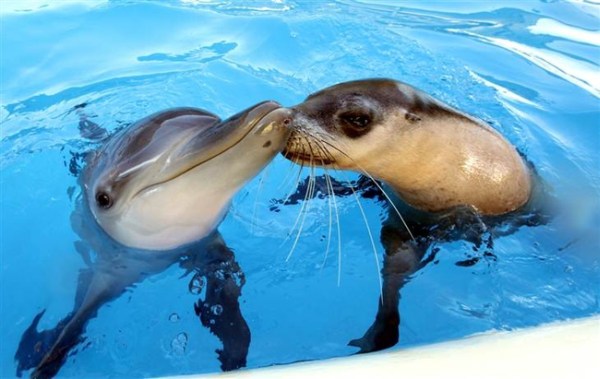 This odd couple would be natural competitors for food in the wild, but in captivity Jet and Miri are the best of friends, playing together in the pools of Pet Porpoise Marine Park in Australia. 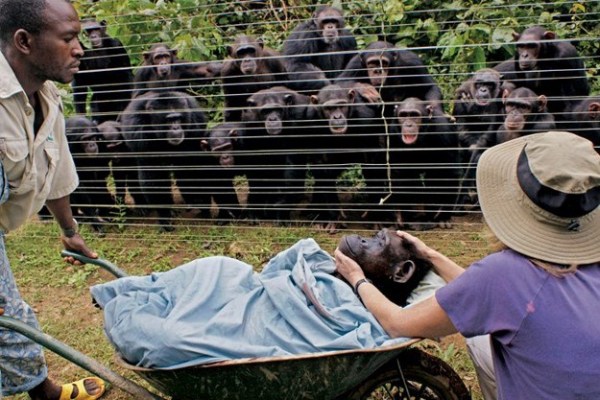 Cindy was a beloved chimp amongst those at her rescue in Cameroon. When she died of heart failure, her fellow chimps consoled each other by hugging. They watched grievously as their friend was taken away. 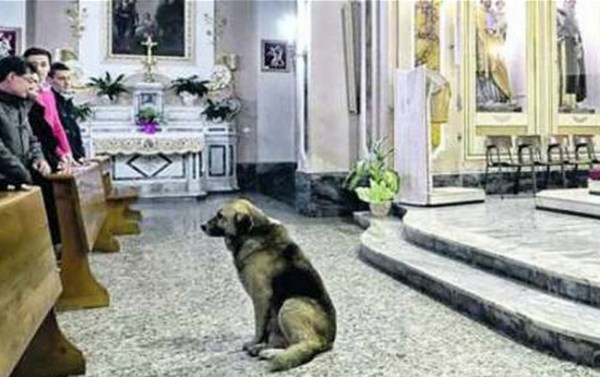 Every Sunday Tommy’s owner would bring the dog to mass with him. When his owner died, Tommy decided to keep that tradition. The priest of the church says that Tommy keeps the service sacred, never barking or being disruptive in any way. He just sits quietly and takes in the memories. 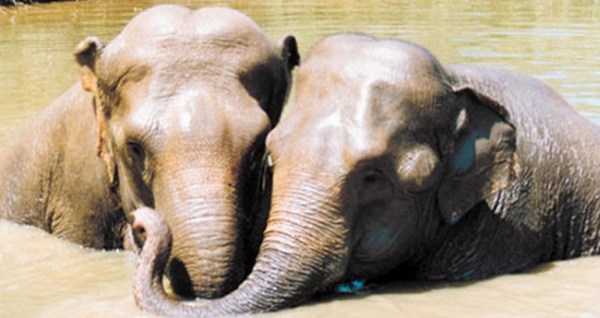 These two besties are named Jenny and Shirley. When Shirley was 20 she was held captive in the same abusive circus as Jenny, who was just a baby at the time. When they happened to meet up at the same animal sanctuary the old friends hastily embraced and have been inseparable ever since. 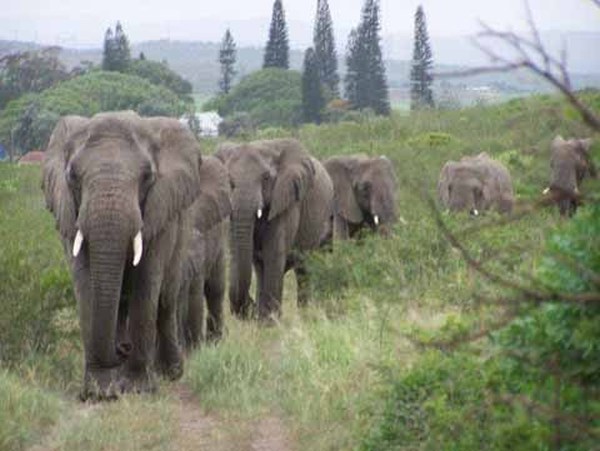 These elephants performed a solemn funeral march to famous conservationist, Lawrence Anthony’s house on the day he died. These elephants were sent to death because they deemed violent, but Anthony convinced authorities to see them in a new light. The herd marched 2 hours to thank the man who saved their families. 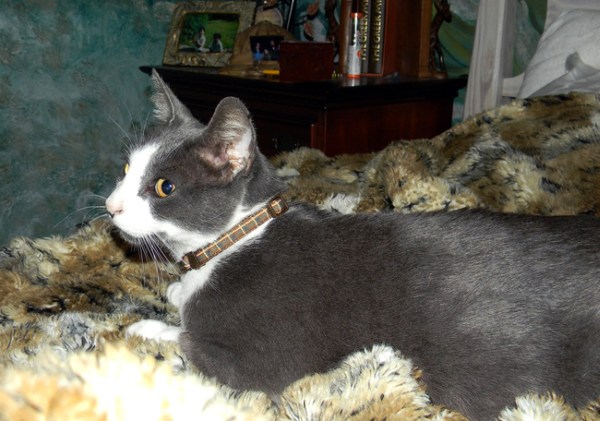 Five years after Hurricane Katrina devastated her home, Jennifer got a message on her answering machine from the Humane Society saying her beloved cat had been found. Even though the cat had been lost for five years, when Scrub began living with Jennifer again he immediately took his old sleeping place underneath Jennifer’s covers. 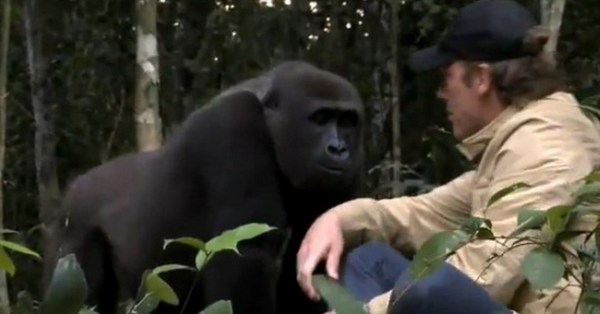 Kwibi was raised in England by his human owner, Damian. When Kwibi grew older, Damian felt the best thing for him would be to go back to the wild and live with his own kind. Five years past and Damian decided to visit his old friend. He whistled from the bank of the river where he left the young gorilla. Sure enough, out of the jungle brush appeared Kwibi. “He looked into my eyes with such intensity and such love. It was an incredible experience,” said Damien. 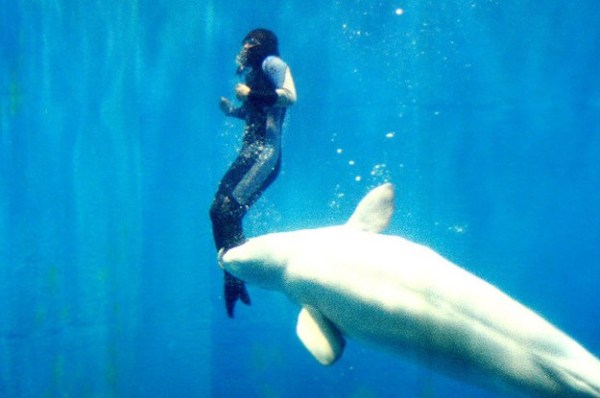 During a diving contest, Yang Yun thought she was going to die when the arctic temperatures of the water paralyzed her legs. Luckily, Mila was there to save her. The beluga whale used her nose to push her to the surface. 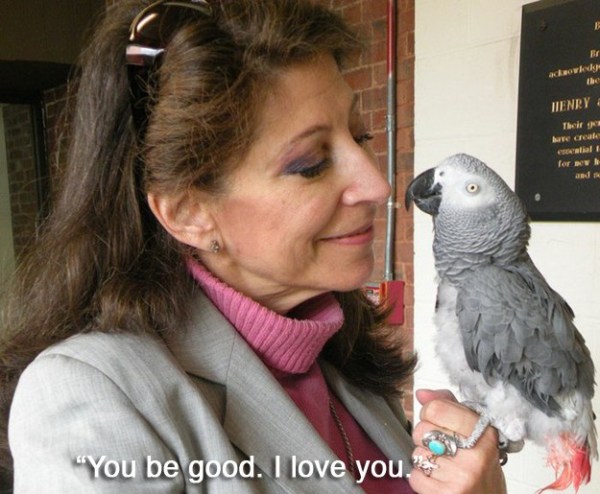 “You be good. I love you.”–The last words of Alex the grey African parrot. Alex had a close relationship with his owner Irene and wanted to express it before he passed away in 2007. 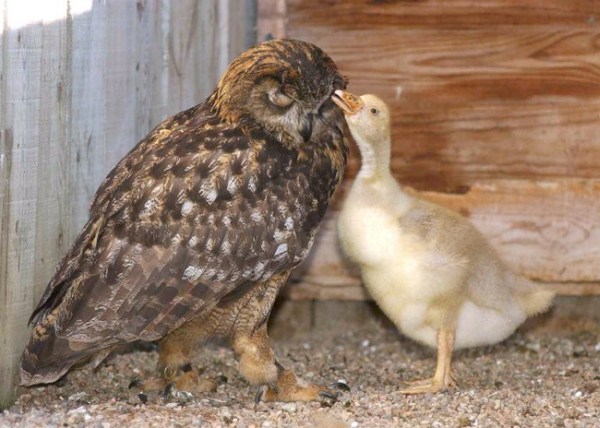 Gandalf the owl tried and tried to lay an egg, but when she would it wouldn’t hatch. Her owners gave her a goose egg, and when it hatched she raised the baby bird as her own. 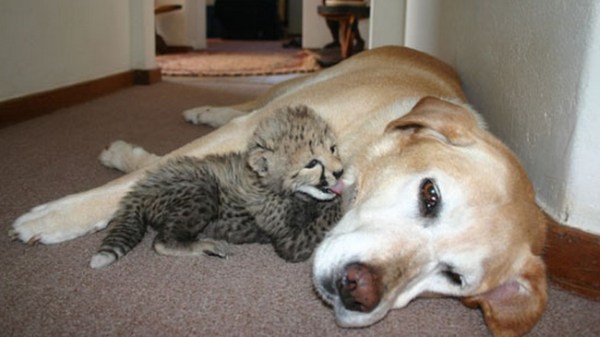 Another adoptive mother, Lisha the retriever, has raised over 30 animals, including baby cheetahs, tigers, potbelly pigs, porcupines and even baby hippos.

Hanama the orangutan at the Myrtle Beach Safari Park in South Carolina enjoys is fostering two orphan lion cubs until they are able to fend for themselves.