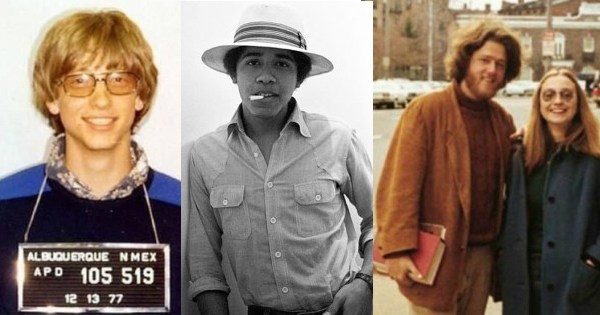 Before they were famous, these celebrities were just ordinary everyday people. These rare photos of celebrities when they were young should remind you that fame is all but an illusion.

#2. Brad Pitt (holding the ball) with his childhood basketball team the Cherokee Rejects in Springfield, Missouri [1977].

When asked what the trophy was for, Brad said he can’t remember.

He had been arrested for speeding and driving without a license.

#4. Bill and Hillary Clinton in their Yale days as college sweethearts [1970s].

#5. 23-year-old Frank Sinatra after he was arrested for adultery and seduction, a crime at the time [1938].

Sinatra was released on a $1,500 bail. Later on, the complaint was withdrawn after the complainant was found to be married.

Jones was part of the undefeated 1968 Harvard varsity football team.

#7. Morgan Freeman sporting an afro in the TV show The Electric Company [1970s].

Freeman played Easy Reader on the PBS’ The Electric Company, a program intended to develop grammar and reading skills among elementary school kids.

Buscemi rejoined NYFD after 9/11 and helped search for survivors at Ground Zero.

Ali claimed that an underwater training gave his hands added resistance. It was a practical joke, he didn’t even know how to swim.

#12. Steve Carell dressed in costume for a play in his final year at Middlesex School [1980].

Steve was playing the role of Grandpa Vanderhof in their school adaptation of the comedic classic, “You Can’t Take it With You.”

In 1968, Arnold Schwarzenegger had emigrated to the United States and spoke very little English.

The Wailers would disband in 1974 because of some members’ refusal to tour. Marley led a brief but incredibly successful solo career before reuniting with his old crew.

He was disguised as a member of a tourist party and instructed to embarrass Ronald Reagan during his first visit to Moscow.

Prior to the revolution of 1917, Stalin was a poet and a vehement opponent of the Russian government. This is one of the information cards that Russian police kept on file.

Clinton briefly considered dedicating his life in music. He abandoned his dream upon realizing he can never be Coltrane nor Getz, but can be very good at serving the public.

Williams was voted “Least Likely To Succeed” while at the school. By the time of his death, at least 106 acting credits were attributed to him.

She remains the only member of the Royal Family and the only state leader to have served in WWII.

#39. The Iron Lady, Meryl Streep, as a freshman class treasurer.

He marched in as the cheerleader for the Broncos, which would then beat the Patriots 45-1o.