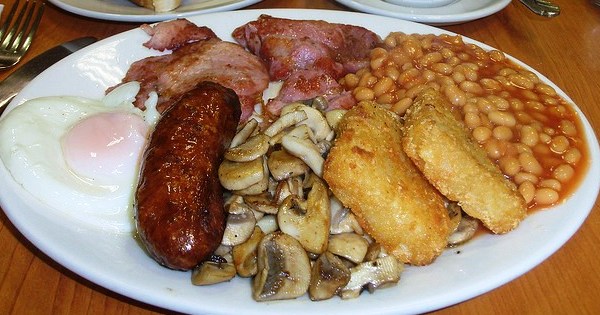 It’s the most important meal of the day, yet despite all the choices and varieties possible, many of us just rush through it and enjoy it far less than we should do.

Fresh bread, a variety of hard and soft cheeses, fresh juice, olives, jam and butter can all be found on the Israeli breakfast plate.

Pan a la Catalana, or Pan con Tomate, is a simple and popular breakfast dish in Spain. It consists of bread rubbed with fresh garlic and ripe tomato, followed by a quick dash of olive oil and salt, and then topped with cheese, ham or sausage.

Different breads with a variety of jams, cheese or butter to spread on top.

Lots of delicious fruit, and a nice bagel with some cream cheese for that extra feeling of fullness. This is a quick, simple breakfast that packs a punch.

Pannkakor is a pancake made from batter and fried on both sides – much like a crepe. It is served with a rich and sweet, fruity filling.

It might not look that magnificent, but the Hafragrautur, or oatmeal, is favored in Iceland for good reason: its a great way to warm yourself up in the cold mornings. It’s usually served with brown sugar and a few raisins or nuts on top.

It’s called Vegemite, and apparently the Aussies love it. So much so that a jar of these can often be found in a travelling Aussies backpack!

A tasty selection of meats, cheeses and bread. A very simple and popular breakfast.

Cappuccino and croissant. The italians favor this stylish breakfast, it’s quick and can be had on the go.

Rye bread, cheeses, salami, ham, pâté, honey, jam and sometimes even thin ‘plates’ of chocolate. Apparently bacon isn’t that popular in Denmark. Thanks guys, you can send them all over to the UK!

It’s all about the local fruits here. Mangoes are popular fare to keep you regular. As for keeping your energy up rice is the top choice, or the little sausages, known as longganisa, you can see above. When fried with salt and garlic cloves it’s known as sinangag. The sinangag is then combined with eggs, meats and beans and bob’s your uncle, fanny’s your aunt, a delicious Philippine breakfast is born.

Featuring reindeer meat and an egg nestled on a pancake. Poor old Rudolph, he won’t be able to join in any reindeer games now, will he?

Wursts, local cheeses and freshly baked bread is the normal fare for a German breakfast. All washed back with a delicious coffee.

Home made thick pancakes with syrup and blueberries, topped off with a few rashers of bacon. Anyone not wishing for a coronary usually opts for a bowl of muesli, so I’m told. Pancakes all the way for me!

Here we have rosemary roasted potatoes, Indian tofu scramble, lentils, veggie sausage and banana pepper toast. Breakfast cuisine in India varies hugely depending on the region but if you think of your Indian breakfast somewhere along these lines, you would be correct.

Much like a full English and a full Irish, but the country’s USP is the ‘sumptuous’ slab of haggis served alongside every fat-fried egg. Don’t know what haggis is? Scroll down quick if your animal eating habits err on the queasy side. It’s sheep’s heart, liver and lungs minced with onion, oatmeal, suet, spices, salt and stock

You’ll find this dish at stalls throughout Thailand. It’s a minty spicy fish with a sweet & spicy pork, served with rice. By all accounts it tastes excellent, and it’s cheap at only 30 Bhat. Thai breakfast fare isn’t all that different from what you’d eat for lunch and dinner. 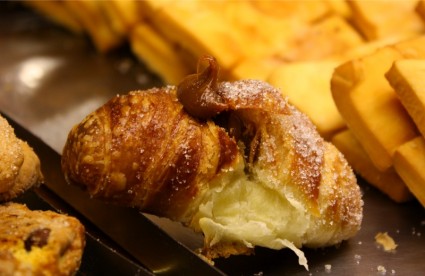 Usually consists of “mate” (an infusion drink made with leaves of “yerba”) or dulce de leche with “facturas,”a croissant-like typical pastry. Thanks Elena Okada for the tip!

You’ve had English and Scottish, now it’s time to learn the Irish USP. That would be white pudding and soda bread.

That eggy looking section is actually perogies. Perogies are boiled, baked or fried dumplings made from unleavened dough and traditionally stuffed with potato filling, sauerkraut, ground meat, cheese, or fruit. Then you’ve got some sausages and toast to mop it all up.

The delightful plate above consists of beef tips, chilequiles and other assorted goodies eaten in Manzanillo. Nachos, cheese and beans always feature heavily and a delicious, spicy breakfast is the norm.

Oladi is the breakfast of choice in Russia. They’re sort of like pancakes and kind of like Yorkshire puddings, hot, just fried, soft inside and with a crispy edge! They’re best enjoyed with soured cream, honey, jam or fresh berries.

Ceviche is popular whatever time of day, breakfast, lunch or dinner. It’s a seafood dish made from fresh raw fish marinated in citrus juices such as lemon or lime and spiced with chilli peppers. What a feast.

Saltenas are a bit like empanadas crossed with Cornish pasties. They’re the traditional option for a Bolivian breakfast and usually filled with meat and vegetables, and slightly sweetened with sugar.

The breakfast of choice here is Foul Madamas. It’s made from fava beans, chickpeas, garlic and lemon. Above you’ll see the dish topped with olive oil, cayenne, tahini sauce, a hard boiled egg, and some diced green veggies.

What do you mean you’ve never had tofu for breakfast? It’s a popular choice in Japan, along with fish and rice. Soak it in soya sauce and you’ve got yourself one delicious, and semi-healthy breakfast.

A hot bowl of Mee – noodles mixed with egg, vegetable and tasty spices.

It generally consists of boiled mutton with lots of fat and flour and maybe some dairy products or rice. In western Mongolia they add variety to their diets with horsemeat.

Fry jacks are a staple in Belize breakfast cuisine. They’re deep-fried pieces of dough that are often accompanied by beans and eggs, or jam and honey.

Always consists of Pogácsa. Well, nearly always anyway. Throughout the year there are festivals dedicated to it and the recipe changes region to region. They have a scone-like consistency and as well as a popular breakfast item, they’re also used to bulk up goulash meals.

Breakfast is similar to lunch and dinner in Korea. You’ll get a small plate of kimchi, a bowl of rice and a bowl of clear vegetable soup.  A good old-fashioned slice of toast is also a popular choice, but that doesn’t make for nearly as good a picture.

In Pakistan you’ll get Aloo Paratha for your breakfast. It’ s an Indian unleavened flatbread made by pan frying, wholewheat dough on a tava. The dough contains ghee and the bread is usually stuffed with vegetables. It’s best eaten with butter, chutney or some other spicy sauce. It’s not uncommon to roll it up and dip it in your tea

Curd cheese on a wheat bloomer – known locally as ‘cheese on toast’. The creamy topping can be supplemented with ricotta or fromage fraiche instead, if you prefer.

The choice varies depending on the are and upbringing you’re from. Labneh, hummous and falafel are all popular choices and are usually served alongside olive oil, lamb sausage, jam and butter, turkey or beef mortadella.

Empenadas are the order of the day. Fill the little pastries with fresh cheese, minced meat or any combination of veggies and beans.

There are  a variety of regional staples to keep your stomach grumbles at bay throughout the day. In Cundinamarca this changua dish is very popular. It’s made from milk, scallions and cheese. 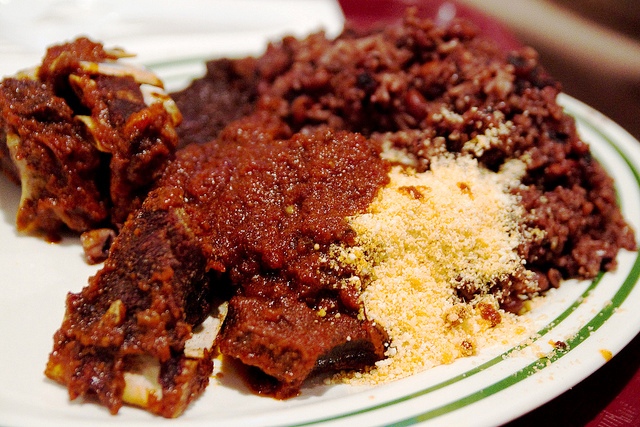 The most popular breakfast item in this African country is waakye. It’s basically rice cooked in beans and is found at all the street stalls in Ghana.

Like a lot of large countries the typical breakfasts vary region by region. But a popular dish across the country is katogo – it’s a combination of green cooking bananas mixed in a stew from beef or in a sauce from vegetables. The picture above is banana with cow organs.

To be a Bahamian breakfast it must contain grits. Grits are dried ground hominy, or corn, for anyone not in the loop. You mix it with boiling water and the grits becomes a porridge. Its popularity came from slavery times when it’s all the slaves had to eat. Nowadays it’s topped with fat prawns and meat to spice it up a bit.

Gallo Pinto is the standard breakfast fare in Costa Rica. It’s made from black beans, rice, optional soured cream, salsa and a corn tortilla. Costa Ricans will often have a bit of avocado, fried ripe plantain or cold meat on the side.

49. Breakfast in the Dominican Republic

You need to try the mangu. Mangu is made from mashing boiled plantains with butter and either salami, cheese or eggs. Top it off with a hot chocolate and you’ve got yourself some traditional Dominican Republic fare.

It must have beans, sausages, bacon, eggs, mushrooms, hash browns and toast. It should all be knocked back with a cup of tea! If you’ve never experienced a full English breakfast before, do yourself a favor and get to the nearest cafe that serves one!