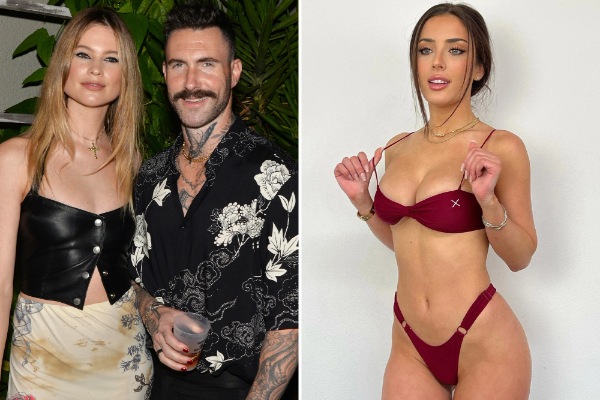 An Instagram model has gone viral claiming that she had an affair with Adam Levine.

At first, the lady, Sumner Stroh, referred to the cheater merely as a “guy who is married to a Victoria’s Secret model.”

Since 2014, the 43-year-old singer of Maroon 5 has been wed to Behati Prinsloo, a former Victoria’s Secret Angel.

Stroh, 23, stated in the video, “At the time, I was young, I was naive, and, quite frankly, I feel exploited,” without elaborating on the specific date of the alleged affair.

“I wasn’t in ‘the scene’ like I am now, so I was definitely very easily manipulated.”

Stroh, however, claimed that the alleged affair happened “last year,” when she “graduated college in 2021.”

The model insisted that she and Levine had a “physical” relationship when questioned whether the alleged romance was sexual or emotional infidelity.

She said, “I haven’t spoken to him in months.”

Stroh exposed Levine as her boyfriend by uploading pictures of direct conversations that the rock star allegedly gave her.

“Maroon 5 is basically elevator music at this point, so I’m sure you know who Adam Levine is,” she told her followers, taking a slight jab at his band.

According to the texts that flashed on a green screen behind her, Levine allegedly told the woman, “It is truly unreal how f–king hot you are. Like it blows my mind.”

The “She Will Be Loved” singer allegedly continued by writing,  “You are 50 times hotter in person. And so am I hahahah.”

Levine and Stroh supposedly dated for “about a year,” but a few months later, he allegedly asked her if he could name his next kid after her.

“He said, ‘Ok, serious question. I’m having another baby and if it’s [a] boy I really wanna name it Sumner. You ok with that? DEAD serious,’” the model said, reading the alleged DM aloud.

The messages appear to have been connected to Levine’s verified Instagram page.

Levine and Prinsloo have made their third child’s impending birth public knowledge. The couple already has two kids, Gio Grace, 4, and Dusty Rose, 5.

Levine is reported to have called Stroh over the namesake request, at which point Stroh said she was “in hell at this point.”

“I mean, my morals were unknowingly compromised,” the brunette beauty claimed. “I was completely manipulated.”

Stroh claimed she was the victim of extortion by a friend who threatened to give the information to a tabloid, despite saying in the tape that she intended to “handle things privately” and “never come forward.”

“Obviously, I know the implications doing what I do, making money the way I do and being an Instagram model, so being tied to a story like this — I know the stereotypes,” she added.