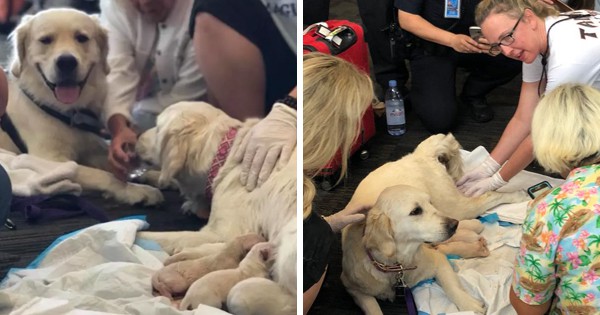 Ellie was travelling home with her puppy daddy, Golden Nugget, and their owner, Diane Van Atter. The three were waiting to board a flight to Philadelphia.

Flying with dogs part 2. Again, minding my own business, sitting in the terminal at my gate, and this proud Momma decided to have her babies at the Tamp International Airport, gate F80!

The pregnant labrador wasn’t due for a few more days, but her puppies had other plans. Luckily, paramedics from Tampa Fire Rescue were on site and were able to help Ellie deliver eight beautiful puppies—seven very good girls and one very good boy.

Ellie, Golden, and Diane missed their flight home. For the next three hours, travelers in the airport came up to congratulate Ellie and of course to fawn over the cute little pups.

One of the passengers who witnessed the birth noted that Ellie’s man, Golden Nugget, was right by her side. Apparently, the puppy papa seemed almost as nervous as the mother!

Congratulations to Ellie and Golden! And happy birthday, puppies!