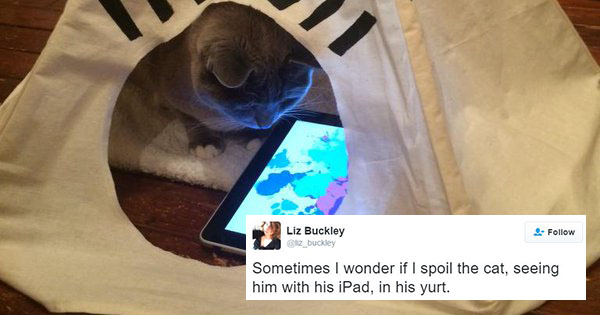 BATMAN: I got you flowers
CATWOMAN: Put them in this vase
BATMAN: Ok
CATWOMAN: *pushes vase off counter while maintaining eye contact*

I had every intention of doing laundry but my cat seriously bullied me into cuddling with her. Who owns who?

*on phone* Sure I can come over! Let me–

Cat curled up on my lap: *makes throat slice gesture with claw*

No nvm, I'm just going to stay in

Cat just chilling in Brockley Sainsbury's. Security tried to remove him. He sauntered straight back in. pic.twitter.com/MotEBFuzKr

Me: *Sobbing* One minute he loves me and the next he wants nothing to do me!

— said Drumpf at the restaurant & everybody clapped (@AbrasiveGhost) April 26, 2015

For my cat's birthday I'm covering my coffee table with change, bottle caps, pens & gum wrappers so he can just knock it all onto the floor.

Sometimes I wonder if I spoil the cat, seeing him with his iPad, in his yurt. pic.twitter.com/45ScY3Rloe

Saying "Bless You" out loud when my cat sneezes makes me

Hey sorry I'm late, I had to hold my cat like a baby.

Sorry I didn't pick up when you called, I was reenacting funny Broad City bits for my cat

Me: *says we should not be slaves to the economy *
Also me: *bought a heart bowl and chicken sticks for my cat's birthday *