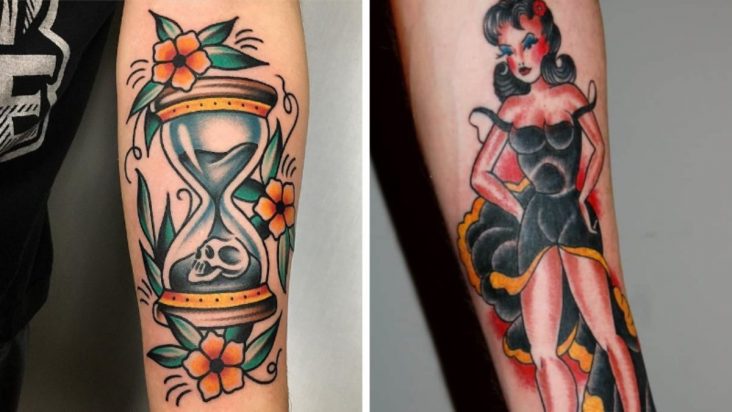 American Traditional tattoos are a time-honored tradition, dating back to the early 1900s. They are known for their strong lines, bold colors, and solid shapes. You can tell American Tradition by its clean, traditional design with minimal shading or lining.

Old school American traditional tattoos have many qualities that make them appealing to the creative community. They’re also more fitting with older art styles, giving them an aged look that most artists love.

The Eagle is a bold and imposing design that represents courage, strength, and freedom. If this tattoo speaks to you, make sure it fits your other tattoos’ colors to create balance! The many different varieties of eagles also give you a multitude of options to choose from.

The Tiger Tattoo has many meanings, but it’s most closely associated with strength and courage. Tigers are also symbols of freedom, trustworthiness, wisdom, and leadership. In American culture, the tiger represents the need to be constantly aware of our surroundings. It is another symbol of power and strength that goes back centuries.

The Snake is one of the oldest and most powerful mythological symbols in history. Due to its many meanings, it’s also a popular tattoo idea for both men and women alike. The snake can represent wisdom, good luck, fertility, rebirth, resurrection, transformation, protection against evil spirits, and even deceit (how snakes camouflage themselves).

The Lion is an ancient and noble animal that represents power, valor, and royalty. It’s a symbol of pride and authority. In some cultures, the lion can also represent wisdom and strength in battle. Among Native Americans, the lion is a symbol of courage and fearlessness.

The Octopus is a perfect tattoo idea for those who love the ocean and aquatic life. It’s an important symbol in many cultures, representing strength, mystery, and unpredictability. The octopus also has ties with fertility and sexual potency — making it a popular choice for women and men!

Cats are symbols of independence, freedom, and grace. The Cat is also associated with feminine energy, beauty, mystery, the moon, and witchcraft. This tattoo design represents a woman who is confident, strong, and independent.

The Wolf is a symbol of intelligence, strength, protection, and family. It’s also associated with the moon and femininity. Wolves are known for their social behavior and pack mentality, so this tattoo design is perfect for anyone who wants to show off their close-knit ties with friends or family members.

The Swallow tattoo is a popular design concept for both men and women. The swallow has different meanings worldwide, but it’s most commonly associated with love and loyalty. The Swallow symbolizes happiness, freedom, and friendship.

The Bear is a symbol of strength, power, virility, and loyalty. It’s also associated with courage and wisdom (due to its strong sense of smell). Among Native Americans, the bear was seen as a guardian that protected people in their dreams. This tattoo represents a person who is strong and loyal.

Deer are symbols of grace and beauty. They’re also associated with independence, gentleness, and femininity. Within Native American culture, the deer is associated with the soul and healing. The stag was also a symbol of sexual potency and was a favorite design among men.

The skull is a wonderful idea for anyone who wants a tattoo design with hidden meanings. Skulls are associated with death and rebirth, so this tattoo will remind you to live every day to the fullest. The skull represents undying love for life and freedom from inhibitions.

The Hourglass is a symbol of time and mortality. It represents the brevity of life and ties into the concept that we’re all in this together. When two hourglasses are used in tattoo designs, it’s meant to represent your love for someone else who shares your same fate.

This tattoo design represents those who are strong-willed, determined to achieve their goals, and aren’t afraid to take the lead! The arrow is a symbol of direction and focus. It also represents masculine energy, virility, strength, and power.

The Anchor is a symbol of hope, stability, and protection. It’s often associated with sailors and their families. The anchor embodies the belief that someone will always be there to help you when you’re in need. This tattoo represents a person who is reliable and trustworthy.

The heart is a universal symbol of love, loyalty, passion, and friendship. It’s no wonder this tattoo idea is one of the most popular choices for women. The heart design represents an individual who is loving, giving, and generous.

A Compass symbolizes direction and guidance. It’s associated with protection, masculinity, traveling, and the journey of life. This tattoo represents someone secure in themselves and their plans. It symbolizes a person who believes that “home is where the heart is.”

The Ship is a symbol of travel, exploration, and arriving at your destination. It’s associated with masculine energy and the protective qualities of Mother Nature. This tattoo design represents someone who is in touch with their inner adventurer. For many, it is a symbol of fearlessness and confidence.

The gentle and beautiful butterfly is a symbol of transformation and spiritual growth. It’s associated with feminine energy, gentleness, beauty, and lightness of being. The butterfly tattoo design represents someone who is both delicate and dependable. It also represents an individual who has gone through life changes and stood strong during difficult times.

Bees are symbols of hard work, dedication, and productivity. They represent perseverance, leadership skills, and strength through team effort. This tattoo represents anyone who knows how to get down to business and can always be counted on in a crisis.

Is there anything more feminine than a flower tattoo? For thousands of years, flowers have been associated with feminine energy. The flower tattoo design is a popular choice for women who are classy, soft-spoken, and kind. If you notice the specific type of flower in your tattoo design, it may represent something more specific about yourself or someone close to you.

A Portrait Tattoo is a great way to celebrate someone’s life and memory. This person means so much to the individual wearing the tattoo. It can be a parent, a sibling, a child or a first love. This person is so special that the wearer wants his or her image etched forever.

The Diving Girl tattoo design is a symbol of excitement and exploration. This tattoo is associated with travel and new experiences. For women, it’s often used to express their inner adventurousness to explore the world around them. For men, getting this tattoo represents their love for someone who savors every experience life has to offer.

Pin-Ups are retro images of women or girls used to decorate military planes and tanks during World War II. These designs represent the classic image of femininity, sexiness, and strength. Tattooing popular pinup imagery on the body is now a trendy modern tattoo design.

The Gypsy Girl symbolizes freedom, independence, and a nomadic lifestyle. It’s associated with feminine energy and intuition. It’s also a colorful and bold design that can be drawn large or small on any body part. This tattoo represents a carefree and independent attitude, and also someone who believes in listening to their heart when making life decisions.

A Religious Tattoo can be associated with any number of the world’s religions, but it is most often connected to Catholicism. The tattoo design represents someone devout in their beliefs and follows the teachings of their faith. This tattoo symbolizes an individual who loves unconditionally and has a deep connection to spirituality.

The Circus is all about color and movement. It’s the place where dreams come true, and anything is possible. This individual isn’t afraid of trying new things and embarking on new adventures! The circus tattoo design represents someone fun, free-spirited, and who enjoys life to the fullest.

Tattoos with elaborate or fancy lettering represent the wordsmith. The tattoo design symbolizes skilled communicators both in writing and speaking. At the same time, it can also represent a quote, a famous line, or a meaningful phrase in the person’s life.

The Hot Air Balloon is another symbol of adventure. It represents the explorer within us all who wants to soar above it all and see everything! This fun, colorful design symbolizes an individual who is positive, creative, and full of life!

The Cactus is a rugged and tough plant. It’s so resilient that it can even grow in the desert. This tattoo design represents someone who doesn’t sweat the small stuff and is always ready for anything that comes her way. The cactus symbolizes a person who loves challenges and thrives on overcoming obstacles to achieve their goals.

The Sun and Palm Tree is the perfect design for people who want to be rejuvenated by the warm sun every day. It symbolizes someone who loves warmth, summertime, and spending time outside. Although it’s a simple design, it can also be drawn large or small on any area of the body.

What are American Traditional tattoos?

What are the subjects of American Traditional tattoos?

Many classic tattoo designs have their origins in American history, especially during the early 20th century. The subjects of these designs vary greatly, but they typically feature bold lines and bright colors with standard lettering.

Are all American Traditional tattoos done in black?

Why are traditional American tattoos making a comeback?

Over the past few years, there has been a resurgence of interest in traditional American tattoos. This is partly due to tattooers looking for new styles that fit their skill set and attract a wide variety of clients.

Why should I get an American Traditional tattoo?

If you want a tattoo that is bold, bright, and easy to read but also has an old-school vibe, then you might consider getting a traditional American tattoo. These tattoos are perfect for those who love vintage designs or images with a deep personal meaning behind them.