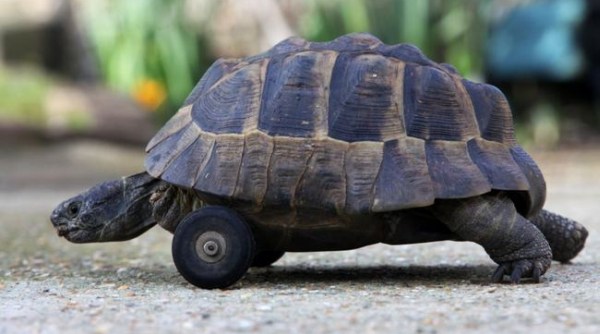 It’s not only humans that have been given a new lease of life with prosthetic limbs. Cats, dogs, elephants, and even turtles are among the many animals to benefit from this amazing technology. Here are some heart-warming case examples: 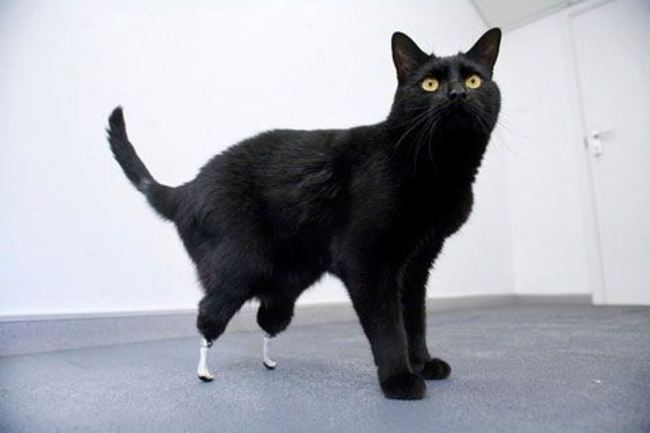 Two-year-old Oscar was fitted with two new delicate-looking hind legs after he had his own brutally severed by a combine harvester. Veterinarian Noel Fitzpatrick and the University College London teamed up to give this lucky guys a new lease of life. One down, eight to go. 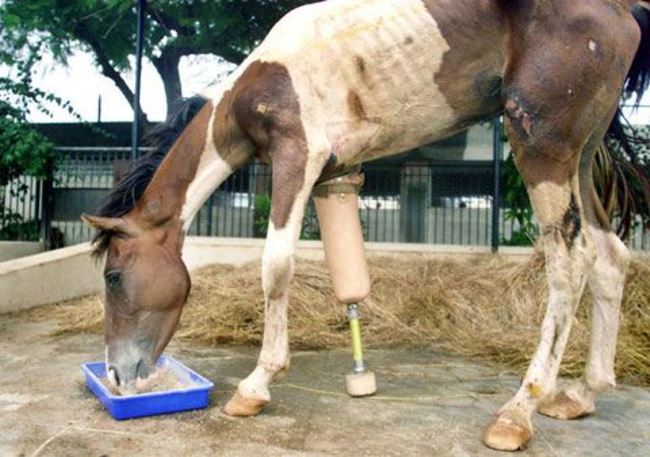 Macho was malnourished and badly injured when he was found on the side of a road in India. With his artificial leg in place, he might not be able gallop like he used to, but at least he is mobile.

The Eyes of Thailand via naturely.org

In 1999, tragedy struck Motala when she stepped on a landmine from the Burmese-Thai war. It severed her leg so badly that she had to have it amputated. In 2009, the technology was finally available for the fifty-year-old pachyderm to have her first permanent prosthetic leg. She was the first to have one, and certainly won’t be the last. 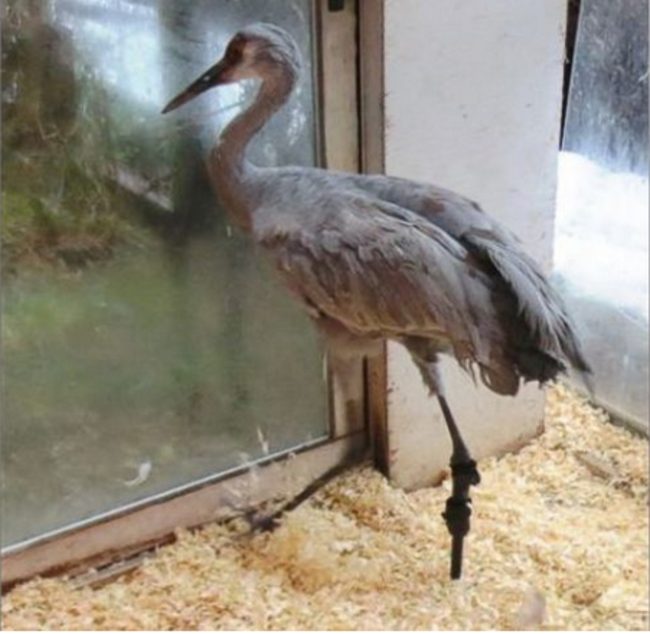 Bunker’s leg was hit by a ball on a golf course, which left it completely destroyed. After a first unsuccessful temporary prosthetic leg, Bunker received a more permanent solution from Orthopets in Denver, Colorado. The leg works so well that there is hope of releasing him back into the wild with a tracker to monitor his progress. 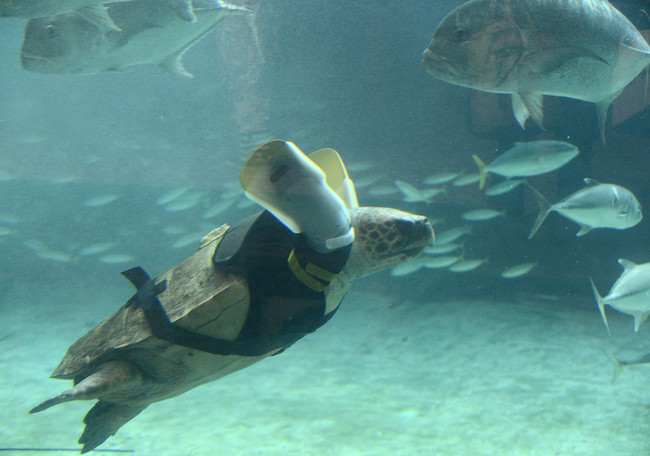 Fishing nets are a death sentence for marine life. Except Yu Chan that is. When she was pulled from the sea it was clear that she had been the victim of a shark attack: She was missing half of one flipper and a third of another. The beautiful loggerhead turtle went through many pairs of prosthetic flippers before getting kitted out with a comfortable vest created by Kawamura Gishi. She now lives a happy life at the Suma Aqualife Park in Japan. 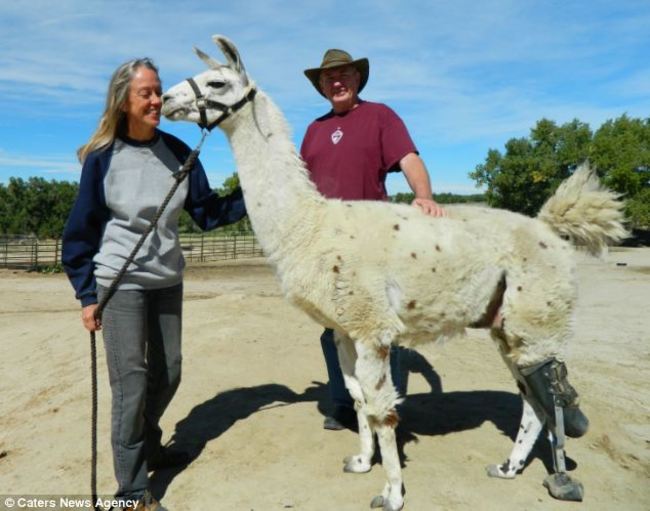 Tripod was first spotted by Sherry Hughes and Marc Field on their ranch in Denver. What caught their attention was his injured leg which was clearly in need of amputation. The two adopted the llama, and soon raised enough money to give Tripod a prosthetic leg from Orthopets. 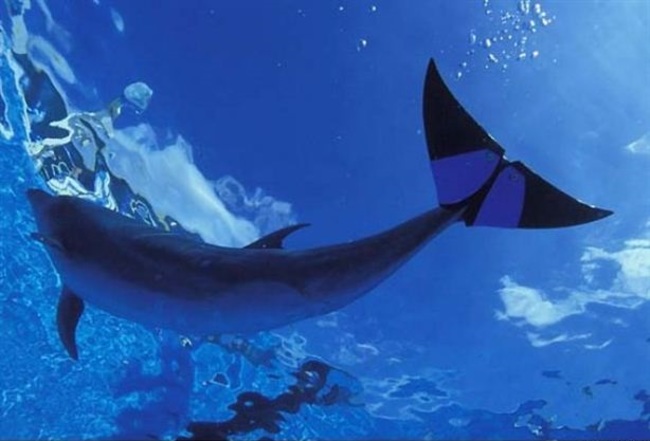 Fuji suffered from a mysterious disease that meant a large chunk of her tail had to be amputated. A veterinarian at her home in Japan enlisted the help of Bridgestone Corp., and soon, the thirty-four-year-old had a full tail made of the same material you find on Formula One tires. Although Fuji only uses the fin for about twenty minutes per day for practical and safety reasons, she is a much happier dolphin now she has a normal looking tail. 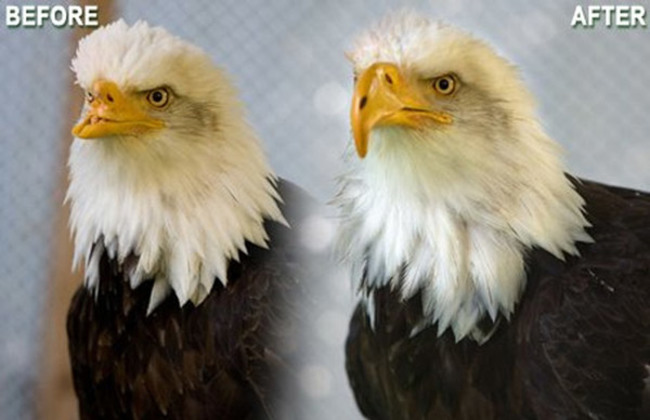 Poachers were nearly the end for Beauty. She was lucky she was rescued — the top half of her beak was gone, leaving her incapable of eating, drinking or cleaning herself. Her rescuer enlisted the help of the Kinetic Engineering Group, which constructed a 3-D printed beak for the eagle. Beauty had a happy ending: She can now finally take care of herself and be a normal eagle. 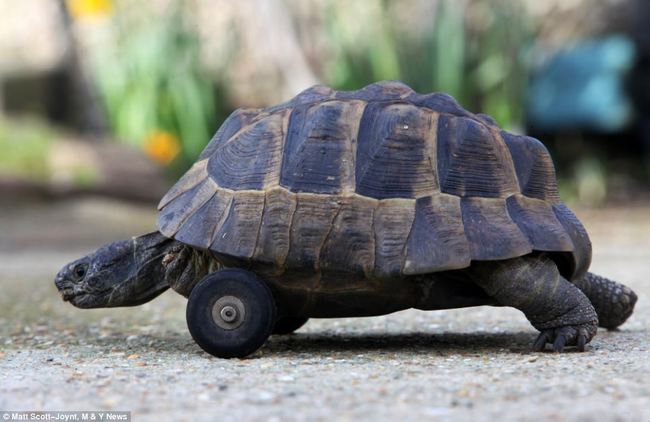 Septimus is what we call a heavy sleeper. He was hibernating so deeply that he didn’t feel the rats gnawing off his front legs. When Darren Strand found him under his porch, he took him to the veterinarian. What remained of Septimus’ legs were infested with maggots, which left only two options: amputation or euthanasia. Darren and his daughter chose the latter. The 23-year-old tortoise was given an operation which attached model airplane wheels to his front end. Septimus is now the speediest tortoise in the world! 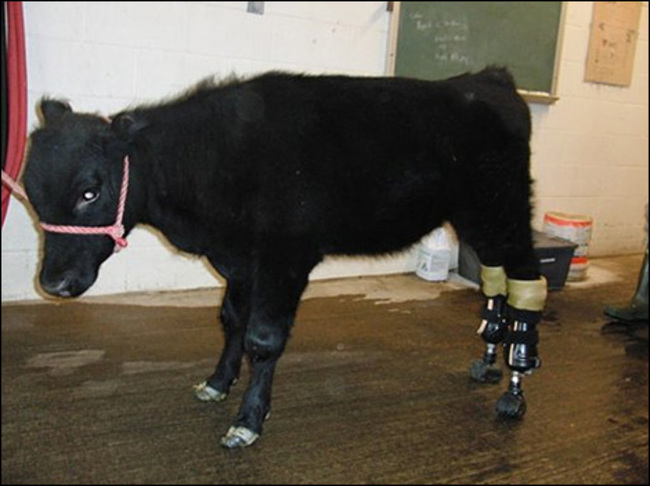 Meadow was found with severe frostbite on her hind legs and ears. Her saviour Nancy Dickenson spent thousands of dollars to give her prosthetic hind legs. This shocked Colorado State veterinarian Dr. Robert Callan, who had never heard of a cow being given with artificial limbs — as the cost doesn’t justify the price of their beef. Luckily for Meadow, Nancy considers her part of the family. 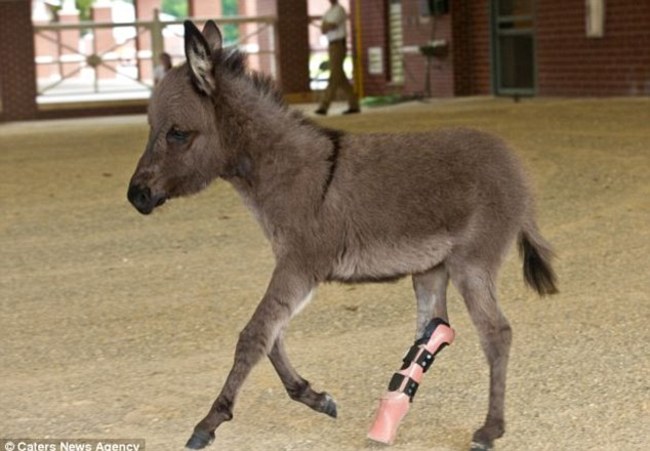 Emma was born with a deformity which meant her right hind leg had to be amputated in her very first hours in this world. But all was not lost, as she was given a prosthetic leg in her earliest years. As a result, Emma can now run, buck and kick as well as any other donkey. 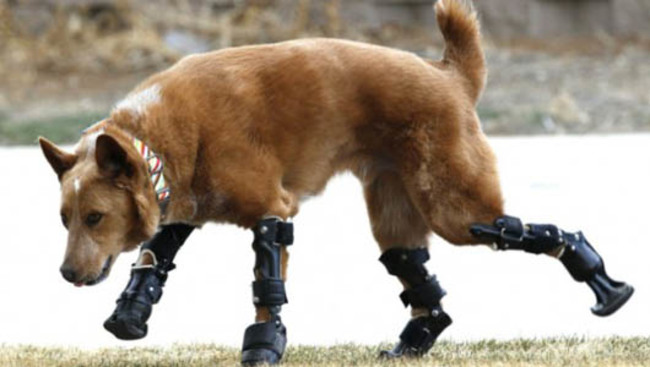 Nakio had a cruel childhood. He was found abandoned in a basement during a brutal Nebraska winter. His tail and all four legs were frozen in a puddle of ice. They all had to go due to frostbite. Veterinary assistant Christie Pace adopted him and raised just enough money to only get him prosthetic hind legs from Orthopets. But he still had some trouble getting around. When Orthopets heard his story, they covered the costs of the other two legs. Nakio can now put his grim past firmly behind him and literally move on. 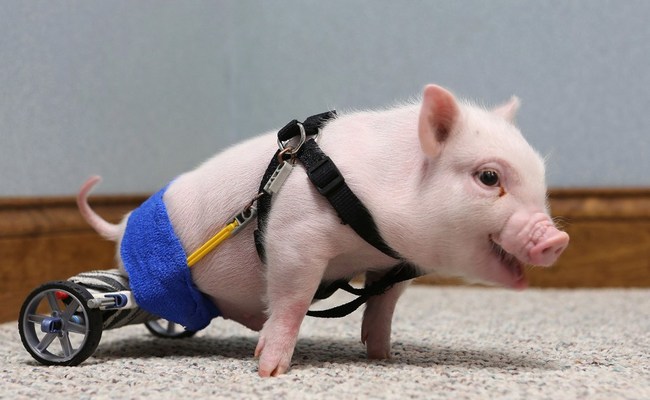 Chris P. is now a star and inspiration. He was born without hind legs, so his owner (and veterinarian), Len Lucero, made the little piggy his own little wheelchair from Kinex toys. Then he put up a video on YouTube. Chris became an overnight star and a hit with the kids. He started making visits to children’s hospitals where he gained a loyal fan base among many of the children who used wheelchairs: Seeing Mr. Bacon on wheels made them feel less alone and gave them the hope they needed to keep going. 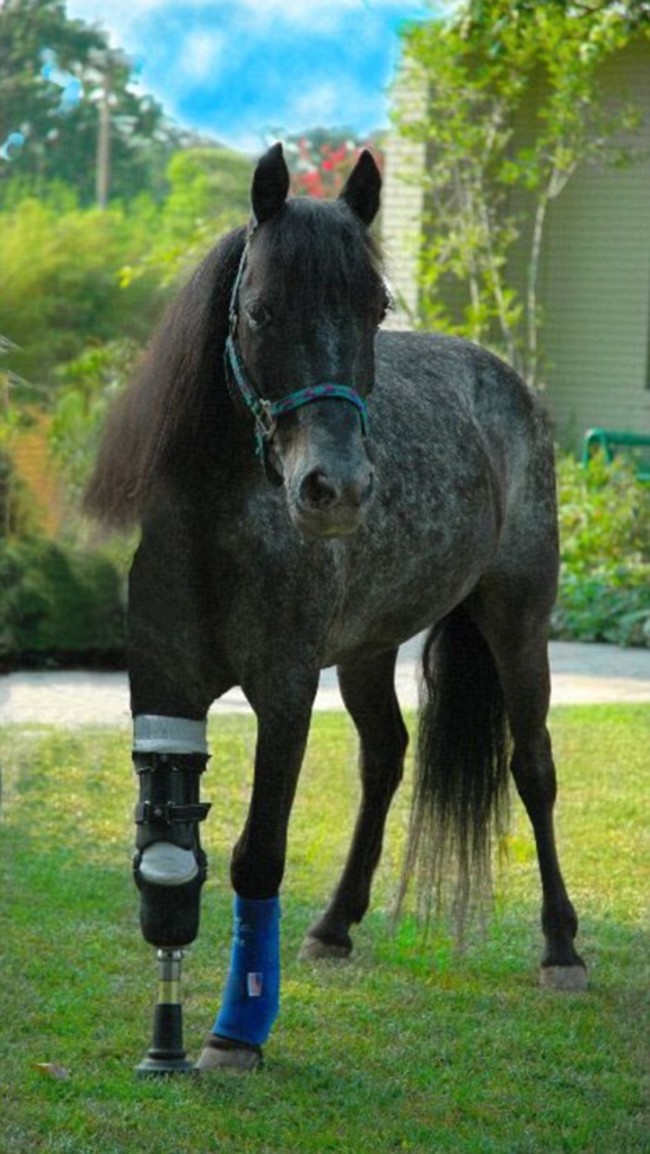 Molly was was attacked by a dog shortly after hurricane Katrina, which resulted in a mangled and infected front leg. She seemed destined for euthanasia. But because Molly was so careful with her injury, surgeon Rustin Moore refused to give up on her. He amputated her leg and gave her a prosthesis. Molly became a symbol of hope in New Orleans, and she began traveling to hospitals, nursing homes, and rehabilitation centers to give to hope to others and show that with the right attitude, you can overcome anything. 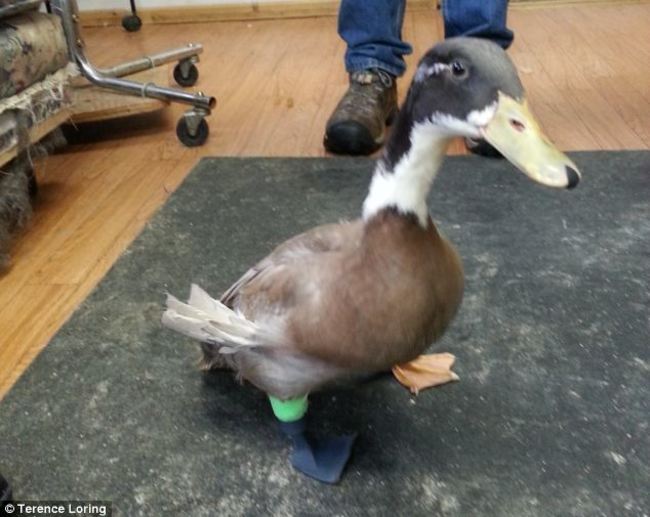 Dudley was just a duckling when he was attacked by aggressive chickens and lost his leg. He could still swim, but had trouble waddling around on land. Mechanical engineer Terence Loring teamed up with 3-D printing company Proto3000 to help build Dudley an artificial leg. Thanks to 3-D printing technology, printing out new legs is easy as the duck grows. Loring even put the files online, available to download free of charge.