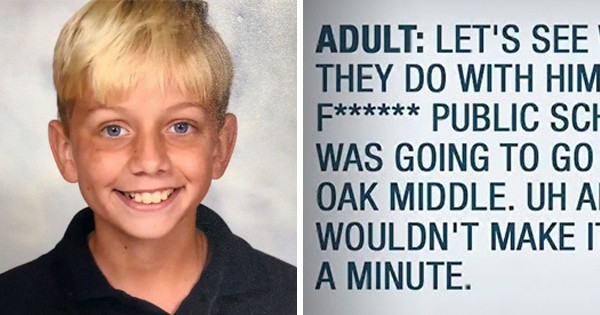 12-year-old Camden from Louisiana was a student at Hope Academy, a special school for kids with autism. Camden’s mother Milissa wanted him to have a supportive and understanding environment where he could learn at his own pace. Understandably, she felt extremely lucky when her son was accepted by the school, which is known for giving students like him the extra care they need. Over a few days though, she noticed that the usually cheerful and happy Camden was bothered. He got aggressive, and would frequently wet the bed. Milissa tried talking to the school board, but they assured her that Camden was being taken care of.

Desperate to find out what was bothering her son, she came up with a plan.

Milissa hid a recording device in Camden’s backpack, and what she heard shocked her.

WATCH: Tonight the mother of a special needs student who was mocked by his teachers is thanking Baton Rouge and the rest of the nation for standing behind her son: "It would just make his day to know that this many people cared about him."FULL STORY: http://www.wbrz.com/news/second-teacher-fired-after-school-staff-caught-mocking-autistic-child-in-audio-recording

The next day, she brought the recordings to the school board. Hope Academy’s principal, Linda Stone, fired the two teachers heard in the recordings. Mrs. Stone released a statement about the incident:

On March 23, 2018, a recording posted to social media was brought to our attention. Apparently, a parent sent a student to school with a recording device in his/her backpack. The recording appears to be a compilation of audio clips, many of which involve private conversations between two adults with no other persons/children present. The recording contains regretful conversations between these adults.
The parent never brought the recording to the attention of Hope Academy before posting it on social media. The parent has also refused to meet with Hope Academy to discuss the actions we have taken to address the issue. The persons involved in the communications are either no longer with the school or will no longer be with the school after this semester.
Over these many years, Hope Academy has built a strong reputation for competently serving the educational needs of the special needs community. These recordings are not an indication of who we are. We ask that the community not let the actions of two persons reflect on the reputation of and the mission of our school-a mission we have tried so hard to build. We again extend an invitation to meet with the parent involved to discuss this incident further.

Milissa has since pulled Camden out of Hope Academy and is seeking legal advice.