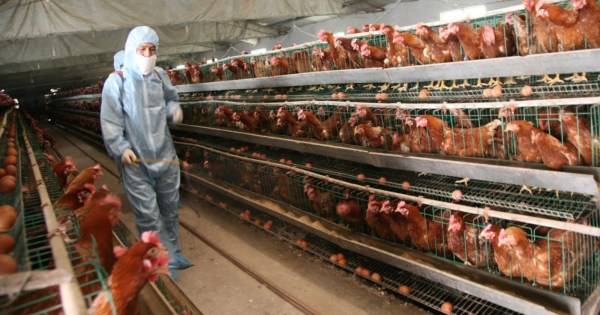 These chemicals and drugs allowed in US foods and agriculture are banned in Europe. But while the European authorities have outlawed many of these practices, such as the use of ‘Altrazine’ herbicide and Arsenic in animal feed, the same measures have not been taken in the USA, largely thanks to the power of the food industry in protecting its own interests.

Here are the 9 practices that are officially banned in europe – how many of these were you aware of?

Banned in Europe in 2003, Syngenta’s weed killer Atrazine is a potent endocrine disruptor that, according to UC Berkeley Professor Tyrone Hayes, “chemically castrates and feminizes wildlife and reduces immune function in both wildlife and laboratory rodents.” The chemical has also been found to induce breast and prostate cancer, retard mammary development and induce abortion in lab animals, with studies in humans suggesting similar risks. In the US, Atrazine is widely used and has become a common drinking water contaminant.

Arsenic-based drugs are approved for use in animal feed in the US because they make animals grow quicker and make the meat appear pinker (i.e. “fresher”). The US Food and Drug Administration (FDA) has stated these products are safe because they contain organic arsenic, which is less toxic than the other inorganic form, which is a known carcinogen.

The problem is, scientific reports surfaced stating that the organic arsenic could transform into inorganic arsenic, which has been found in elevated levels in supermarket chickens. In 2011, Pfizer announced it would voluntarily stop marketing its arsenic-based feed additive Roxarsone, but there are still several others on the market. In the European Union, meanwhile, arsenic-based compounds have never been approved as safe for animal feed.

Chicken litter, a rendered down mix of chicken manure, dead chickens, feathers and spilled feed, is marketed as a cheap feed product for cows. The beef industry likes it because it’s even cheaper than corn and soy, so an estimated 2 BILLION pounds are purchased each year in the US. However, any cow that eats chicken litter may also be consuming various beef products intended for chickens – raising concerns about Mad Cow Disease. In the US, the use of poultry litter in cow feed is unrestricted. Europe banned all forms of animal protein, including chicken litter, in cow feed in 2001.

The US Department of Agriculture (USDA) is rolling out new rules that would permit poultry producers to put all the poultry through an antimicrobial wash, using chlorine and other chemicals to kill pathogens. We already have a problem with antibiotics causing antibiotic-resistant “super germs” when used in animal feed, and this could likely make the problem even worse.

Workers in the plants have also reported health problems from the chemical washes, including asthma and other respiratory problems. In the European Union, the use of chlorine washes is not only banned, but they won’t even accept US poultry that’s been treated with these antimicrobial sprays.

Agricultural use accounts for about 80 percent of all antibiotic use in the US. Animals are often fed antibiotics at low doses for disease prevention and growth promotion, and those antibiotics are transferred to you via meat, and even via the manure used as crop fertilizer. Feeding livestock continuous, low-dose antibiotics creates a perfect storm for widespread antibiotic-resistant disease proliferation. The FDA has long held that administering low doses of antibiotics to livestock was inappropriate, yet they continue to allow its use. In Europe, all antibiotics used in human medicine are banned in agriculture, and no antibiotics can be used for growth-promoting purposes.

#6. Ractopomine and Other Pharmaceutical Growth Enhancers in Animal Feed

Ractopamine is banned in 160 countries, including Europe, Taiwan and China. If imported meat is found to contain traces of the drug, it is turned away, while fines and imprisonment result for its use in banned countries. Yet, in the United States an estimated 60-80 percent of pigs, 30 percent of ration-fed cattle, and an unknown percentage of turkeys are pumped full of this drug in the days leading up to slaughter because it increases protein synthesis, making the animals more muscular. While Europe has remained steadfast on its Ractopamine ban, including refusing imported meat treated with it, the US is actively trying to get other nations to change their minds and accept Ractopamine-treated pork.

Gestation crates are two-foot-wide cages where breeding pigs spend nearly their entire lives, unable to even turn around. Commonly used on CAFOs, the crates are the definition of inhumane and cause severe stress to the animals, who in some cases will resort to chewing the bars of the cages incessantly, causing them become covered in blood. While several US pork producers, including Smithfield, Cargill and Hormel, have pledged to phase the crates out, and fast-food chains including McDonald’s, Burger King, Wendy’s and Subway have promised to stop buying from pork producers who use them, the practice remains widespread in the US. Europe, however, banned gestation crates entirely, effective this year.

Many do not realize that fluoride is a drug that is available only with a prescription. Yet it’s added to municipal water supplies used by more than 180 million Americans, including infants and the elderly without any attention to personalized dosing or potential interactions. Swallowing fluoride has been shown to cause weakened bones, bone cancer, hyperactivity and/or lethargy, decreased thyroid function, decreased IQ, dementia, kidney issues, arthritis and more, while studies have failed to show benefits for preventing cavities when taken internally. Cities around the US spend millions adding fluoride to communal water supplies each year, yet most European countries do not fluoridate their water.

The European Union has historically taken a strict, cautious stance regarding GM crops, much to the chagrin of biotech giant Monsanto and in stark contrast to the US. For instance, while GM crops are banned in several European countries, and all genetically modified foods and ingredients have to be labeled, the US has recently begun passing legislation that protects the use of GM seeds and allows for unabated expansion, in addition to the fact that GM ingredients do not have to be labeled. Virtually all of the claims of benefit of GM crops – increased yields, more food production, controlled pests and weeds, reductions in chemical use in agriculture, drought-tolerant seeds – have not materialized while evidence pointing to their serious risks for human health and the environment continues to grow.

If you want to avoid these questionable ingredients, additives and unethical practice and you live in the US, ditching processed foods entirely is the best option.