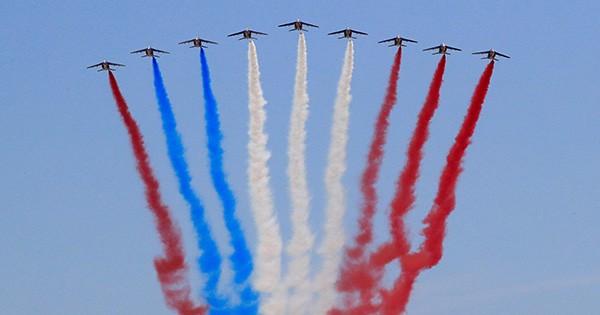 Hundreds of people took to the streets to celebrate Bastille day on Saturday. But the grandiose parade kicked off on the wrong foot when the French Air Force mixed up the colors of the French flag.

As celebrations ensued, nine Alpha Jets soared into the sky bearing France’s colors. They were supposed to fly over Paris and release tri-colored smoke in red, white, and blue.

But one of the aircrafts was spewing the wrong color. The first aircraft which was supposed to leave a trail of blue smoke, used red instead. This created a lopsided flag of red, blue, white, and red again.

The error wasn’t left unnoticed when Twitter users pointed out the mistake.

This wasn’t the only blunder that happened during the celebrations. During the parade in Paris, two police motorcycles collided with one another in front of distinguished guests and President Emmanuel Macron.

The two officers from the Republican Guard were tracing patterns on the ground as part of a demonstration. After colliding, the two bikers immediately fixed their vehicles and resumed formation. One of the drivers miscalculated the entry thus causing him to bump into the other driver.

Though a couple of errors happened during Bastille day, the festivities continued throughout the weekend as France celebrated both Bastille Day and their championship win during the 2018 FIFA World Cup. It just goes to show that a few errors doesn’t stop the French from partying!