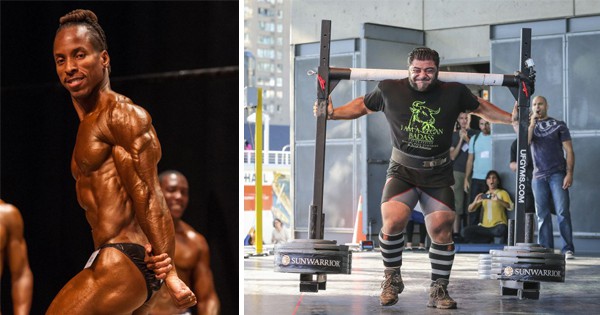 When it comes to bodybuilding, there are two main components that turn your average gym rat into Ahnuld: hard work and food.

The body doesn’t differentiate between animal protein and plant protein — and there’s more than enough protein in lentils, quinoa, oats, rice, moringa and beans to ensure that, as long as you’re paying attention to what you eat, not a single gram of animal needs to get into your gut. And these guys are out to prove it.

Vegetarian for a decade, and vegan for four years, German-Armenian Patrik Baboumian is probably Europe’s strongest man — if not the strongest man in the world. His most incredible feat of strength while vegan is a 555 kilogram (1223.5 pounds) yoke walk — the heaviest ever done. According to the man himself, going vegan had a tremendous positive effect on his performance. He says: “The strongest animals are herbivores: gorillas, cattle, elephants and me.”

Brothers Jon and Sergi are Brazilians on “The Quest For Fitness” — and they’ve been doing it completely vegan. When Sergi first turned vegan, brother Jon’s opinion on the matter was: “Animals were put here for a reason right? You have to eat them. I’m a bodybuilder, I’m a fitness guy, I’m gonna eat meat I don’t give a $#%! what you say, and it’s the way that it will always be so get the %^*& out of here.” His opinion remained largely the same for another year or so, although he eventually began cutting down on meat after his brother showed him several health documentaries. Then Jon decided to do further research into the ethical side of veganism and discovered how animals were treated in the livestock industry, and he hasn’t looked back since.

One of the most popular personalities in the bodyweight training world, vegan Frank Medrano practically defies gravity when he’s on the bar. Inspired by calisthenics videos on YouTube, Frank started getting into calisthenics a decade ago, but it wasn’t until four years ago that he became vegan after discovering that two of his bodybuilding pals were getting good results on a plant-based diet. After experiencing faster recovery times and what he called “super wellness” without a dent in performance, he decided to stick with it.

Known as “Tha Vegan Dread”, Torre Washington is a born vegetarian and long-time vegan. He’s most active on his Instagram account, where he has over 21,000 followers, and a platform for his coaching program. A professional natural bodybuilder, he may not be huge at 5′ 7″ and 175 lbs, but his physique still inspires.

Jim Morris is known for one impressive thing: being relatively old, yet incredibly fit. Despite hitting his 80s, he’s continuously defied age by keeping his body competition-ready for most of his life. Vegetarian since 1985, he went permanently vegan in 2000 after discovering “The China Study”, a book authored by T Colin Campbell about correlations between meat and cancer, which struck a cord with him as he searched for a way to maintain his health and fitness for both strength and longevity. His last competition was in 1996, where he won the “over 60” category of the Masters Olympia.

Known as conscious_muscle on Instagram, Jordan makes it a point to live up to his name. Although not a professional bodybuilder, he’s a coach and proof that getting beefy doesn’t require beef. In one video at the Hippocrates Health Institute, he explains how, simply put, protein is protein — so long as you get a complete amino acid profile, your body doesn’t care whether you had to kill for it or not. Which poses the question, why kill?

Slovakian by birth, and Mr New Zealand thrice, long-time bodybuilder Dusan Dudas is another testament to the idea that getting old on a diet of veg ain’t all that bad. Forced into veganism after a sudden onset of heart problems, he’s since been on a mission to prove that a plant-based diet is the way to go, both for fitness and for health.

The founder of veganbodybuilding.com, Robert Cheeke has been vegan since he was 15. An endurance athlete at school, he picked up bodybuilding after college and immediately loved it. Although a bodybuilder, his bigger feats are in the vegan community itself, where he’s been advocating veganism on and off the road, traveling 250 days out of the year in 2011.

The 55-year-old weightlifter has been vegan for nearly three decades, and for ethical reasons. He discovered fitness after being embarrassed at gym class. He was more of a “chubby bookworm” than an athlete, unable to do what other, fitter kids could do. The embarrassment led him to take up Judo and cycling — and he’s gotten stronger and bigger since, discovering weightlifting at the age of 17.

Former elementary schoolteacher-turned-bodybuilder Chad Byers believes that you “cannot out-train a bad diet.” He went vegan for the health benefits, and combined his love of sports with weightlifting to quit his former job and open a fitness studio. Winning first place as a Fit Model at the Naturally Fit Super Show in 2012, he’s since focused on his work at the studio, and has a growing community of vegan patrons.

Pushing for vegan fitness in Italy, Massimo Brunaccioni loves two things: lifting weights and sprinting. His mother has been vegetarian for over two decades and vegan for four years, and he credits her and the family dog for his dedication towards veganism. However, like most of the people on this list, his love for fitness came first. For nearly half his 30 years, he’s been weightlifting and training for strength and size — but it was the push towards a plant-based diet that gave him a reason to advocate his love for health.

With a Bachelor of Science degree in biology and an enthusiasm for veganism, Derek Tresize — self-dubbed a “vegangelist” — has been vegan for nearly a decade. While agreeing that bodybuilding is an inefficient and possibly dangerous way to treat the body, he says he does it for awareness and fun. “It gets people’s attention. If you’re a big, muscular guy and you say, ‘Hey, I eat this diet,’ people are going to pay more attention to me than say, a scrawny, pale ‘land vegan.'”

So there you have it, proof that you can be healthy and strong without animal products. Or steroids.