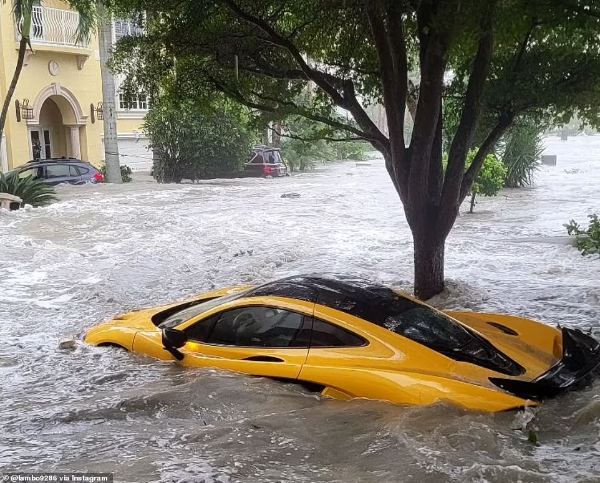 As Hurricane Ian continues to batter Florida, a brand new McLaren P1 worth over $1 million is washed down the street in Naples by flood waters.

For the past 24 hours, the giant storm has ravaged the state, leaving a path of catastrophic ruin.

Authorities in Florida have warned that fatalities will number in the “hundreds” as dozens of people remain stuck on the roofs of their flooded homes, and 2.5 million people are without electricity.

Ernie, a Florida guy hit by the hurricane, uploaded footage of his tragic loss as his just acquired McLaren P1 was overwhelmed in flood waters, washed out of his garage and down the mansion-lined street that now resembled a roaring river.

The auto fanatic appears to have a fleet of premium vehicles, which he often displays on his Instagram account.

However, the McLaren P1 has dominated Ernie’s last 12 postings, with the first beginning a week ago when he noted that the car had only 300 miles on it. When it appeared on the market, it was reputedly priced at more than $1 million.

Ernie uploaded photographs of his hurricane-ravaged Naples neighborhood on Wednesday evening, where streets had turned into rivers. His garage, which held the McLaren P1 and Rolls Royce, was flooded, and both automobiles were buried in water.

Only the top of the brilliant yellow McLaren P1 could be seen in his most recent post as it drifted along the street. ‘Car went through the garage,’ he captioned.

His followers sympathized with him and left supportive comments on his comments. Many people reminded him that automobiles could be replaced and sent out positive thoughts and prayers that everyone was safe.

Another wrote: ‘Hope everyone is alright.’

Another user wrote: ‘I’m so sorry… most important that you and your family are safe. Sending prayers.’

Ernie posted other photos and videos to his Instagram stories that showed the devastation to his neighborhood.

Hurricane Ian made landfall as a Category 4 hurricane on Wednesday afternoon, but the National Hurricane Center reduced it to a tropical storm in an early Thursday update.

It is about 35 miles southwest of Cape Canaveral, has a top speed of 65 miles per hour, and is traveling northeast at around 8 miles per hour.

However, it is expected to reach near hurricane status again when it approaches the coast of South Carolina on Friday, which will be its second landfall in the United States.

Experts are estimating the losses to cost up to $260billion, while the clean-up activities are presently unable to get begin as parts of Florida remain flooded.