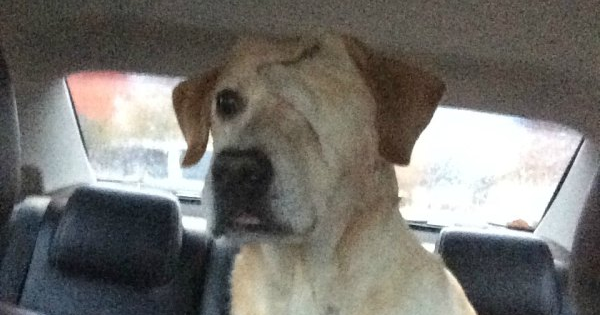 When we first read this emotional story posted to imgur we knew we just had to share it. Some of the pictures are a bit tough to look at, but the little fella pulled through in the end. 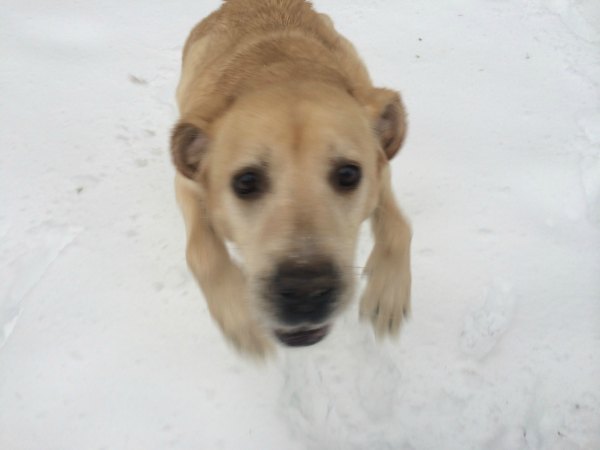 This year my dog Buddy got a nasty invasive tumor on his face, sadly he had to go under the knife and have a big surgery but thankfully with the amazing work of the medical team at the OSU Veterinary School of Oncology he came out on top and has fully recovered.

We got hit with a big snow storm this year, I put this here to show what he looked like before the tumor got big. It’s barely noticeable here, but it’s right above his left eye. At this point it’s a tiny little bump and we didn’t think anything of it. He gets groomed at our vet clinic every month and they didn’t notice anything. 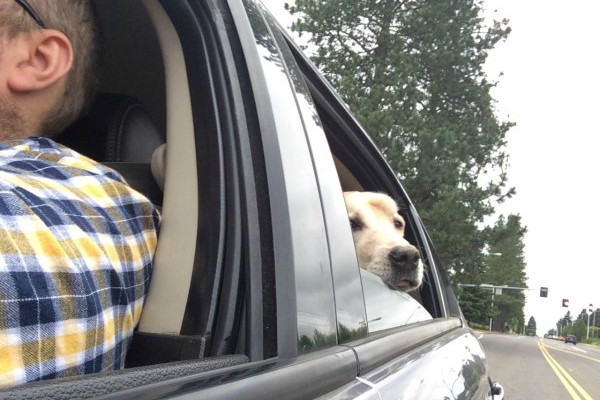 In just a couple of weeks the thing grew in size dramatically (at least double) This is us on our way to OSU for the first diagnosis, our local vet had done test and determined it was indeed some type cancer and needed to call in the big guns to get the final confirmation of WTF it was. This is the last picture I have of him before he went under (probably about a 3 weeks before). Eventually, the tumor got to be bigger than a golf ball and it ended up being an invasive little fucker burrowing into his bone, they determined our only option was to do a major surgery, removing a portion of his skull and scooping it out but sadly Buddy would lose his eye in the process.

This is Buddy two days after his surgery when we went to pick him up. The doctors kinda warned us about how shocking he would appear to us and at first the wife and I were a little jolted, it scared the shit out of my 8 year old daughter too but we got used to it pretty quick. Honestly, it was pretty impressive, the surgeons scooped out a large chunk of his skull, the tumor and everything, then they used flesh from around his neck and looped it over, stitching it shut. When friends asked me what he looked like, I described him as a bad ass post apocalyptic zombie warrior dog. 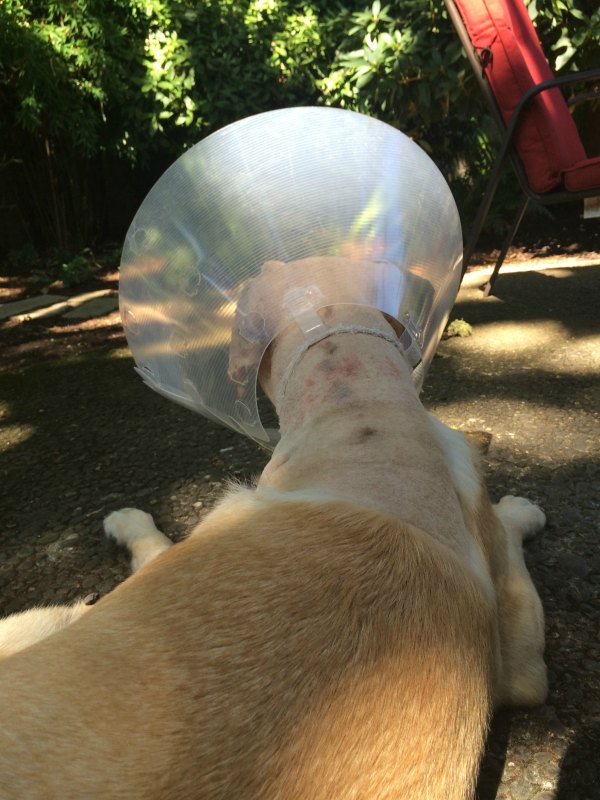 Chillin’ in the back yard, recovering. 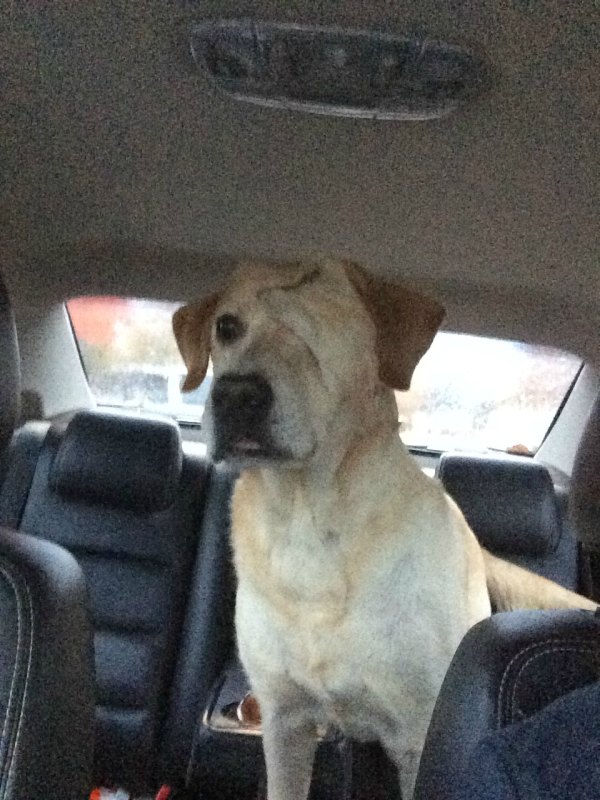 After a clean bill of health, Buddy is 100% recovered, this is him in November. He’s very much the same happy dog and losing the eye has not phased him at all, he has a pretty mean scar but I think it makes him look like a bad ass although he’s just a big ol’ softy. 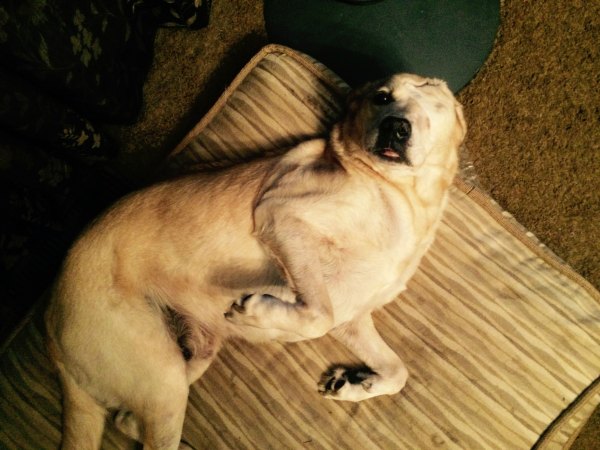 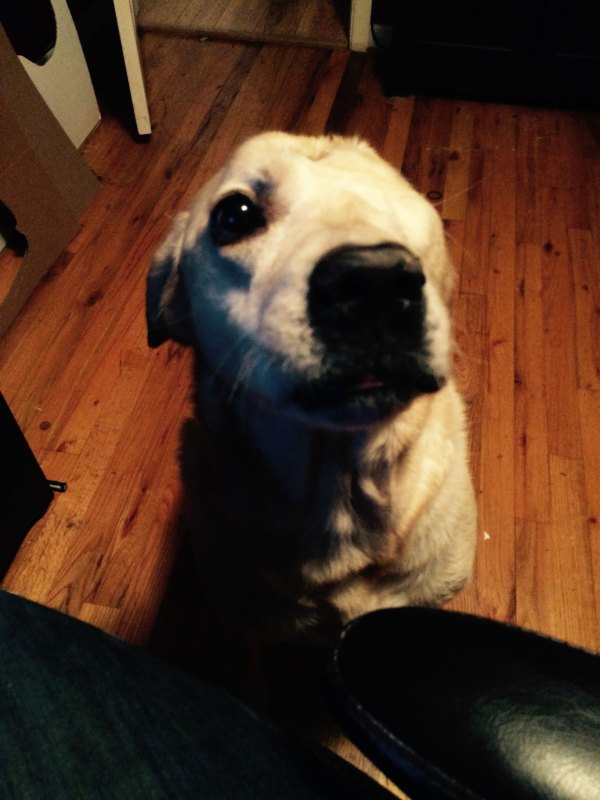 You can’t ask for more than a good dog that never lets anything get in the way of that big smile and wagging tail, even when he was recovering, in pain and on a massive amount of meds, he’d still follow me around the house and flip over for a belly rub. I can’t thank the doctors at OSU (GO BEAVERS!) enough, they really did an amazing job. I know people will probably ask, so I’ll just answer it here, the total surgery cost about $5,000 US. A small price to pay to save a beloved member of our family for the past 7 years if you ask me.