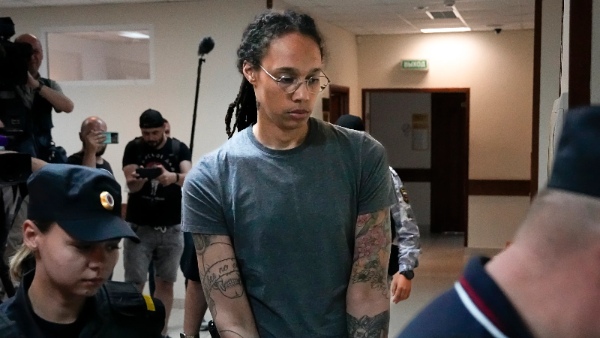 American basketball player Brittney Griner was found guilty of drug possession and smuggling on Thursday and given a nine-year prison term by a judge in Russia.

The time Griner has spent in detention since her arrest in February, according to Judge Anna Sotnikova, will be applied to her sentence.

Griner’s reaction to the statement lacked emotion. She had a blank expression on her face as she listened to the verdict from the defendant’s cage.

The court declared that the 31-year-old Griner brought pharmaceuticals into Russia unlawfully while stating her conclusions on Thursday.

Before the quick decision was made public, Griner submitted one last request to the judge. She said that when she travelled to Moscow in February to play basketball in the city of Yekaterinburg, she had no intention of breaking the law by bringing vape cartridges containing cannabis oil into the nation.

Now the focus is on the potential for a risky prisoner exchange that American Secretary of State Antony Blinken suggested to Sergey Lavrov, the Russian Foreign Minister. Griner and Paul Whelan, an American who is incarcerated in Russia due to an espionage conviction, would be released under the proposed agreement.

Russian authorities have maintained their poker faces over a potential deal and resented American statements regarding the matter, claiming that any negotiations should take place in “quiet diplomacy without releases of speculative information.”

In a statement following the verdict, U.S. President Joe Biden referred to Griner as having been “wrongfully detained,” a phrase that incensed Russian authorities.

“Today, American citizen Brittney Griner received a prison sentence that is one more reminder of what the world already knew: Russia is wrongfully detaining Brittney. It’s unacceptable, and I call on Russia to release her immediately so she can be with her wife, loved ones, friends, and teammates,” Biden said.