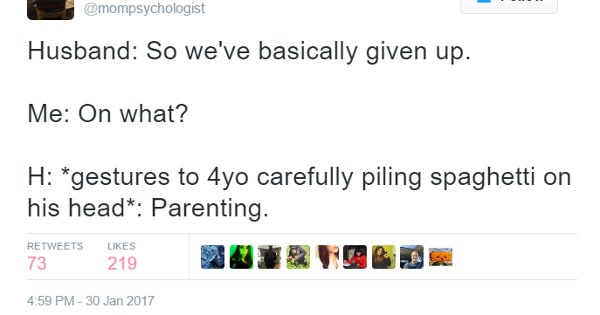 Parenting is all fun and games until the destruction and stress of looking after tiny humans kicks in. Don’t worry — the funny parents of Twitter are here to make you smile with their truly terrible parenting stories.

My 4-year-old's timeline for getting dressed:

My daughter just asked me why a pinecone isn't shaped like a cone, and I had no choice but to fake a seizure.

6yo: *bends the laws of space and time to make 5 minutes last 4 hours*

Husband: So we've basically given up.

H: *gestures to 4yo carefully piling spaghetti on his head*: Parenting.

9: This sucks! I hate you! I wish you weren't my parents!

wife on Facebook: 9 is doing the laundry! He's such a good helper!

Parenting multiple kids is mostly just trying to keep the awake ones quiet enough that the sleeping ones stay asleep.

My 6 year old's superpower is knowing he doesn't like what we're having for dinner 2 hours before I've even decided what I'm making.

Toys need to be priced according to how long your child will actually play with them.

Take the road less traveled. Like, the one with the most mud, or the wettest grass, even if there’s a sidewalk nearby.

My son was crying and asked, "why doesn't the dog have to wear pants?" And it's like, I don't even know. So now I'm putting pants on a dog.

wife: Let's fool around after the kids go to bed
narrator: But they never did fool around

Why I should accomplish all my goals today:

My toddler eats with her right hand but is ambidextrous when it comes to total destruction.

One of the hardest parts of teaching your kids to be independent is watching them tie their shoes for 8 minutes.

"There's no school or work tomorrow, so you can sleep in," I begged my 4-year-old.

Being a parent is making everything easier for your kids while your kids do the exact opposite for you.

"DON'T YELL AT ME FROM ACROSS THE HOUSE, JUST COME TELL ME WHAT YOU NEED!!!" I scream from the couch in the living room.

My 4 year old spilled water on his bathing suit, so he can't go in the pool until he changes and this is why vodka is a thing.

I'm just a mom, standing in front of my husband, trying to say something that I can no longer remember cause my kid interrupted us 75 times.