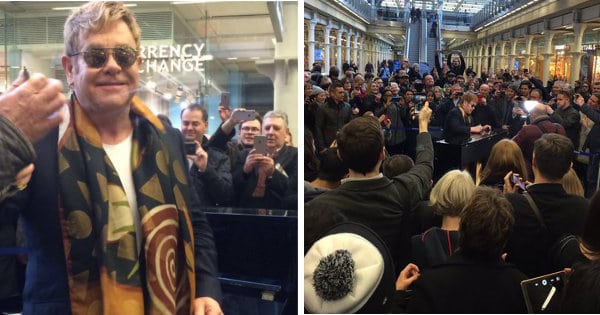 It’s not every day you’re passing through a busy London station and happen upon Sir Elton John busking, but that’s exactly what happened on Thursday afternoon.

The pop star gave commuters passing through St Pancras International Station a bit of a surprise.

And happily posed for photos as he dropped off a signed piano for the station (as you do).

Great surprise from @eltonofficial who made an appearance at London's #StPancras & gifted a signed #Yamaha piano! 🎹 pic.twitter.com/OfSQ5lbNkR

He caused a bit of a stir.

And happily knocked out some tunes.

@eltonofficial playing the #Yamaha piano he gifted and signed at #StPancras today! pic.twitter.com/FVgDourh0W

And got a big cheer at the end.

Elton’s signed piano is free for anyone to play in the station.

A wonderful gift from an incredible musician and absolute legend – thank you @eltonofficial! pic.twitter.com/QEvRfhc9bA