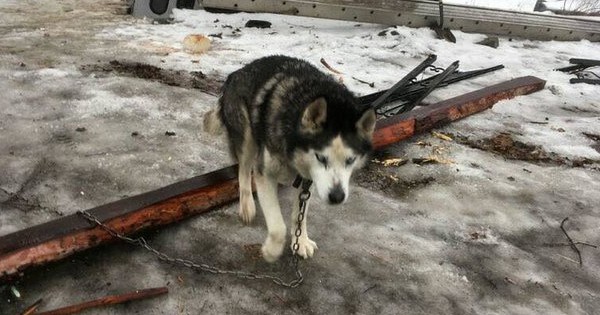 This 15-year-old husky has never been inside a house. Rather, he’s spent his entire life chained up outside of one. 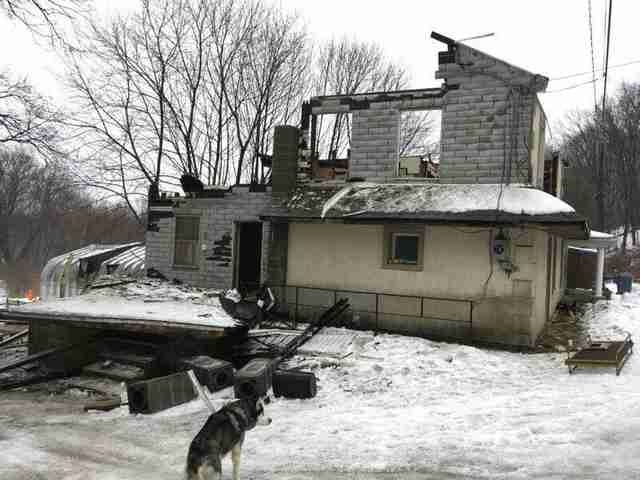 In February, emergency workers rushed to a demolition area in New Philadelphia, Pennsylvania, after a roof collapsed on a broken-down home. While they were there, the workers noticed the dog was chained.

In Pennsylvania, it is illegal to keep a dog chained outside for more than nine hours a day. 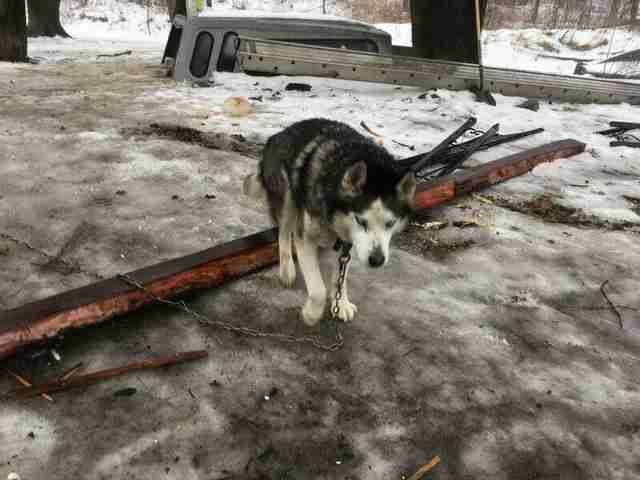 The owners of this poor husky were breaking all the rules. 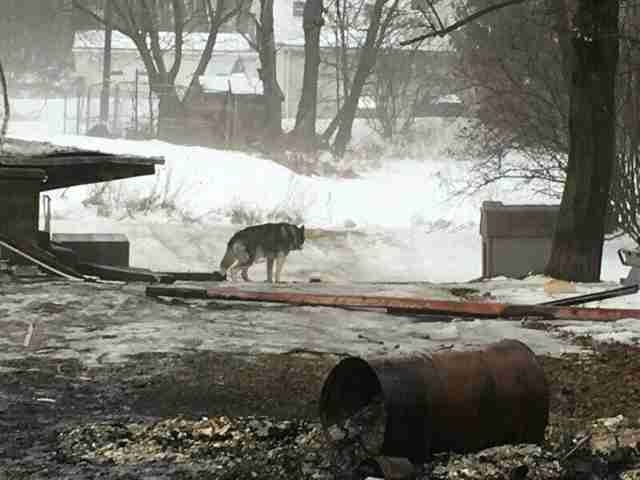 It was freezing outside, and the ground was covered in snow and the dog’s own pee and feces. The only shelter he had was a car roof-turned-dog house. 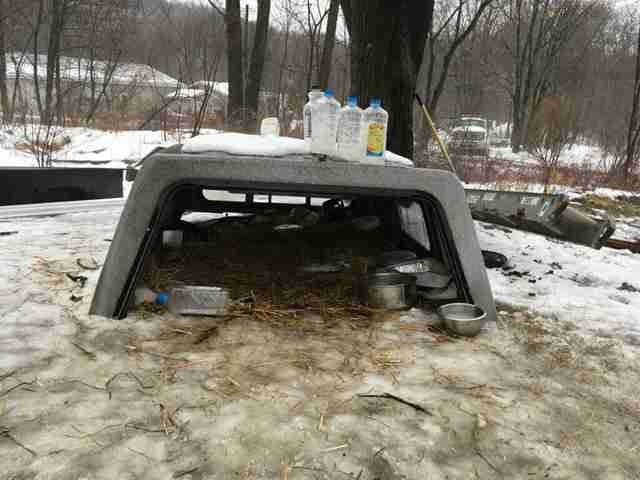 Rescue workers from Hillside SPCA, an animal welfare organization and shelter, arrived as soon as they could. When they explained to the owners that they were breaking the law, the owners surrendered the dog, named Cloud, to them.

“When we met Cloud, we were in shock at his condition,” assistant shelter manager Tricia Moyer shared. 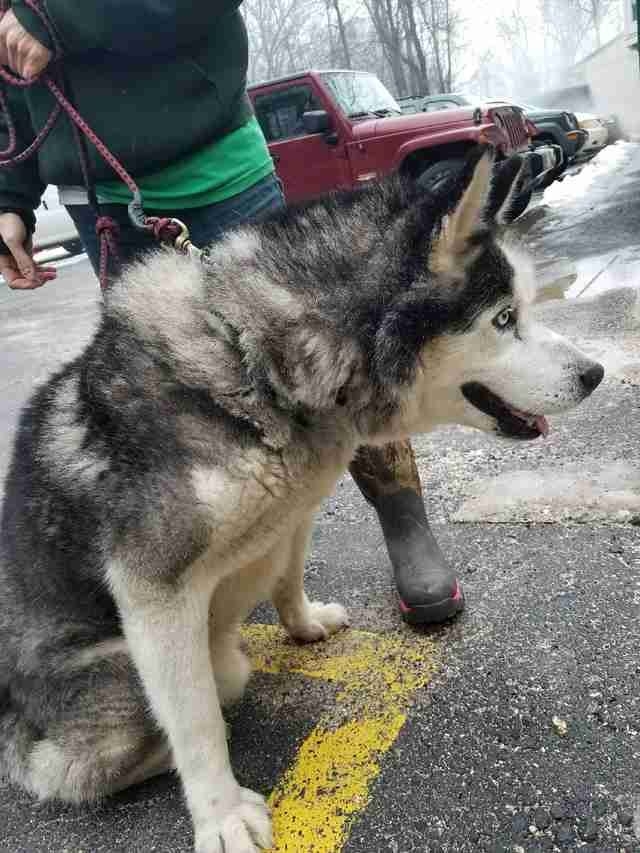 “He was a broken, sad shell of a dog. His fur was thickly matted. He had a large mass on his hind end and he was very thin.”

The rescue team got Cloud checked by a vet. They found out that the mass on his back end was a tumor. Based on Cloud’s age, surgery was not a safe option. The vet also found that Cloud was deaf.

Cloud also wasn’t coping well with the shelter environment—he needed to be with a family. 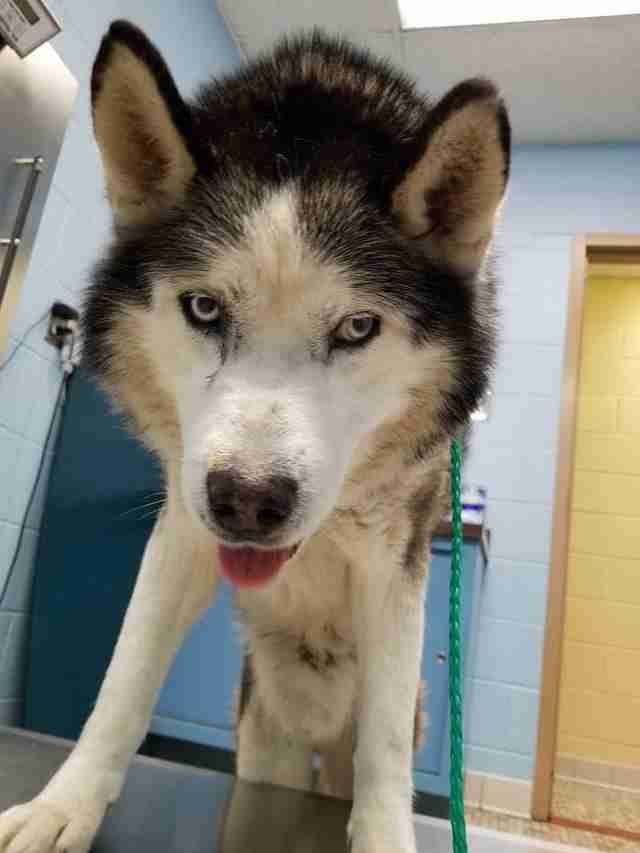 Tricia Moyer got in touch with Eleanor Garrett, co-chair of Senior Dog Haven and Hospice, to see if she could foster Cloud.

“Tricia was pretty upset,” Eleanor shared. “She sees dogs in all kinds of conditions, but she said, ‘This dog wasn’t acting like a dog at all, he’s just a mess. He’s walking into things.’ I don’t think he’d ever been inside anywhere in his life, so he was just so out of sorts.”

Eleanor agreed to take in Cloud, but bringing him into her home didn’t immediately solve things. 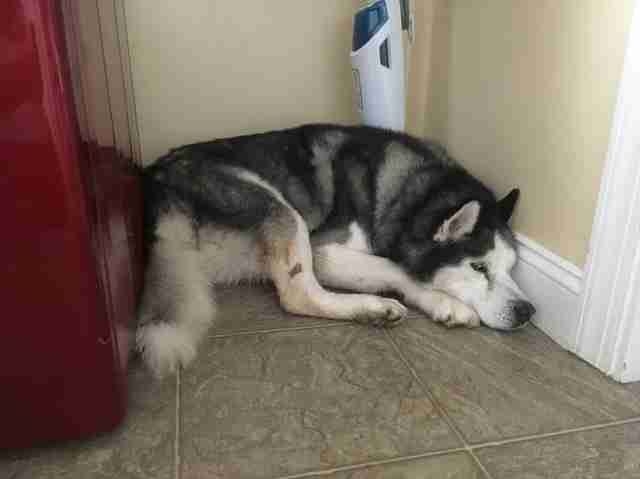 “He wouldn’t stop pacing, he wouldn’t stop moving. I had him in my house, and he was knocking things over. He was running into things, and I thought, ‘Oh no. This is going to be difficult.’”

Cloud also tried to avoid any interaction with Eleanor and her three little kids. 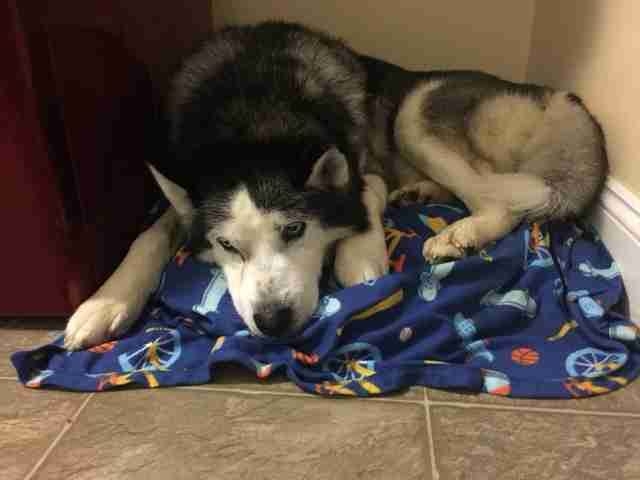 “He wouldn’t interact with us, and if you tried to go over to him, he’d just hide in the corner. He found a spot in my laundry room next to my dryer. There were things next to it, and he knocked it all over—it was almost like he was trying to get behind the dryer to hide. He stayed like that for over 24 hours.”

Instead of forcing Cloud to come out, they left him alone for a while, and it seemed to do the trick. 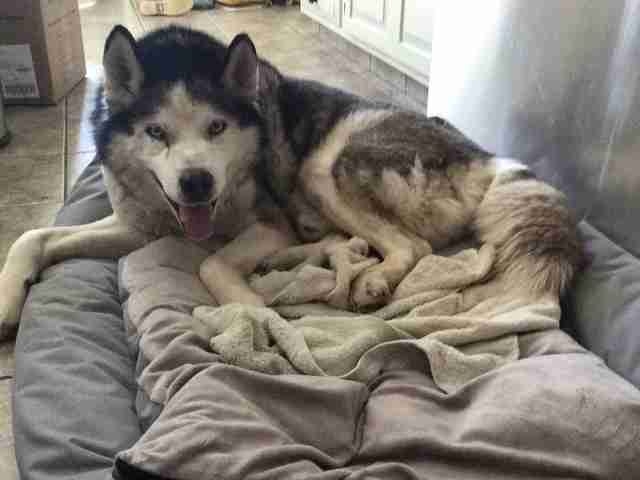 “I was in my laundry room getting something and all of a sudden, I felt this little swipe of a paw on my foot. I looked down, and he was swiping at me to try and sit down and pet him. So I sat down and I started petting him, and he started giving me kisses, and anytime I stopped, he would swipe his paw at me again.”

Eleanor said that despite his age, Cloud still had a lot of learning to do. For instance, he didn’t know how to come back inside the house after going out to the fenced yard to do his business.

Eleanor doesn’t take all the credit for Cloud’s newfound friendliness, though. She believes her six other dogs, Izzy, Charlie, Boo, Casper, Riley, and Sue, were a huge help. “It was almost like my dogs were teaching Cloud how to be a dog.”

Eleanor’s home though was always meant to be a temporary one for Cloud.

When a couple contacted Eleanor about adopting Cloud, they set up a meet-and-greet. 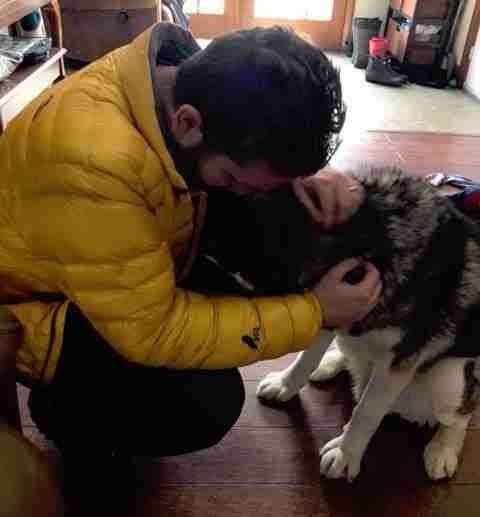 And it was an instant success. 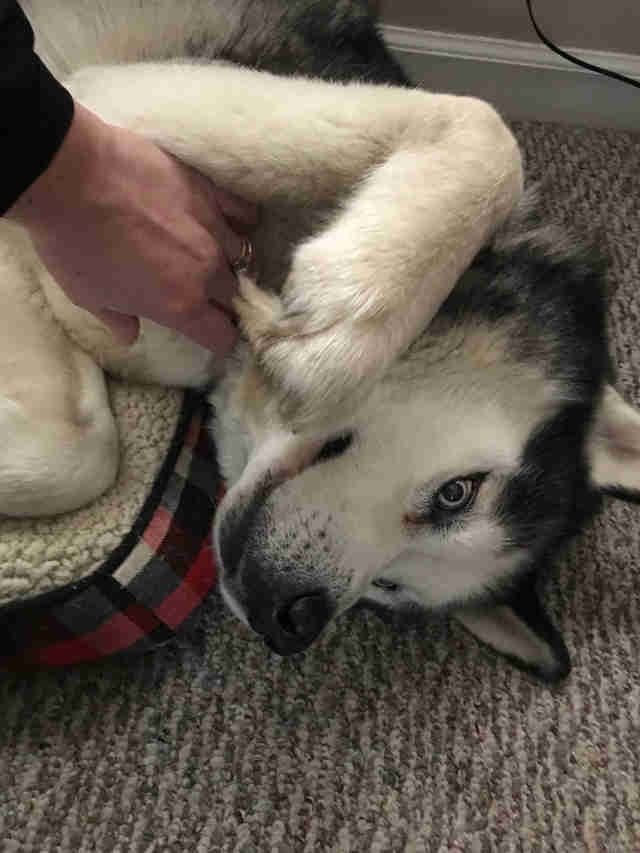 “The husband leaned down to pet him, and Cloud got up and gave him a big kiss in the face, and the husband was like, ‘All right. We can do this. We’ve got to take him. We’re definitely taking him,’” Eleanor shared. 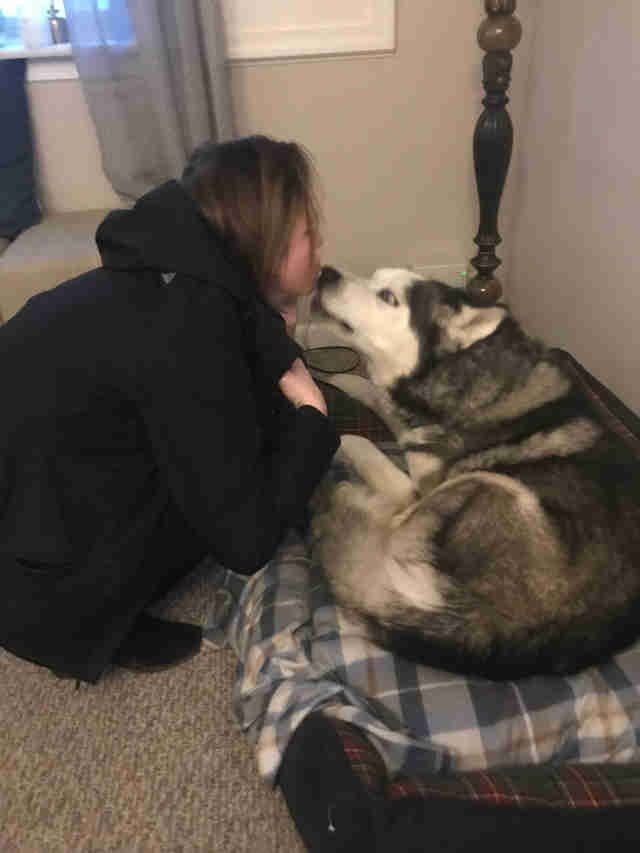 This time, it was much easier for him to adjust, and he didn’t waste any time making himself comfortable.

“They’ve created a bucket list for him, so they’re working on all sorts of things that Cloud never got to do in his entire life. He’s been going on walks—I don’t think he’s ever been walked before and he loves it. They got him a big orthopedic bed. Someone contacted them about doing a photo shoot. Somebody else contacted them and said they could offer a doggy massage.”

Cloud doesn’t just have a new home, he also has a new name—Titus. For the first time, he’s finally enjoying life.