NASCAR and Daytona race fans have looked forward to the Coke Zero Sugar 400 (more commonly known as the Coke Zero 400) event that has been held annually since 1959. This stock car race was first staged at the Daytona International Speedway with 160 laps, running for 400 miles (640 kilometers).

It is currently the second of the biggest stock car races held at the Cup Series circuit at Daytona. The first one being the Daytona 500 held in February.

Since its first run and until 2019, the Coke Zero Sugar 400 was held around or during the US Independence Day weekend with a few exceptions. It was scheduled on the 1st Saturday of July in 1988 up to 2019, considering the closest day to July 4.

The Story Behind The Name

Contrary to its current name, the race was not originally called the Coke Zero Sugar 400. It was known as the Pepsi 400 for many years. The event used to be sponsored by PepsiCo from 1984 until 2007.

Coke became the exclusive supplier of beverages in the tracks of the ISC, including Daytona. As part of this deal, Coke was also granted sponsorship title for the rights to the race. Consequently, the event was named Coke Zero 400 after the Coke Zero brand.

The Coke Zero Sugar 400 has had a long and colorful history. Besides making big names in the racing scene, it’s past is something worth revisiting.

Even before the opening of the Daytona track, including the first Daytona 500, there were already plans to stage a 300-mile USAC Championship for Indycars. Unfortunately, that event was not pursued. Instead, the Daytona 500 and the Firecracker 250 were first held in the same year, 1959. Since then, with few changes in schedules, the Daytona 500 heralds the start of the NASCAR season, while the current Coke Zero Sugar 400 is the final race of NASCAR’s regular season.

The Indycar event was scheduled for Independence Day weekend of 1959. The race was scrapped due to the high speeds and crashes, which led to the death of 2 drivers. In place of the Indycar races, Bill France Sr. organized a NASCAR race over 100-laps covering 250 miles on the Daytona track. It was named the Firecracker 250, referring to the July 4 fireworks.

After four years of growing attendance, the race was expanded to 160 laps and 400 miles. The race was renamed Firecracker 400 to reflect the race distance, and the name was used from 1963 to 1984.

Although the Firecracker 400 remained a mid-season race, it has seen technological advancements to improve speed and safety. In 1966, the first rear spoiler was used. The 1965 NASCAR Rookie of the Year driver, Sam McQuagg, won the Firecracker 400 on a 1966 Dodge charger fitted with a rear spoiler. The spoiler made the car more aerodynamic and cut off precious seconds in lap times. McQuagg finished more than 66 seconds ahead of second-place finisher Darel Dieringer.

For safety reasons, restrictor plates were first used in 1988. This followed the introduction of a smaller carburetor specification for the 1987 race. These measures were introduced for safety purposes following Bobby Allison’s crash at Talladega. On July 4, 1987, Ken Schrader flipped his car as the racing field crossed the finish line. These unfortunate accidents prompted the organizers to include safety in the above safety measures.

Restrictor plates were first introduced in NASCAR races in 1971. These were a source of controversy because of issues with different engine sizes and specifications. The restrictor plate allows for less air to flow through the carburetor, effectively restricting a car from reaching top acceleration and speed. This, in turn, leads to slower times and a safer race.

The 1998 race was planned to be a milestone introducing innovations that would improve attendance and TV viewership. A lights project was started in 1997 to allow for night racing. The 1998 race was also slated to be the first night-time race with restrictor plates. Unfortunately, 1998 saw wildfires raging in Florida, and the race was postponed, while the Daytona raceway was used as a firefighter staging area. The race was moved to October and returned to July the following year. It has remained as a night race.

In 2008, Coke became the official exclusive beverage sponsor of ISC events. With the signing of the contract between ISC and Coca-Cola, the race became known as the Coca-Cola Zero 400. The name was used for ten years. In 2018, NASCAR, ISC, and Coca-Cola signed an agreement to renew and extend the sponsorship for another six years. The race name will remain as a signature Coca-Cola NASCAR sponsorship until 2023.

Even before the sponsorship, Coca-Cola has been involved in NASCAR racing for over fifty years. The NASCAR branding has wide name recognition and weight in the United States, particularly in the southern states. 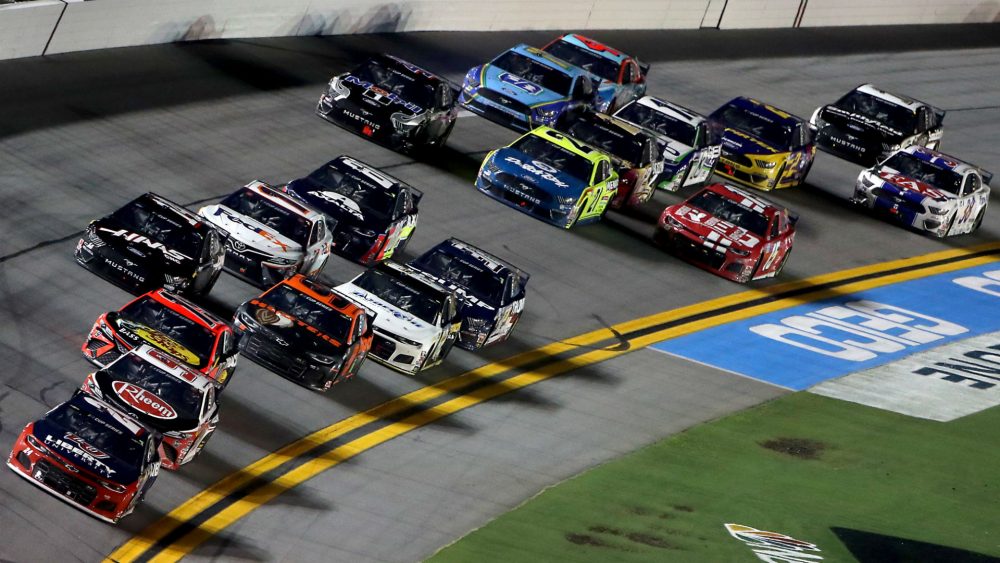 In 2018, Coke rebranded Coke Zero to Coca-Cola Zero Sugar, the race name followed suit and was also renamed the Coke Zero Sugar 400. In recent years, the race has become well-known for its close finishes, multiple high-speed vehicle crashes under the night lights, and the impressive fireworks display during the post-race celebrations.

The rebranding from Coke Zero to Coca-Cola Zero Sugar is not just a change in names. The name itself underlines the zero-calorie and no sugar content of the drink. At the same time, it was reformulated to taste more like a regular Coke drink. Using the Coca-Cola Zero Sugar brand on one of the most important NASCAR races puts further emphasis and reach for the drink. It creates an image and message to NASCAR fans. Coca-Cola has the perfect market for Zero Sugar with the two hours 400-mile race at the Daytona International Speedway.

Past Winners of the Coke Zero 400

The Coke Zero 400 has produced numerous of today’s iconic drivers’ first career NASCAR Grand National/Cup Series victories. Below are the past winners since the first race in 1959, down to the lastest race.

David Pearson overtook Jack Smith on the 1961 annual Coke Zero 400 under John Masoni’s team driving a Pontiac. Years later, he took over Bobby Isaac and won the Coke Zero 400 race for three consecutive years, starting from July 4, 1972, to July 4, 1974, managed by Wood Brothers Racing for those years. Pearson drove a Mercury throughout his three wins.

David Pearson snatched his fifth win on July 4, 1978, managed by the Wood Brothers Racing team again—and drove Mercury to victory, just like he did back to back a few years earlier.

A.J. Foyt got dethroned by Sam McQuagg on July 4, 1966, where he drove a Dodge to victory. Ray Nichels’ team managed Foyt at the time.

Cale Yarborough won the Coke Zero 400 on July 4, 1967, and 1968, where he was coached by the Wood Brothers during the two years, earning him two swift victories. Yarborough drove a Ford in 1967 and a Mercury in 1968. After several years, Yarborough made a comeback on July 4, 1976, snatching yet another Coke Zero 400 win. He was run by a team managed by Junior Johnson & Associates and won the event using a Buick.

Cale Yarborough made yet another comeback on July 4, 1981, managed by the M.C. Anderson Racking team, and drove a Buick to another win.

Donnie Allison won the Coke Zero 400 race on July 4, 1970, under Banjo Matthews’ team, racing his way to victory with a Ford.

Richard Petty stopped Pearson’s streak by winning the Coke Zero 400 on July 4, 1975, where he had a team under his own company, Petty Enterprises. Petty drove a Dodge during his race. Petty won the Coke Zero 400 race again on July 4, 1977, marking his second win. He had a team under his company, Petty Enterprises, the same year and drove a Dodge again.

Richard Petty won his last Coke Zero 400 race on July 4, 1984, managed by the Curb Racing Team, and drove a Pontiac to victory.

Tim Richmond grabbed the crown and won the Coke Zero 400 race on July 4, 1986, under Hendrick Motorsports, sporting a Chevrolet on the track.

Another contender, Bill Elliot, won the Coke Zero 400 race on July 2, 1988, under the Melling Racing team using a Ford. Elliot snatched his second win three years later on July 6, 1991, managed by the same team and sporting the same stock car—Ford.

One of the best NASCAR drivers of all time, Dale Earnhardt won his first Coke Zero 400 on July 7, 1990, working alongside Richard Childress Racing driving a Chevrolet. Earnhardt grabbed another win three years later on July 3, 1993, under the same racing team and the same stock car.

Currently an announcer for Fox NASCAR and executive of Hendrick Motorsports, Jeff Gordon won three Coke Zero 400 races in his racing career, with the first one being on July 1, 1995, next on October 17, 2004, and the first two-day event on July 3 to 4, 2004. He worked alongside his company, Hendrick Motorsports, and drove the same stock car during his three wins—the Chevrolet.

John Andretti won several races throughout his career, with NASCAR being the most notable one, and won his only Coke Zero 400 race on July 5, 1997, working alongside Cale Yarborough Motorsports driving a Ford.

The Future of Coke Zero Sugar 400

Coca-Cola is an avid supporter of major sports and NASCAR is one of their top endorsement deals. Their deal with ISC and NASCAR was primarily noteworthy because they replaced PepsiCo. Additionally, Coca-Cola is the exclusive beverage supplier for all the NASCAR and ISC events. The Coca-Cola Zero Sugar 400 has become a culminating activity where the teams and drivers are motivated to win. As the last race in the regular season, a good performance at the Coca-Cola Zero Sugar 400 gives the driver a big chance of making it to the playoffs.

For the foreseeable future the prestigious race will remain as the Coca-Cola Zero Sugar 400 with the continuing sponsorship of Coca-Cola up to 2023.

Since its inception in 2019, the Coke Zero 400 was usually held on or around the U.S. Independence Day at the Daytona International Speedway. From 1988 to 2019, the race was scheduled during the first week of July, typically any day closest to July 4. However, in 2020, because of the coronavirus pandemic, the event was held on August 29. It serves as the regular-season finale before the NASCAR playoffs.

What Time Does the Coke Zero 400 Start?

What Channel is the Coke Zero 400 on Direct TV?

The Coke Zero 400 broadcasts on all NBC channels, including but not limited to MSNBC and NBC news, and you can also stream the event live on fuboTV and Hulu with Live TV. However, the network’s availability varies in different markets—so, make sure to check local listings.

How Many Drivers Won Both The Daytona 500 and The Coke 400 in the Same Year?

Jimmie Kenneth Johnson or more popularly known as ‘Jimmie Johnson,’ is a professional race car driver and seven-time NASCAR Cup Series winner, completing his full time in the NASCAR series starting from 2002 and ending it in 2020. He’s most famously known to drive a No. 48 Hendrick Motorsports Chevrolet and has won a Daytona 500 and one Coke Zero 400 race in the same year, 2013. Johnson is the last driver to sweep Daytona Cup races in one season—and the only racer who won a Daytona 500 and Coke Zero 400 in the same year.

What is the Most Popular Car Number To Win the Coke Zero 400 at Daytona?

The most popular car number of winning is number 21, made iconic by David Gene Pearson, the five-time Coke Zero 400 winner, boasting three consecutive wins, which has never been beaten, making the popular number choice among fans. He drove a No. 21 Mercury throughout his career under the Wood Brothers Racing organization, the number one racing team, boasting nine Coke Zero 400 wins alone.
The number 28 is also a popular choice among race car fans as it was once the number, legend Cale Yarborough adorned on his race cars where he won 4 races on the Coke Zero 400.

How Many People Go to Coke Zero 400 in Daytona Beach?

The Daytona International Speedway venue can hold up to more than 100,000 spectators, and it usually gets packed during the finale season. However, the latest Coke Zero 400 race only drew around 20,000 onlookers because of the pandemic. However, the people at NASCAR made a goal of having at least 20% of the venue packed, and they’ve exceeded that goal, going slightly past the 20,000-mark. This figure includes the campers in the infield.