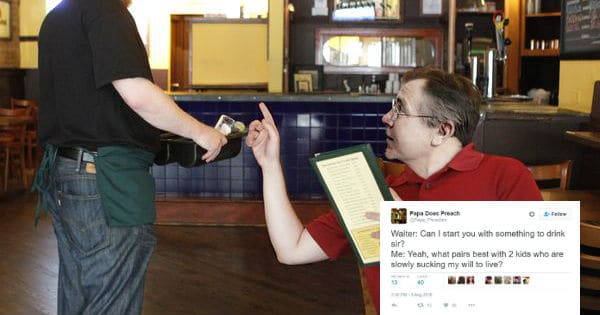 if my kid pushed any more buttons, I'd be an elevator..

Waiter: Can I start you with something to drink sir?
Me: Yeah, what pairs best with 2 kids who are slowly sucking my will to live?

"How was your vacation?"

Me: You can't like Kylo Ren. He killed his dad.

5-year-old: Maybe he deserved it.

4yo: Did Mommy say it was ok?
Me: Daddy said it was ok, and Daddy's in charge
4yo: *whispers* not all the time

I have a wife & 2 daughters, all I want is 1 morning where someone isn't walking around the house on the verge of tears looking for a shoe.

Apparently a 2 year old getting her hair washed and an exorcism sound oddly similar.

Nonparent: My apartment’s so cluttered. I really need to sort my mail.
Parent: We have a child’s toilet in the living room.

I didn't even know I could screw up a scrambled egg. But here we are & my daughter is loudly telling her dolls that's exactly what I've done

Whenever I have a snack I turn on the faucet so my son doesn't hear the bag crinkle because parenting makes you a prisoner in your own home.

I just found spaghetti in our heating ducts if any of you were thinking of having children.

"No man in his own home should have to choose between Frozen or Barbie band-aids" I yell to no one in particular.

Having kids is like living with an on-line troll you can't unfollow.

I can't tell if my baby is a slow clapper or is starting a slow clap to mock my parenting.

#18. We definitely want to avoid that.

I've been carrying an acorn in my pocket for 3 months; I never know when my son might want it back & I want to avoid a meltdown. PARENTING!